About a week and a half ago, I did a post on my Facebook page, The Graphite Art of Terry Miller, that highlighted six works in what may very well turn out to be a much larger series of works all based on a similar theme, not unlike the idea behind the 45 works I did in preparation for my solo exhibition with the Woodson Art Museum in the summer of 2008, Unknown Bridges. Those not-quite four dozen works all had the abstract qualities of bridges and their structure as the 'base line' for the works produced, and this latest series all have a connection in that they revolve around pattern, texture, light and shadow variation and a main theme - the intricacies of the oriental pattern rugs scattered around my house!

That idea of using the stylish patterns of those rugs as a major design element came about one morning a little over a year ago as I sat in my studio and looked across to the floor in the dinning room and noted the wonderful strong contrasts between the sunlight casting through the window and falling across the the rug making for intense light/shadow variations in very abstract shapes. I immediately knew those distinct contrasts would make for striking compositions. It was only a matter of finding the right subject to insert into those interesting abstract shapes to make for an interesting compositional idea and give a strong focal point.. Having had several cats living with me over the years, I thought that to be the purr-fect fit! With no current in-house resident kitty, there are several neighborhood felines that hang out in my backyard watching the birds at the feeders, so reference was directly at hand.

As a result of that initial idea, I've completed six works so far over these last months and expect at least an equal number of new works devised around this theme to come off the drawing board over the next year or so, maybe more (I've still a few rug patterns in the house that have not been 'featured' and the spark of interest in this idea continues to burn brightly). 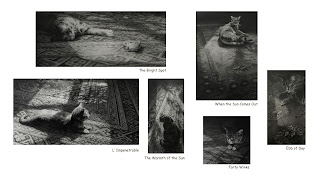 After posting the images of the works on my Facebook page, an artist friend was very gracious to want to share that post on her own Facebook page and noted how my 'series' idea was reflective, in her words. of Monet's famous Hay Stack paintings. Well, to have my idea of encompassing a series of similar themed works compared, even in a remote way, with that of Monet was very ego stroking to say the least, but it also got me thinking about the various thematic series he developed over the years and how many other artists find ideas and inspirations they feel a strong motivation to follow, letting that path take them to wherever it may.

Of course, some of the most famous series of paintings developed by Monet were his Hay Stacks, perhaps two dozen or a few more, all based on his observations of the way light, atmosphere and shadow changed and effected the colors he saw while painting directly en plein air. Below are six examples from that series which very distinctly show how he was able to capture the play of light at various times of day and various seasons. 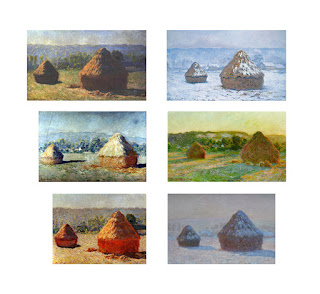 By no means would I even hint at comparing my monochromatic scratchings with the vaunted Master's output, but to make the point that, sometimes, artists latch on to an idea that so invades their creative psyches, it almost becomes an obsession; allowing for a complete exploration of that singular idea to run its course almost till exhaustion. I know I've not yet exhausted the possibilities of combining rug patterns and kitties and light and shadow and slightly abstract viewpoints, all through a more thematic approach, and it seems, neither did Monet in his explorations of other 'themes'.

During his time in England, he brushed a wonderful series of the effects of light and the time of day on the Waterloo Bridge, with the four shown below as just a few examples of the vast output in that thematic series. 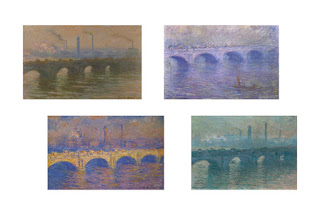 And then, of course, toward the end of his life, he made a very studied series in his Water Lily paintings, only six of which are depicted here. 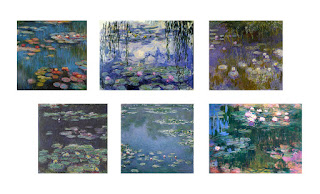 As I've said, I foresee at least another half dozen works yet to come before I may feel like I've exhausted the possibilities of combining rug patterns with kitties, light and shadow, and interesting viewpoints and compositional structure without becoming overly repetitive or boring myself at the drawing board. And then again, who is to know what other inspiration may force me down the path to another series of thematic works - hay stacks? - water lillies? I've already done 'the bridge thing'!

Posted by Terry Miller at 12:08 PM No comments:

Here are the 'rules' for this Saturday's offerings during my One Day Sale which will only be available on my Facebook page, The Graphite Art of Terry Miller.
Beginning at 11AM Eastern, I'll post an album which will consist of small works being offered for 12 hours till 11PM at special prices. Each work will have its own listing showing image size, matt or frame size and price. The price shown will include US Priority Mail shipping to a continental US address, outside of that area will require additional shipping charges to be determined. The first person who types "sold" in comments will be the new owner of the work. Feel free to acquire more than one work and if a work is sold before you have had a chance to grab it and would like to discuss a commission of a similar size/subject/price work, just type in "second call" in comments and I will be in touch to discuss. I'm happy to accept payment through Pay Pal or a personal check and I will settle up with all purchasers after the sale has closed. Thanks for looking in and good luck!
Posted by Terry Miller at 3:33 PM No comments: