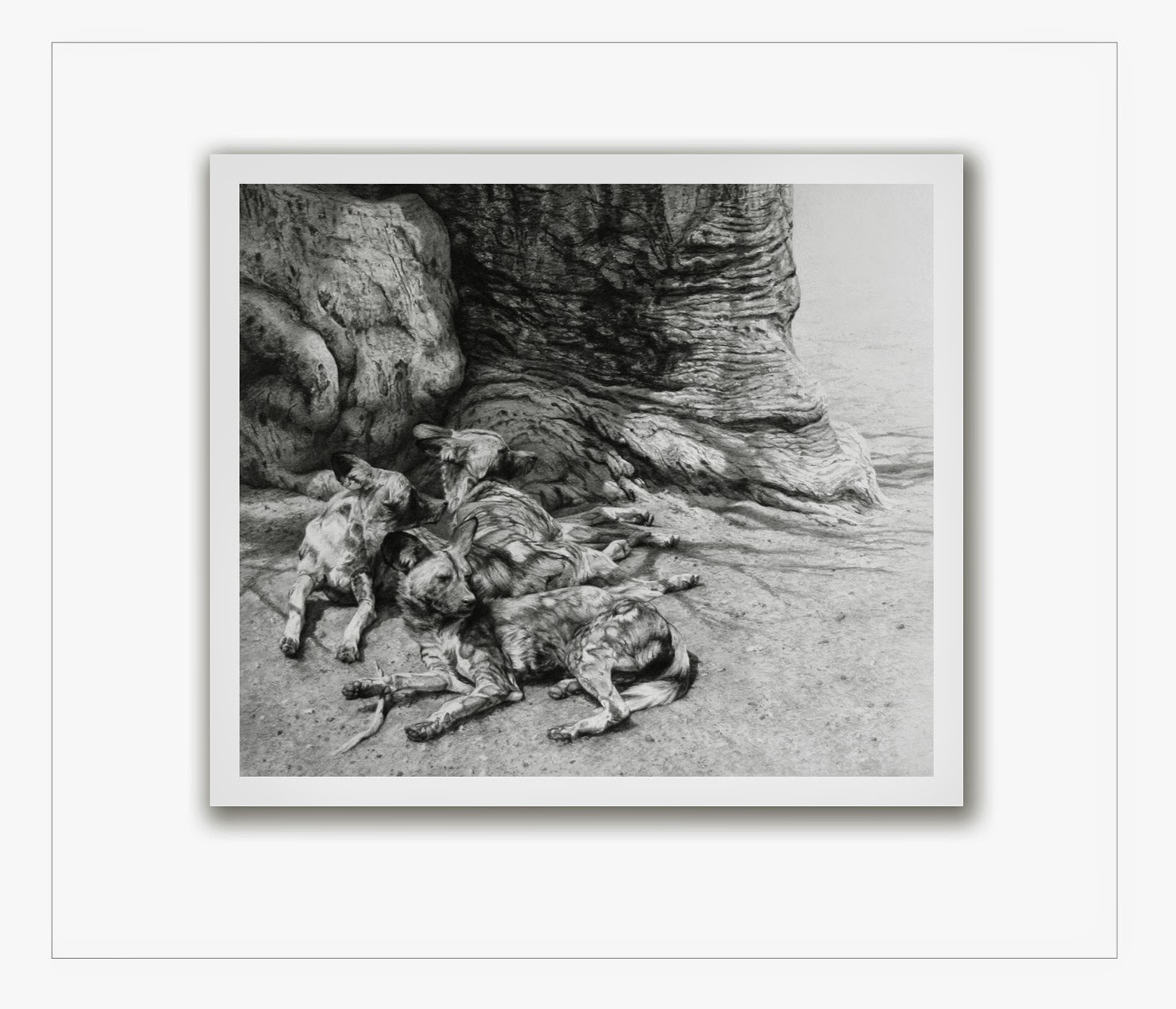 Completed yesterday, "Out of the Shadows" (image size 14" x 16 1/4") is the second of the two wild dog works I have been at work on this month. They will be framed this week and be off to be reviewed for possible purchase. Having included baobab trees in four of the last six works I have done so far this year, maybe I have finally gotten that texture out of my system? Doubtful, but maybe time to set that texture aside for a bit and consider some other interesting textures to try my hand at.
Posted by Terry Miller at 9:19 AM No comments: 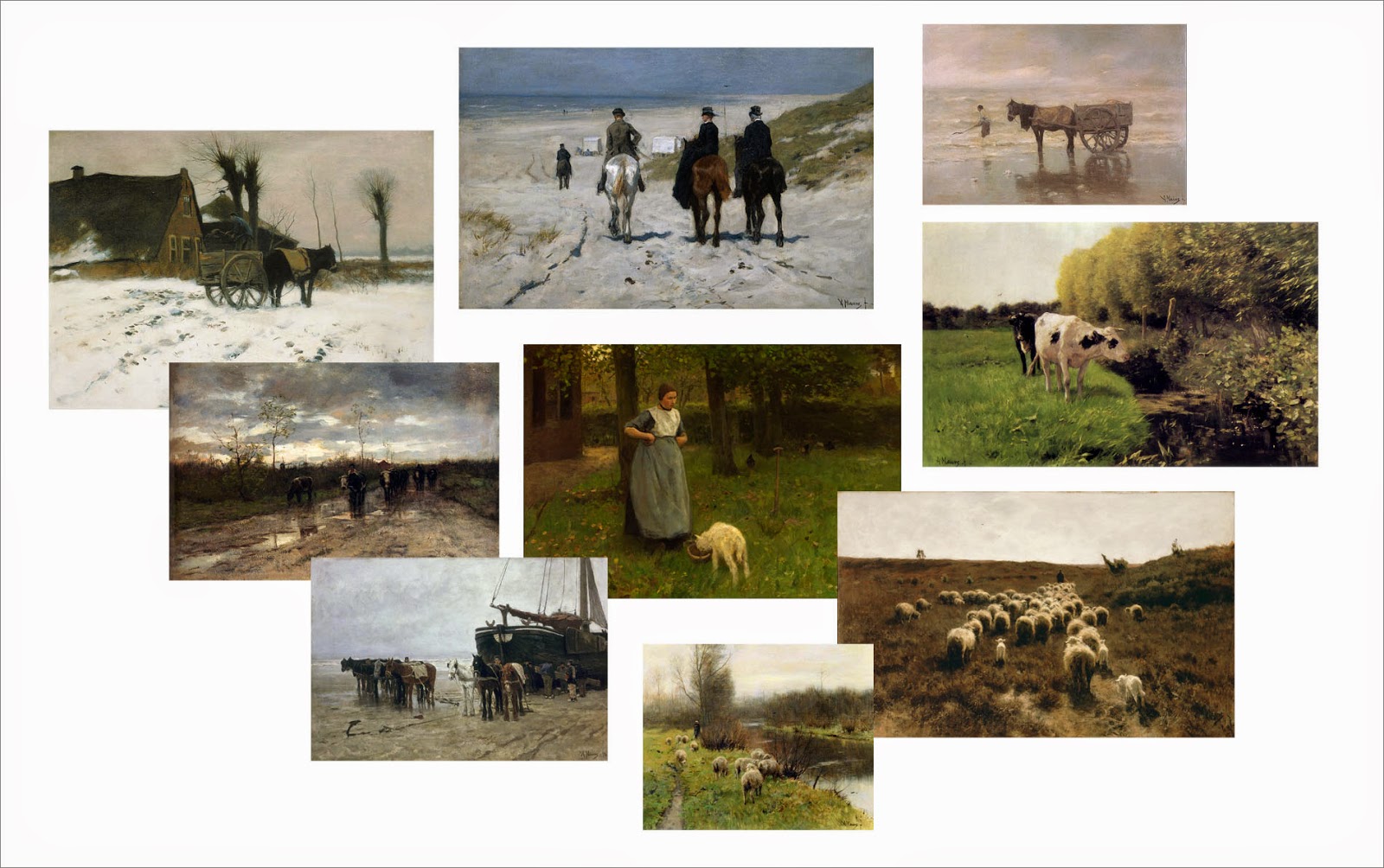 Having recently finished reading Irving Stone's Dear Theo: The Autobiography of Vincent Van Gogh, a wonderful read by the way and completely based upon Vincent's letters to his brother throughout his short life, I was intrigued with the mention of several artist's names with whom I was not completely familiar. One of those artists was Anton Mauve who was a cousin-in-law to Vincent. Mauve, born in 1838, lived till 1888, just two years before Vincent's tragic death. Vincent studied with his cousin-in-law for about a month in 1881 but their relationship came to a cold separation about a year later, after Mauve had been an encouraging influence the whole of that year, and they never really spoke much after that.

I was anxious to 'discover' Mauve's work and make a connection with that of the earlier works of Van Gogh, as mentioned in the book, and spent some time this morning digging around on the Internet to find images of some of Mauve's works. The little montage above shows several of his works that really caught my eye and spoke to me as an artist as I was very drawn into them for their compositional ideas, obvious subject matter and their very atmospheric reading of the Dutch landscape and life of the times. More exploration into his body of work will follow for me, but for now, I just wanted to post this for those who, as I, may not have known the name or the work before as I think he has much to offer in the way of introducing aspects of what was yet to come in those who followed him toward the end of the 19th Century.

As a little extra, the work below, Beach at Scheveningen an early watercolor by Van Gogh, was done during the time he was influenced by his cousin-in-law and several other Dutch landscape and genre artists who were popular and noted at the time, and before Vincent developed his truly iconic painting style. 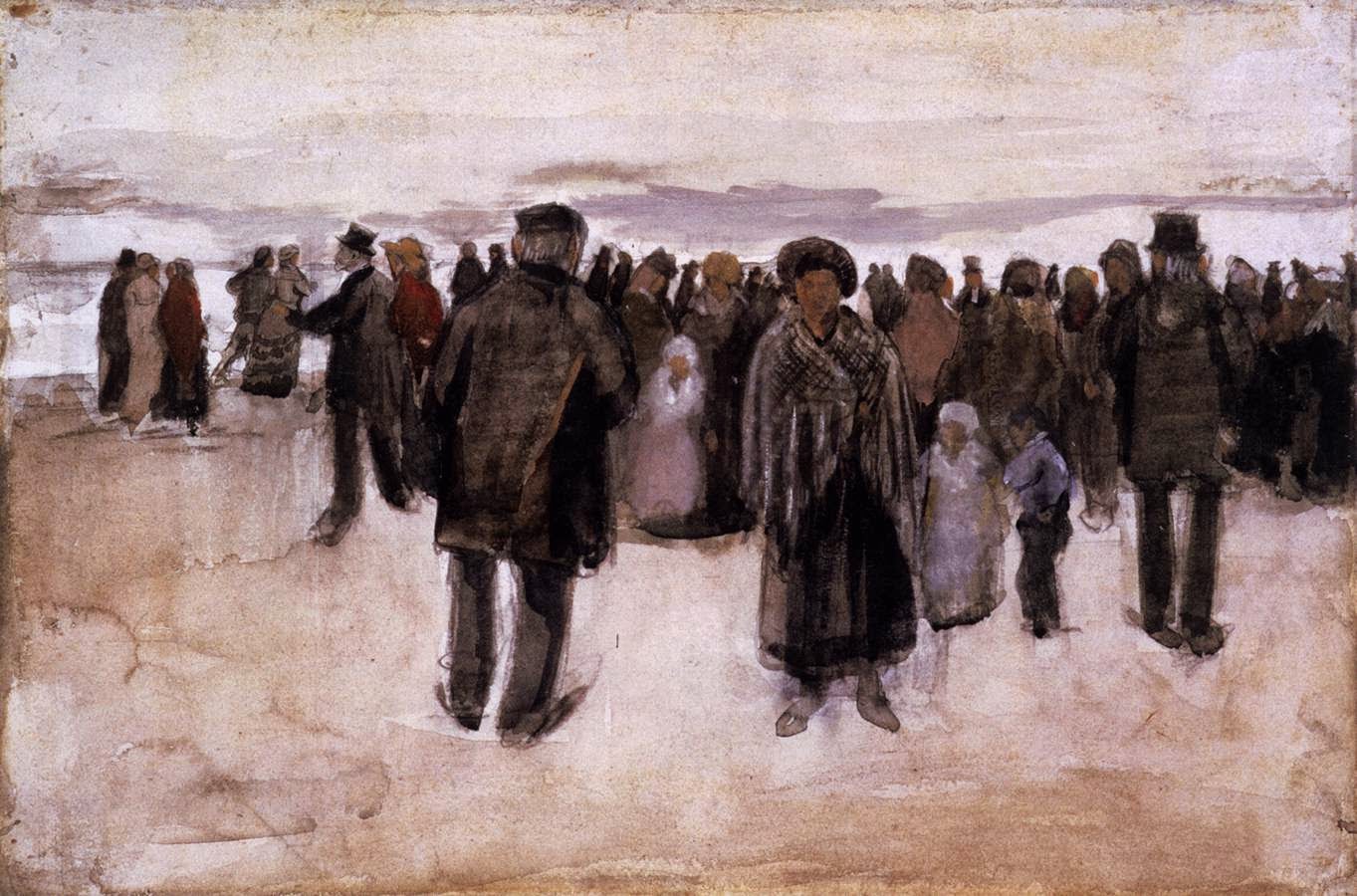 Posted by Terry Miller at 10:33 AM No comments: 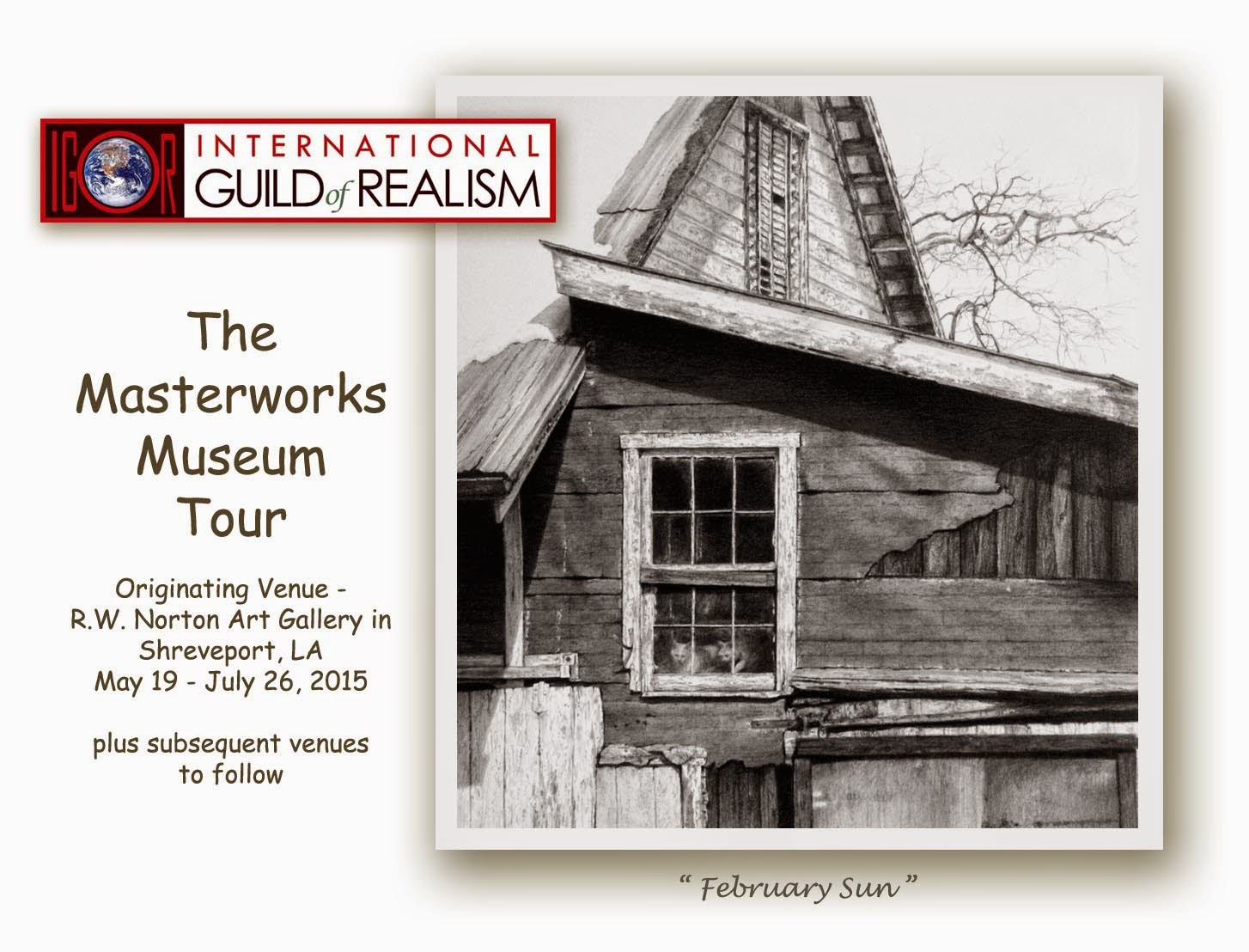 Rather pleased to announce one of my works, "February Sun", will join 69 other works selected from something like 250 submissions for the International Guild of Realism's upcoming Masterworks Museum Tour which begins its travels in Louisiana in a couple months time. I'll update the tour schedule as the subsequent venues are established.
Posted by Terry Miller at 2:46 PM No comments: 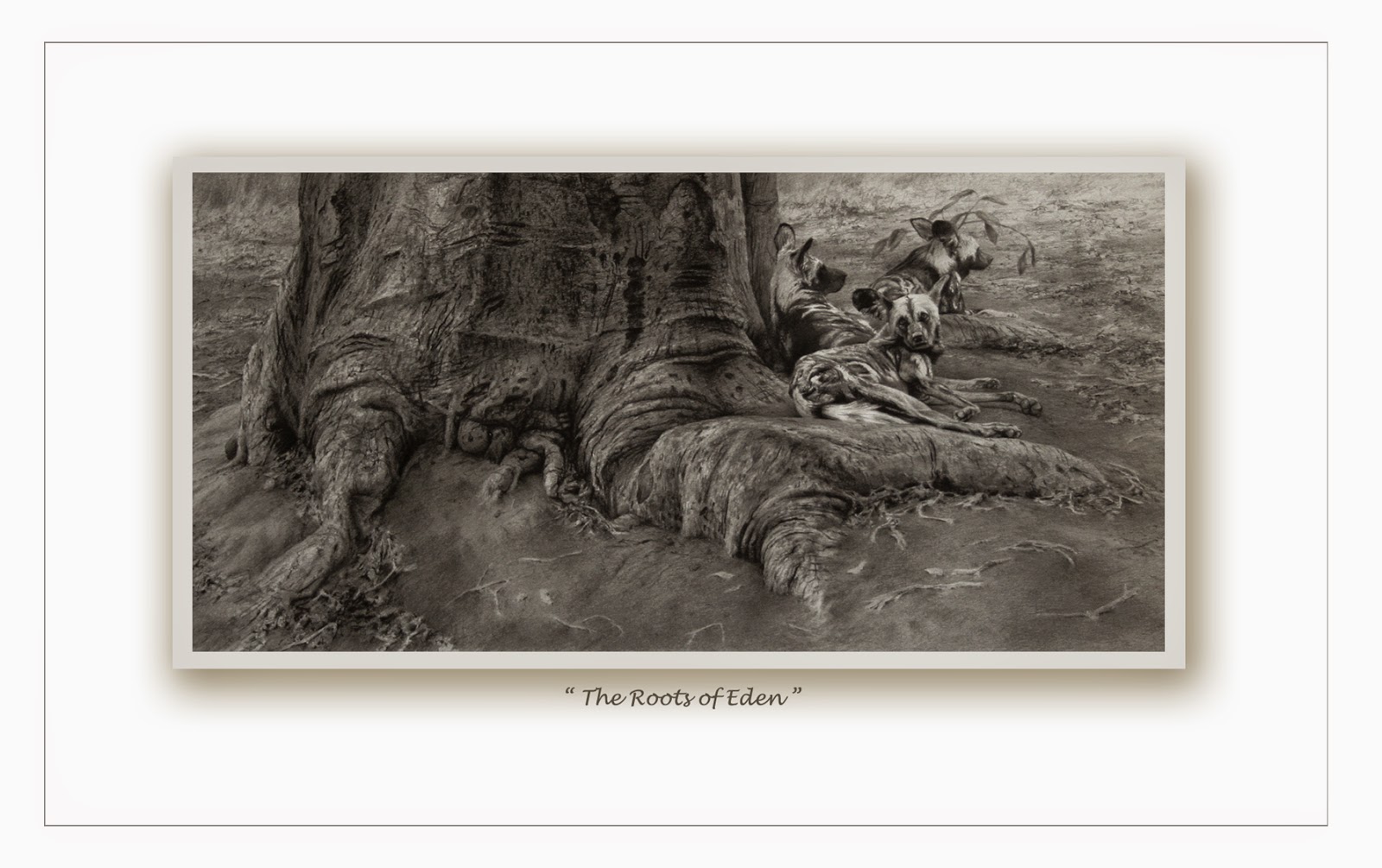 Beginning to tighten up in many areas now as this piece is coming down to the home stretch -  darkening shadows and crevices, 'smoothing' out the soil, greying down the tree texture to unify it more, and noodling smaller details. 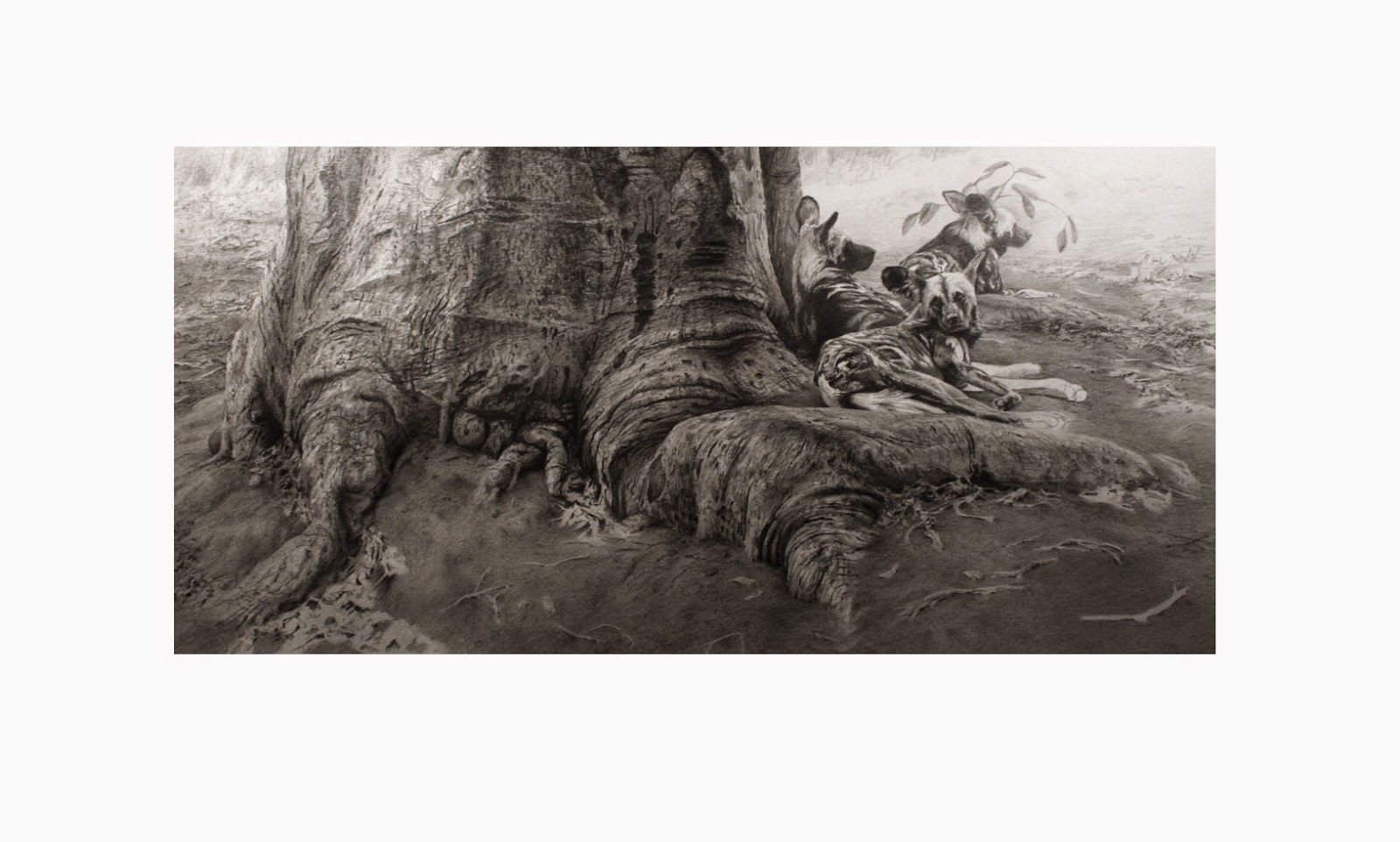 As studio time comes to an end this afternoon, here is where I'm leaving off for today. 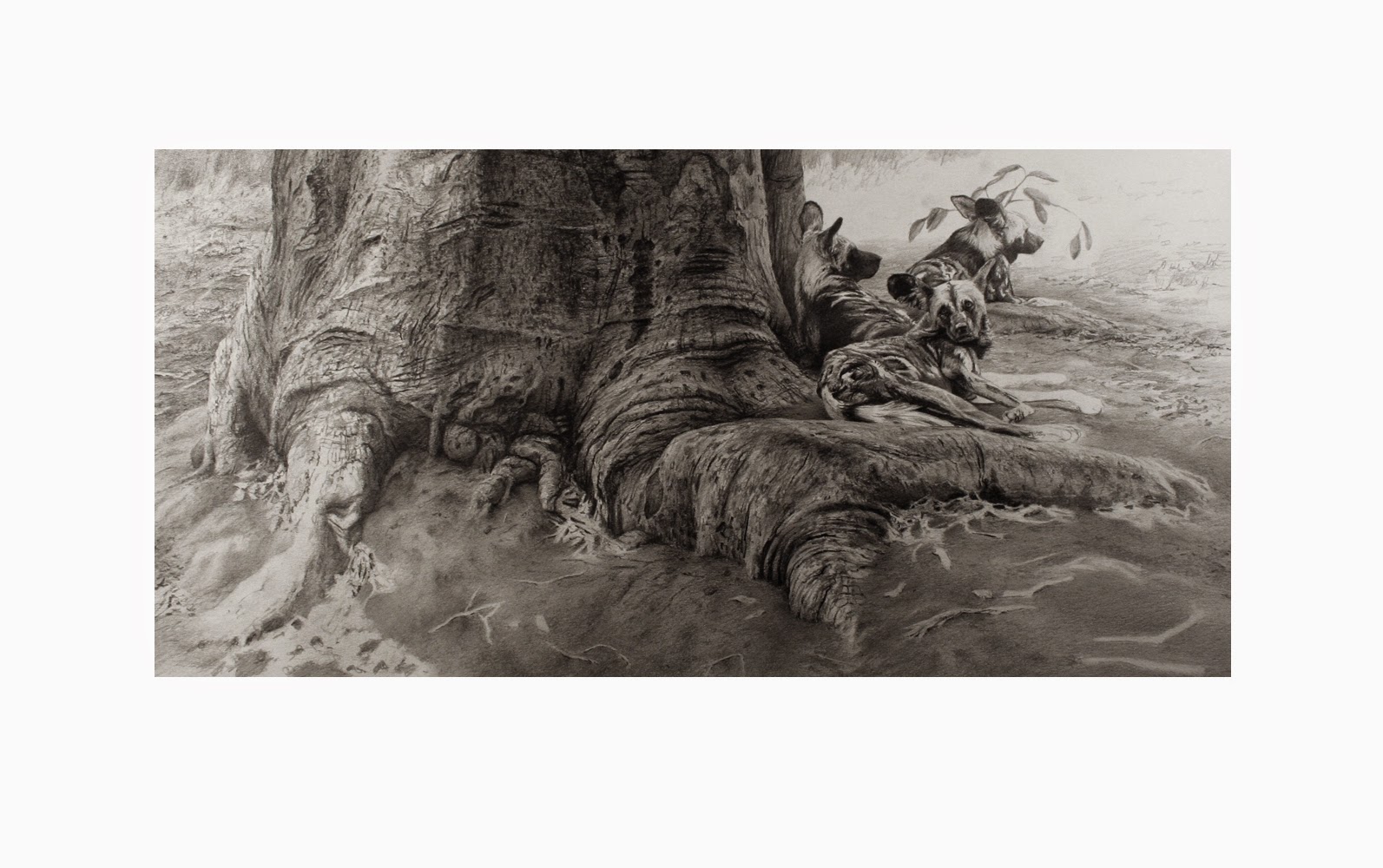 Before work begins today, here is a current update on this piece. 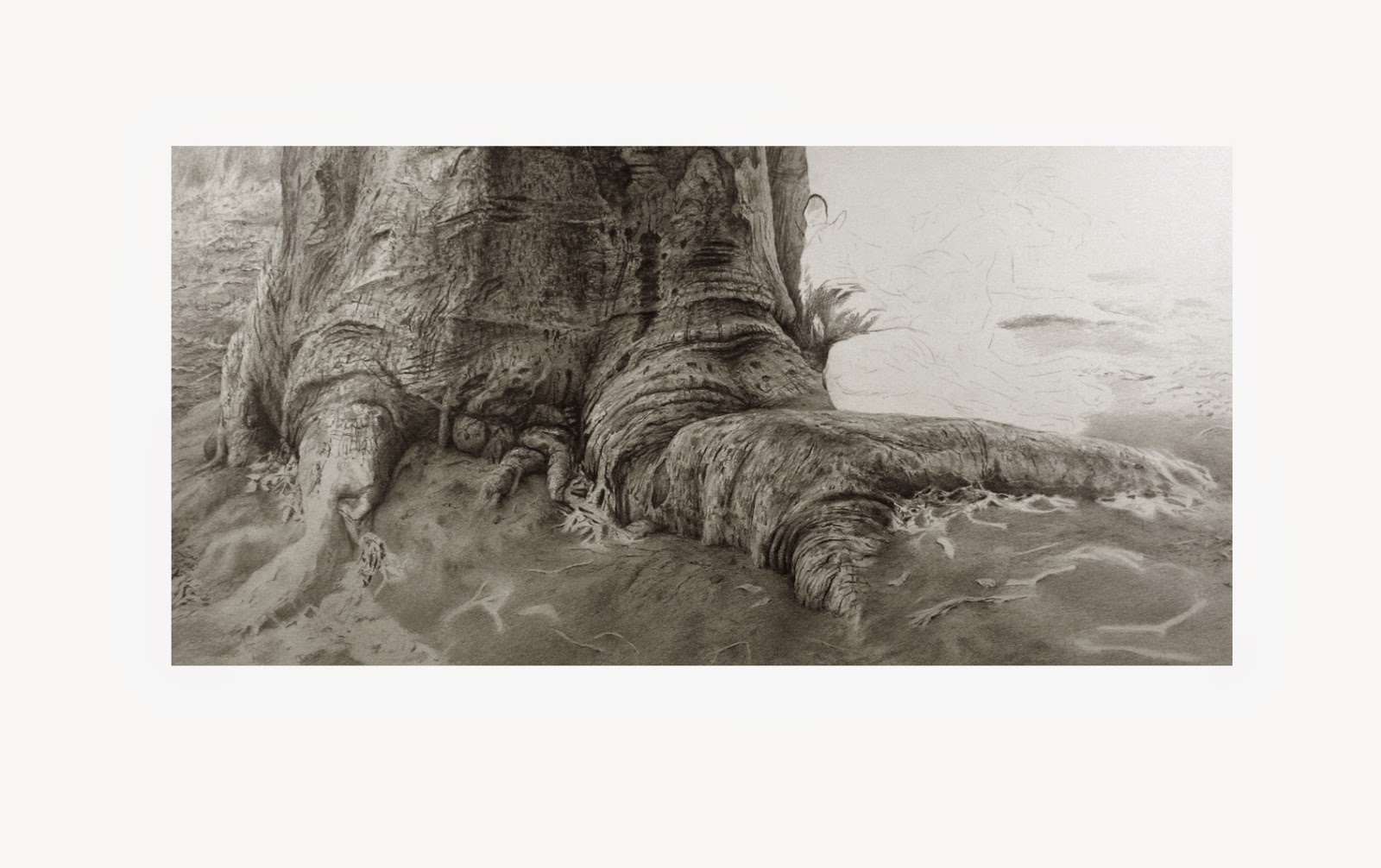 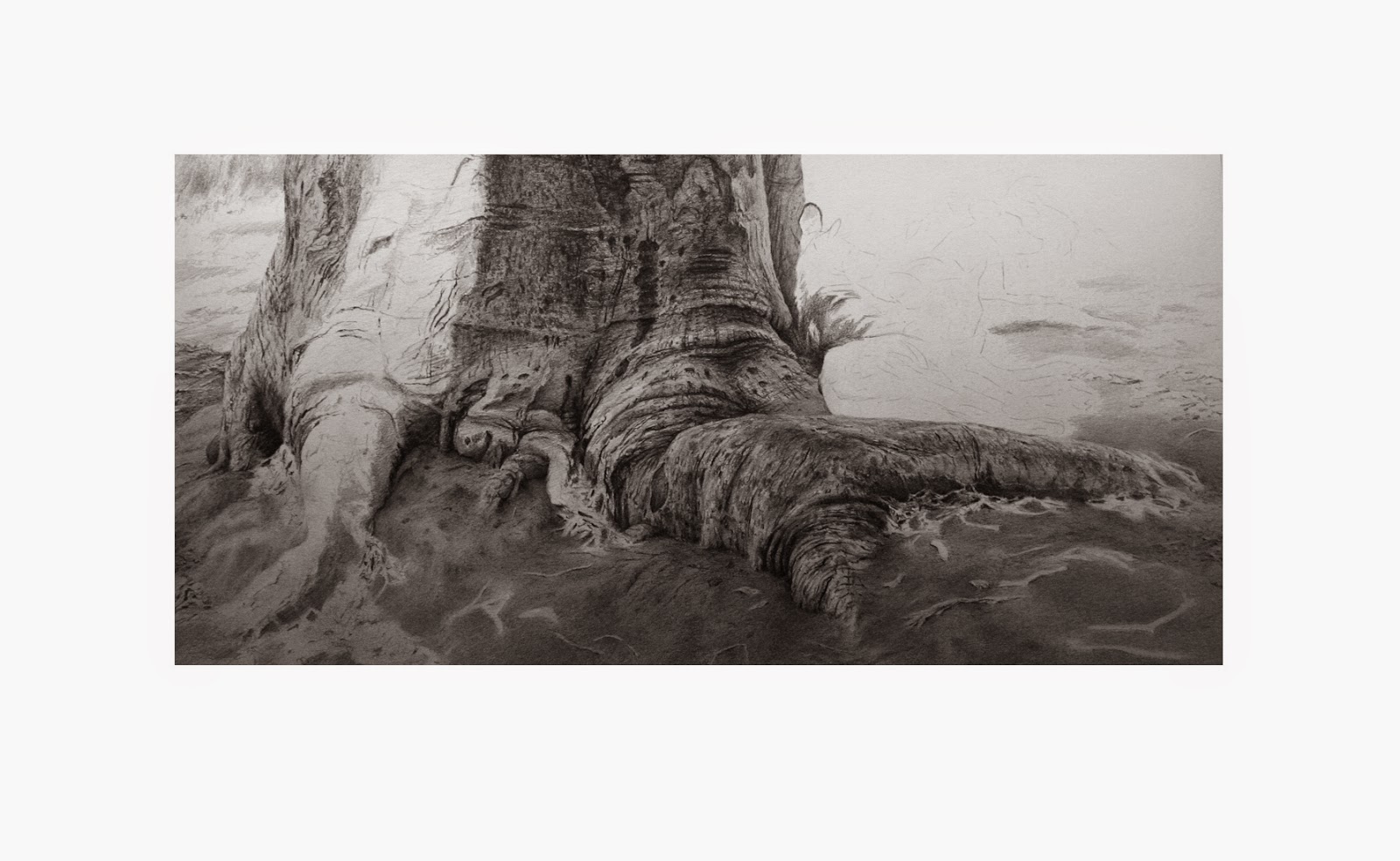 Posted by Terry Miller at 3:52 PM No comments:

Here is part of the progress on this new work as of this afternoon's studio time. More layers of graphite applied to begin to 'flesh out' the landscape. 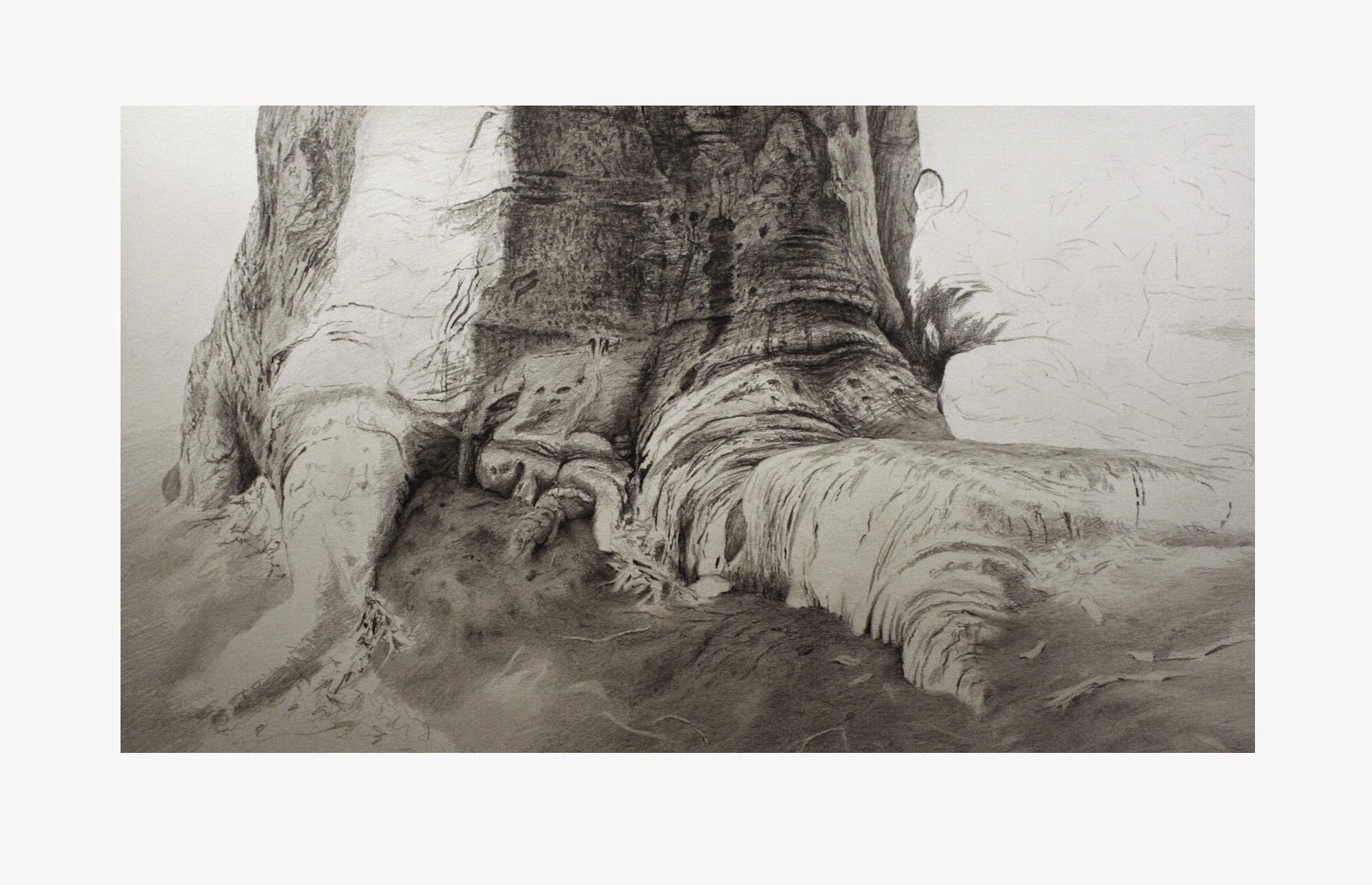 One of the most challenging and laborious textures that confronts me and the way I work with graphite, is a large area of a soft, even tone of mid value grey as in the piece currently on the drawing board with its large areas of dried, sun baked earth. It's a challenge but it's also fun to juxtapose that rather smooth texture up against a completely different texture, such as the undulation and fissured, crinkly surface of a African baobab tree. The way I go about accomplishing that subtle even toned grey is, as I have talked about many times before, to layer various grades of graphite through cross hatching and little circular motions. Since I work on a slightly textured Bristol board, I tend to just graze the surface of the 'paper' with soft strokes of the pencil tip and let the graphite adhere to the upper surface of the texture on the first few passes and crossing hatches. As I progress with layering, the graphite tends to fill in the gaps as I go back and forth, horizontally across the paper and then at an angle and then vertically with some small circular motions thrown in for good measure. The result is a relatively even base tone that I can then go over and begin to flesh out with dimensional additions by scratching in dark areas to give depth. 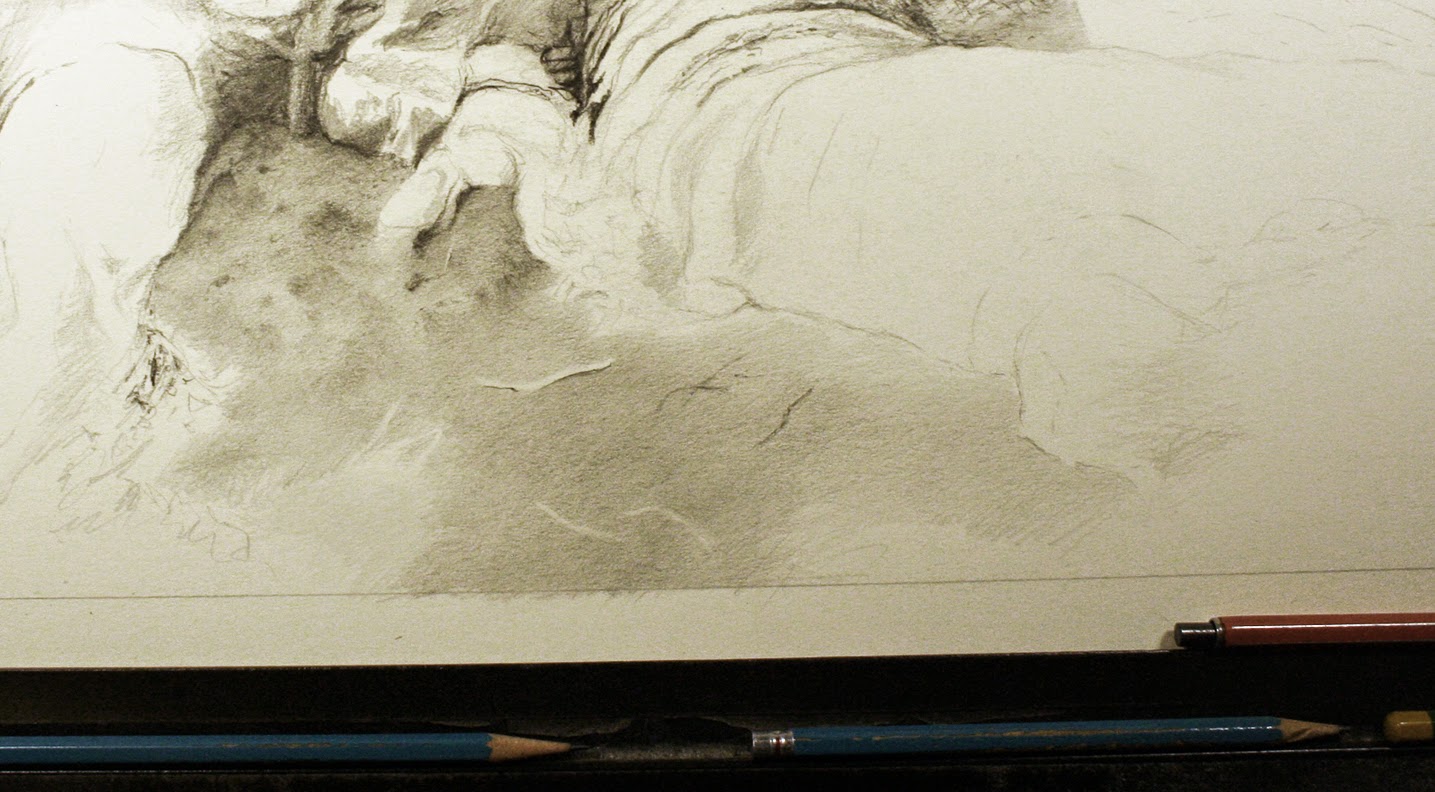 In the shot below, you will see the five basic pencils that I have been using so far to achieve that texture - from left to right 5H, 2H (in the red lead holder), 3H (in another lead holder), 8H and 6H. In no particular order, each graphite grey value is softly run across the paper and another, either harder or softer grade of graphite is layered over that one and so on and so forth, till I get a desired tonal value. You'll note also that several of the pencil points have been blunted so I have both a flat surface that gives a larger stroke, and by turning that same point slightly so that the sharper side of the tip is made use of, the line becomes narrower and a bit darker as it is applied. I keep going back and forth, turning that sort of pencil point as I work with that particular pencil to vary the value that ultimately is formed once an area is covered with that layer. This is all 'base work' right now to establish an under tone that I will, eventually, add other details to to give more depth and nuance. 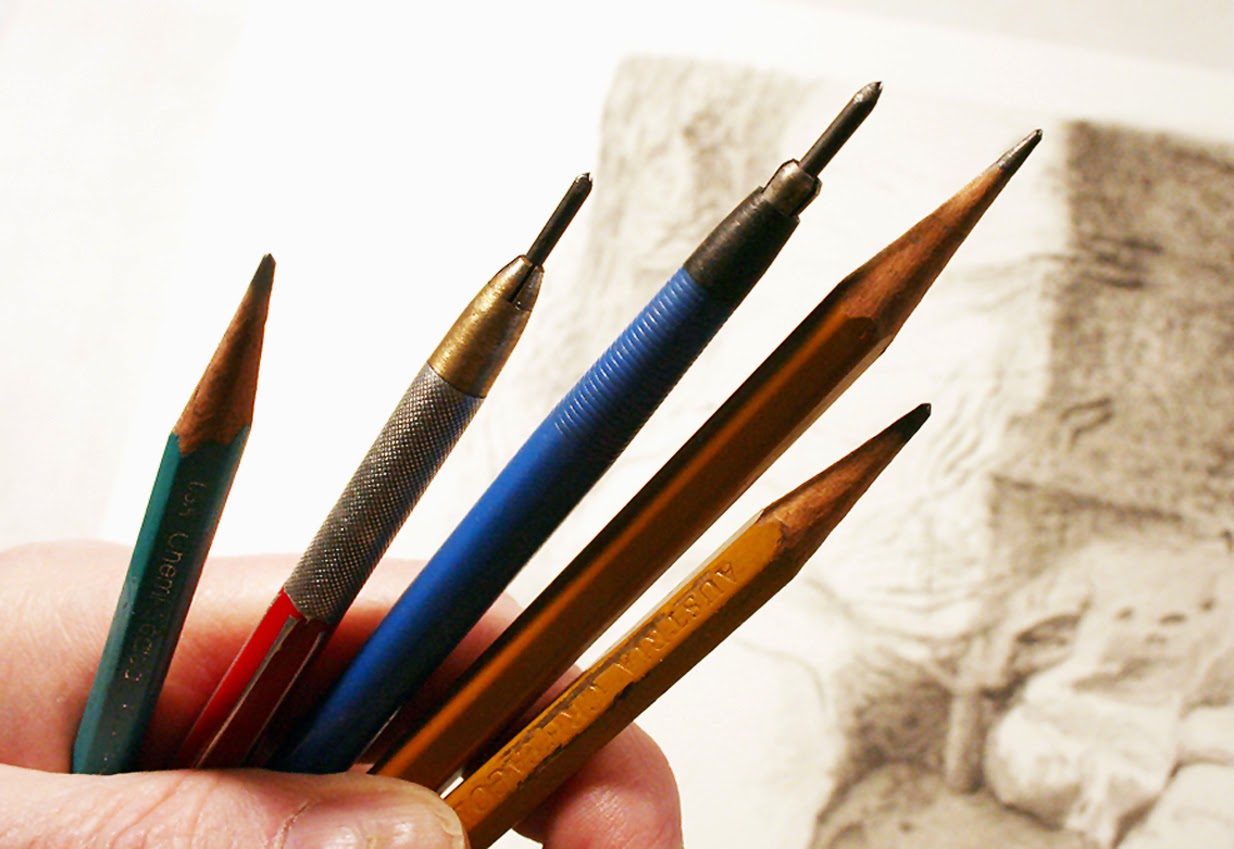 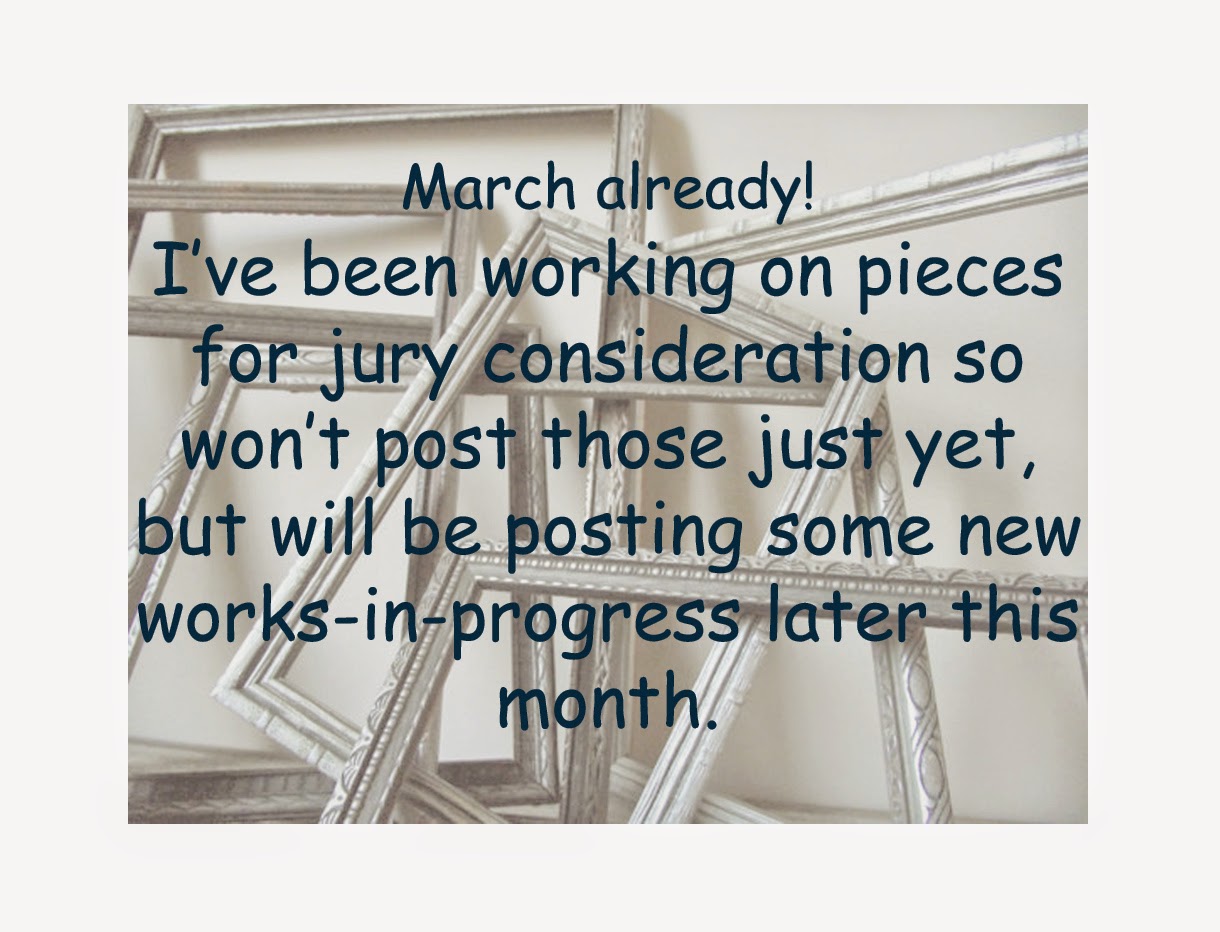 Posted by Terry Miller at 4:34 PM No comments: