No, not the well known card game but perhaps, a unique subject for a work of art?

Let me begin this essay by backing up a bit. About a month ago I purchased a copy of Irving Stone's wonderful fictionalized biography of Camille Pissarro, Depths of Glory and have been reading it, a couple chapters a night since mid December. I've always admired Pissarro's art and fascinated by the times in which he was painting so I was quite ready to read all about his life and his compatriots in the Impressionist cadre. As with most Irving Stone works, his research and inclusion of colorful details in the story line have helped to create, for me at bedtime each evening, the feeling of being immersed in the world that Pissarro and his fellow artists inhabited during the latter half of the 19th Century.

Stone's occasional mention of a particular painting in Pissarro's output, the relating of that particular work to a particular situation or event in Pissarro's life, and the melding and blending of the connections formed with his fellows, have all motivated me to seek out images on line of those certain named works of art. After viewing and  having a good visual recollection of those works, it's further enhanced my immersion in this wonderful read. In the process of looking up particular works, not only did I come across this website with a host of Pissarro's works . . .  all, according to its posted remarks on the site (though I have noted quite a few duplications) . . .  but often have been led to other interesting links which detailed any number of works of the other artist friends and comrades that Pissarro spent his days painting with.

As I have dug further and further, I've discovered new-to-me works of many of the Impressionist painters whose other works I've always been more familiar with, it is after all my favorite period in the history of art,  and in other instances, artists whose name and work I had no former knowledge of. In many of those paintings, I noted bridges had become predominant subjects and, having spent much time ten and eleven years ago amassing a body of reference material of bridges and bridge structure in preparation for completing the series of works that ultimately made up my solo exhibition, Unknown Bridges with the Woodson Art Museum in the summer of 2008, I was quite pleased to see many works of that host of artists whose work I had such respect and admiration for, making use of the same subject that has so intrigued me.

Also, over the Holidays, I have been spending some time reworking my reference files and images, copying them from discs which they've been stored on for some years, to an external hard drive so I would have everything in one place for ease of finding resource material for new drawings. In the course of doing all that work, I was happy to revisit several hundred photos from my own forays into the field to study and photograph bridges, reminding myself of many ideas that I had for works at that time which I never got around to doing for the exhibition.

Now, more than six years after Unknown Bridges came and went, I am once again finding great inspiration looking through all that material that I never even touched and recalling the fun of exploring and seeking out old and unsung bridges both locally and far afield. I am not only thinking about approaching that subject matter once again . . . bridges . . . but as a result of reading Stone's book have began to think about how that subject matter had been approached and portrayed by many artists in the past.

Of course I've always been acquainted with Monet and his wonderful and atmospheric series of paintings of the bridges across the Thames in London, but the more I thought about it, other images of rather well known paintings with bridges as their major subject or theme have began to come into clarity and, as a result, I've followed up on those thoughts by spending a bit of time searching on line for images of those paintings that have begun to float around in my head.

In addition to Monet's iconic London bridge paintings, one of which is seen below in figure 3, another one that came rather quickly to mind was Whistler's Nocturne in Blue and Gold (Old Battersea Bridge), figure 1, as well as in figure 2, Van Gogh's Langlois Bridge at Arles with Women Washing. The images of those rather famous paintings were quite clear in my mind when I began my Internet searching, but I quickly wanted to explore more and find other, maybe not so familiar works where bridges took center stage. The die was cast and I knew I was in for an interesting few hours of wandering the Internet in my quest. 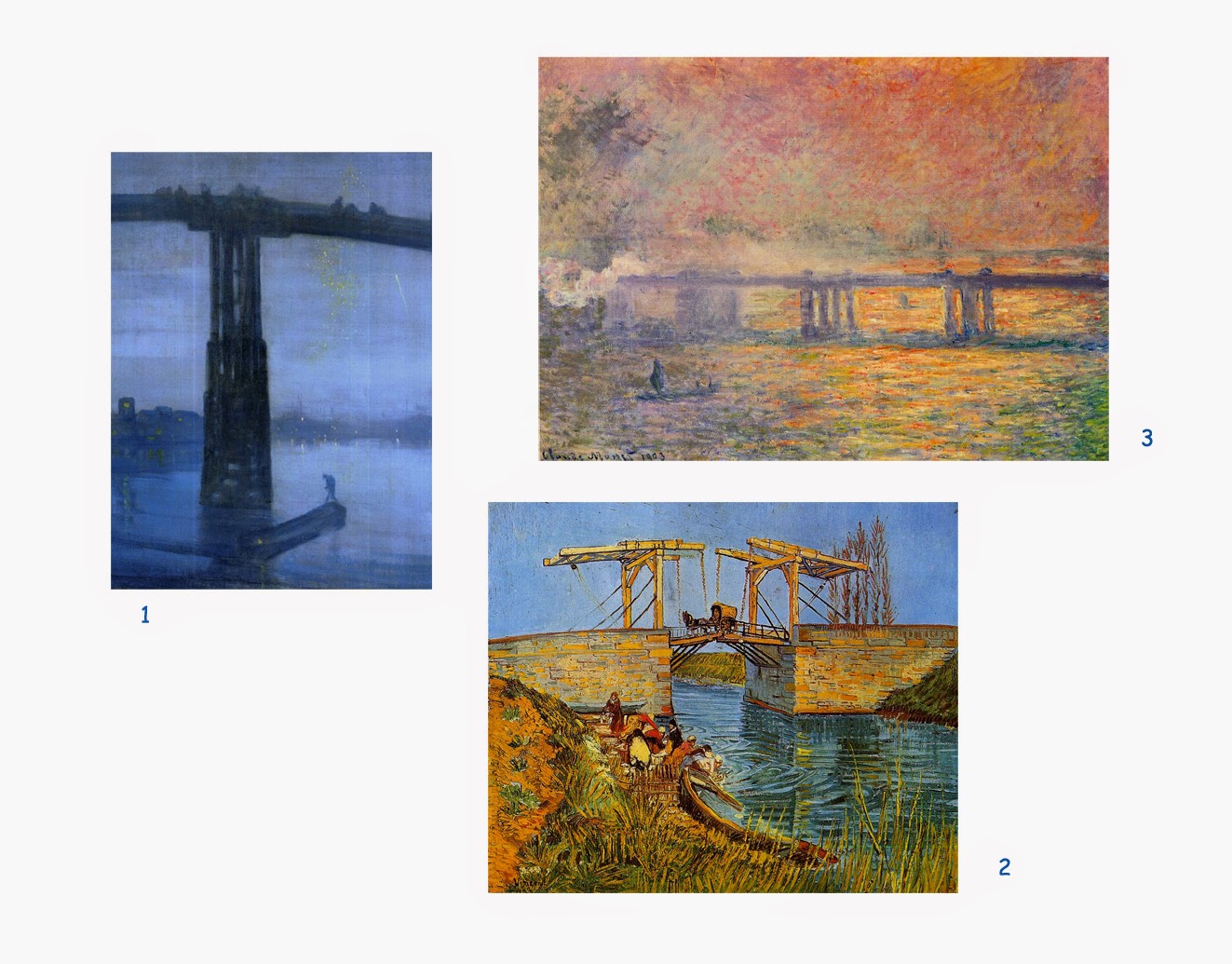 And so began a search that ultimately took place over the course of the week between Christmas and New Years (and probably will continue on from time to time as time allows), a search that led to discoveries of wonderful works that I had not known. What follows then, is a scratch at the mountain of wonderful interpretations and compositional ideas, represented in paintings from the last several hundred years, that really have spoken to me and will most certainly act as inspiration when I once again consider the possibilities of those hundreds of images of bridges and bridge structure that have been waiting in my reference files for me to incorporate into new and future works. 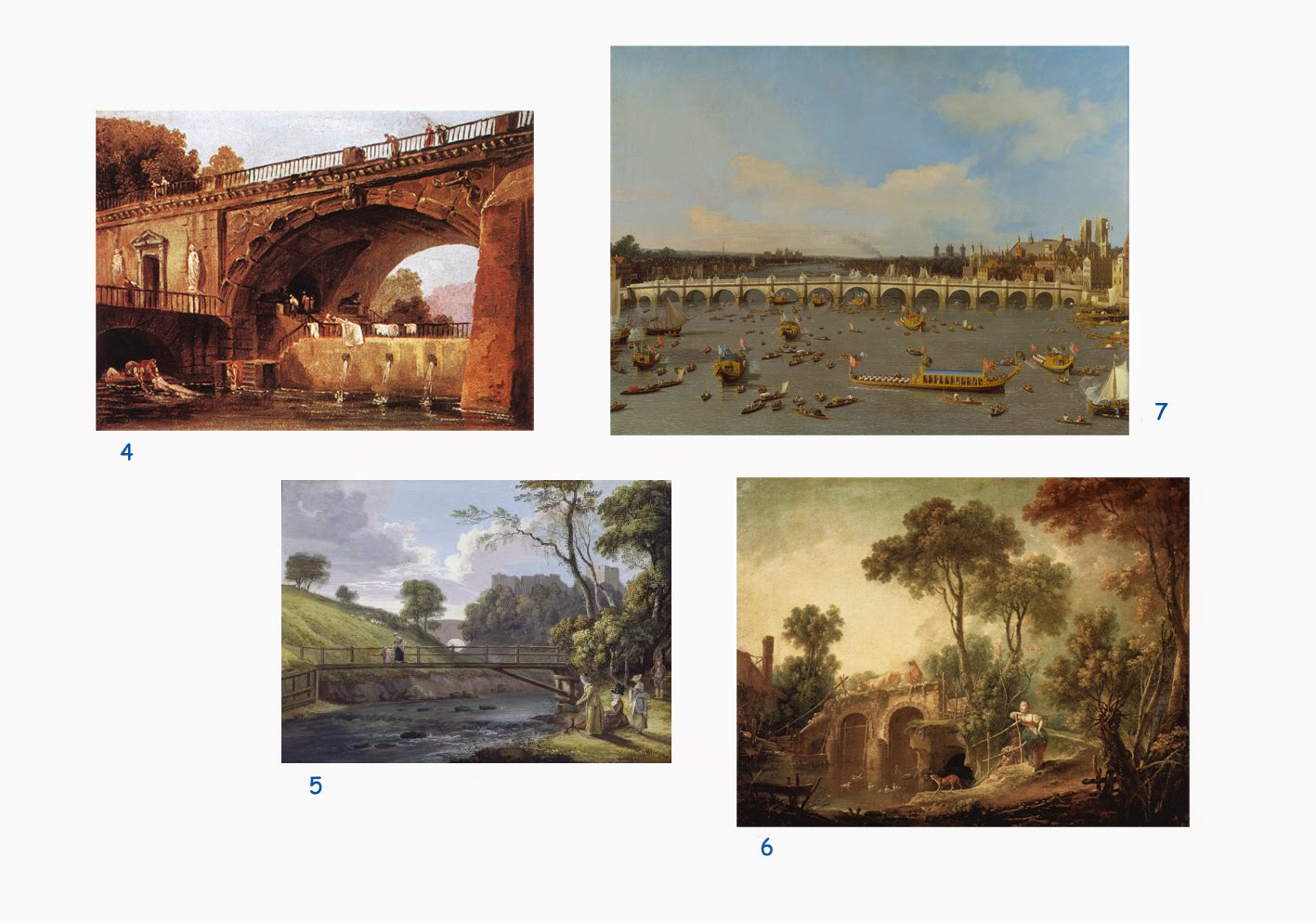 Reaching back into the 18th Century, in this first set of four images above, Frenchman Hubert Robert (figure 4) in his painting Washerwomen Below a Bridge, repeats the theme Van Gogh touched upon by zeroing in on a rather common daily ritual, but by using the bridge and the interesting angle of view as a foil for the rather mundane activity, Robert's painting, as does Van Gogh's, takes on more interest giving each artist broader compositional opportunities.

Englishman Paul Sandby, who along with his brother Thomas became one of the founding members of the Royal Academy, painted Roslin Castle, Midlothian (figure 5) around the same time as Robert. It's a pretty straight forward portrait of a bridge in a pleasant landscape but I like his placement of the figures in the lower right which move the eye toward that angled support of the bridge which then helps to move the eye up and across to the distant circular opening beneath the arched bridge which places the eye upon the treed hillside and ultimately the discovery of the castle itself. For me, as an artist, it is fun to see how another artist several hundred years ago, chose to develop his composition in such a way as to move the viewer into and through the entire work. As I've said many times before, establishing a good flow in a composition and placing all the elements in their correct and appropriate place to serve that movement, is what drives my creative juices.

In figure 6, The Bridge by French Rococo painter, Francois Boucher, he does credit to what he was best  known for . . . idyllic pastoral or allegoric scenes. As Sandby did, Boucher brings the eye into the work with the prominent figure in the approximate lower right, her curved resting arm mimics the angle of the approach path to the bridge which helps to lead the eye up to the figure and cow upon the bridge and back into the distant landscape. Though there is a great deal going on all around it, the bridge does hold its own as the centerpiece of the composition.

In the fourth (figure 7) painting in the above grouping, Giovanni Antonio Canal (Canaletto!) in his earliest of these four paintings shows Westminster Bridge as it appeared in the mid 18th Century. It is another straight forward portrait of a bridge enhanced by Canaletto's understanding of and great use of perspective and high detail. 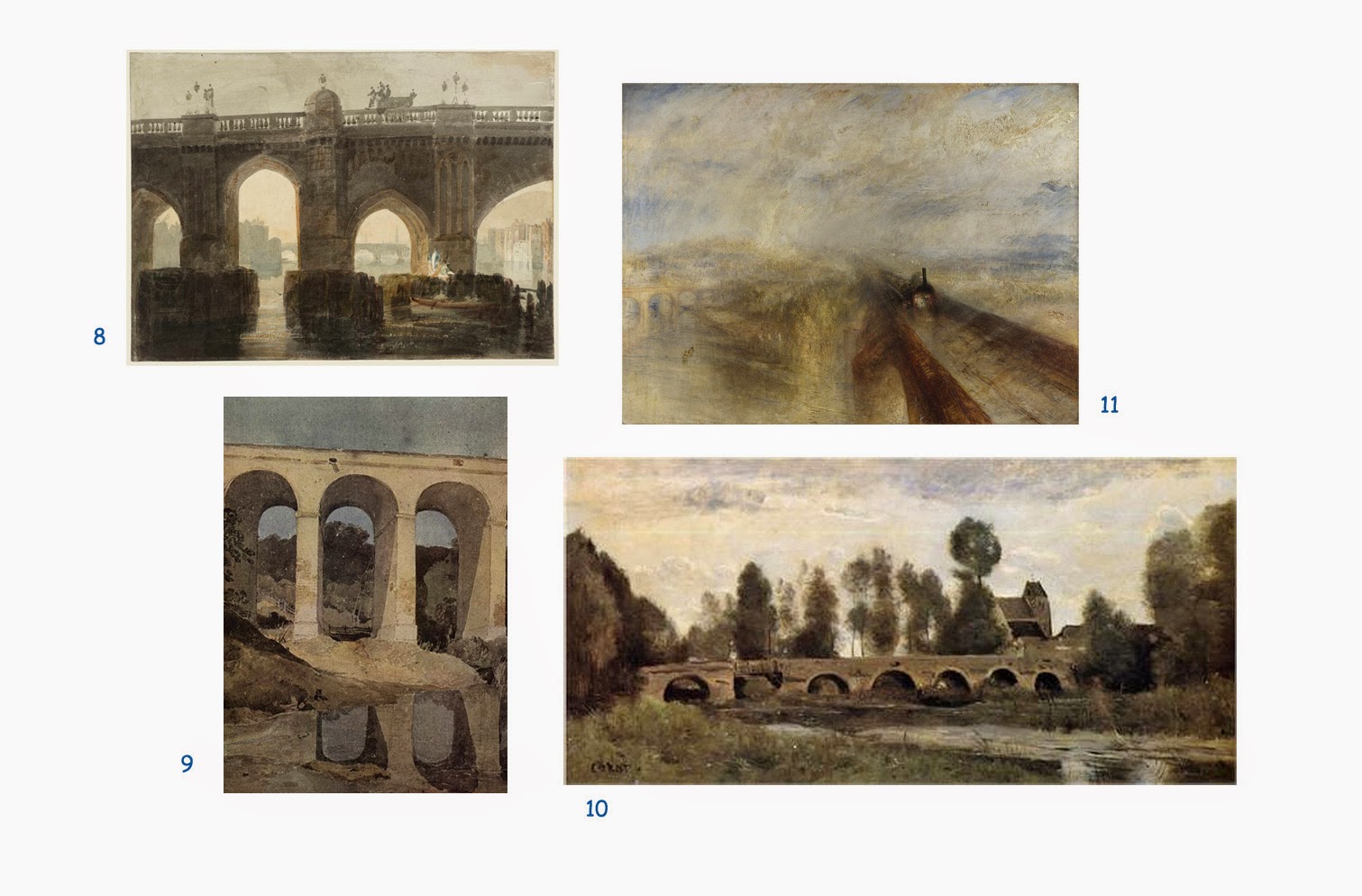 Moving forward in time, this next group (above) of four works represent paintings from the beginning to middle of the 19th Century. Figures 8 and 11 show two fine examples of Britain's J M W Turner focusing on bridges as subject matter, one early on in his career and the other when his work became more atmospheric and "abstracted". Figure 8 shows Old London Bridge brushed toward the end of the 1790s, another straight forward portrait of the bridge with a bit of added movement in the boat and passing carriage above. I am reminded of the compositional elements of the Sandby work mentioned above, in that Turner has positioned the boat in a similar placement as Sandby did with his lower right corner figures; the light shining upon the front end of Turner's boat moves the eye up and through the arch of the foreground bridge to the curves and arch pattern of the distant bridge and thus helps to move the viewer's eye back and into the distant landscape.

In his more famous and recognizable Rain, Steam and Speed, painted nearly 50 years later (figure 11), Turner's emphasis on the strong colors of the bridge pull the eye into the work, the remaining elements of which both disappear and materialize out of the wispy brush work. The two bridges are really the only elements of the overall composition that are truly recognizable.

The remaining two works, figures 9 and 10, both have quite similar focus on the arched structure of each bridge depicted. British artists, John Sell Cotman in Chirk Aqueduct (figure 9) painted at the outset of the 19th Century, places his bridge front and center with its reflection adding to the impact that the structure itself commands; his landscape fades into the distance and the painting is all about the bridge.

Jean-Baptiste-Camille Corot's The Bridge at Grez sur Loing (figure 10) has a similar impact to that of Cotman, yet at the same time Corot's bridge is much more a part of the overall landscape. It is a strong element of the overall design for sure, but it is only one of the several major elements of the composition that all blend and meld together to make a cohesive unit.

*The next installment will be posted tomorrow*
Posted by Terry Miller at 2:28 PM