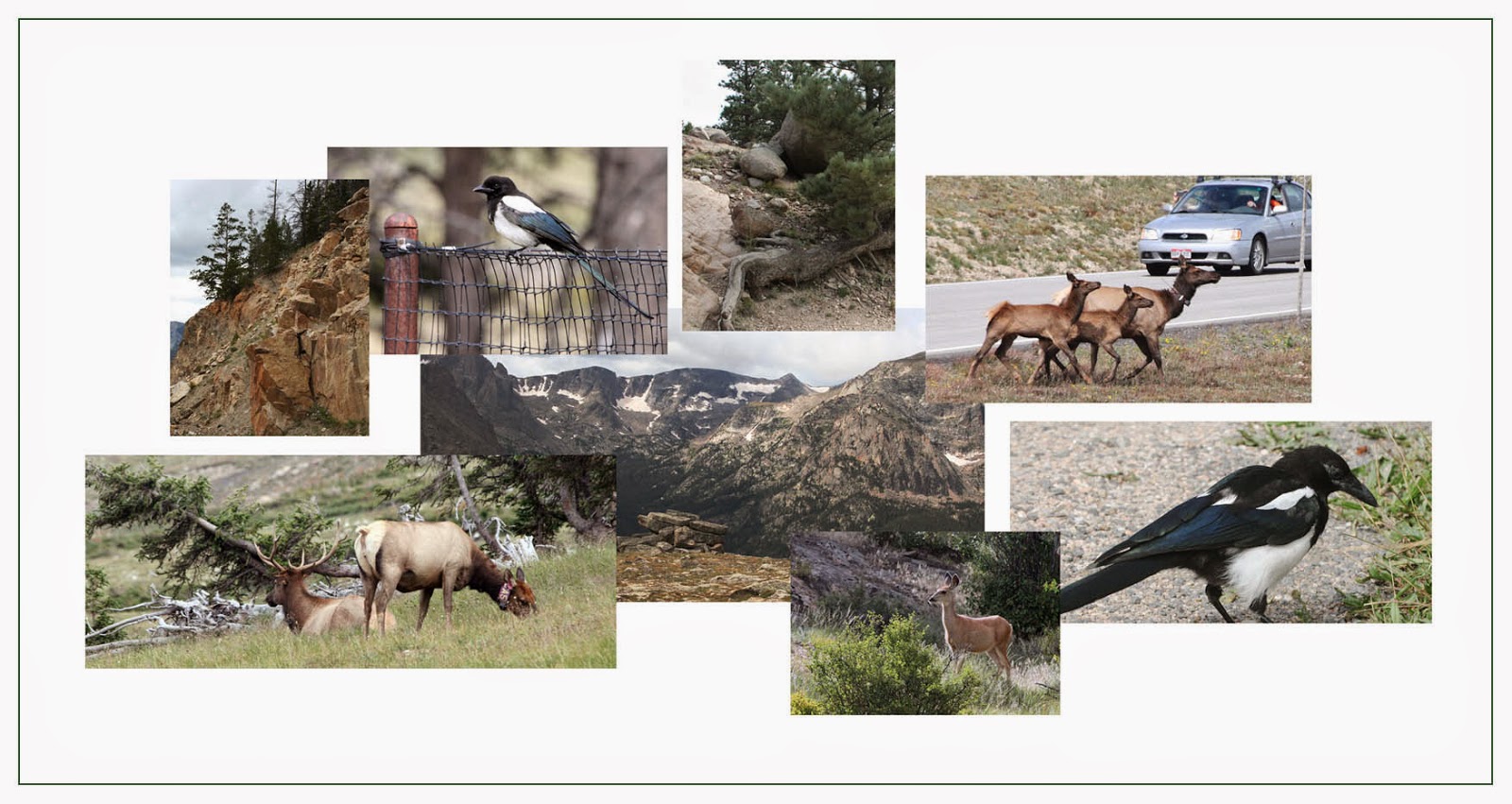 A week ago today, I was, as they say, winging my way toward Denver and the opening weekend events of this year's Society of Animal Artists members' annual exhibition at the beautiful Wildlife Experience in Parker, just south of Denver. 68 of the over 120 exhibiting artists were in attendance for the two days of receptions, programs, presentations and camaraderie. Before it all began, last Thursday was a day for reference gathering as I spent a full day in Rocky Mountain National Park with several fellow SAA artist members as we headed up and over the Continental Divide from Estes Park to Grand Lake and back. Photos abounded as we were fortunate to see many of the park's resident wildlife, and especially the magpies (which to me were worth the trip alone). I have already foreseen many new drawings that will come from this material and can't wait to dig in. As I also sit on the board of directors of the SAA, we had our second of two yearly meetings this past Sunday and made many important decisions about the direction the SAA will move in over the next few years. I'm quite proud to be a part of that decision making on behalf of the entire membership as I know the Board is definitely moving the Society along exciting new paths. The next new members jury will take place next spring at our April meeting so if you are interested in possibly becoming a member, check out the Society's site for information . . . Society of Animal Artists.
Posted by Terry Miller at 4:23 PM No comments: 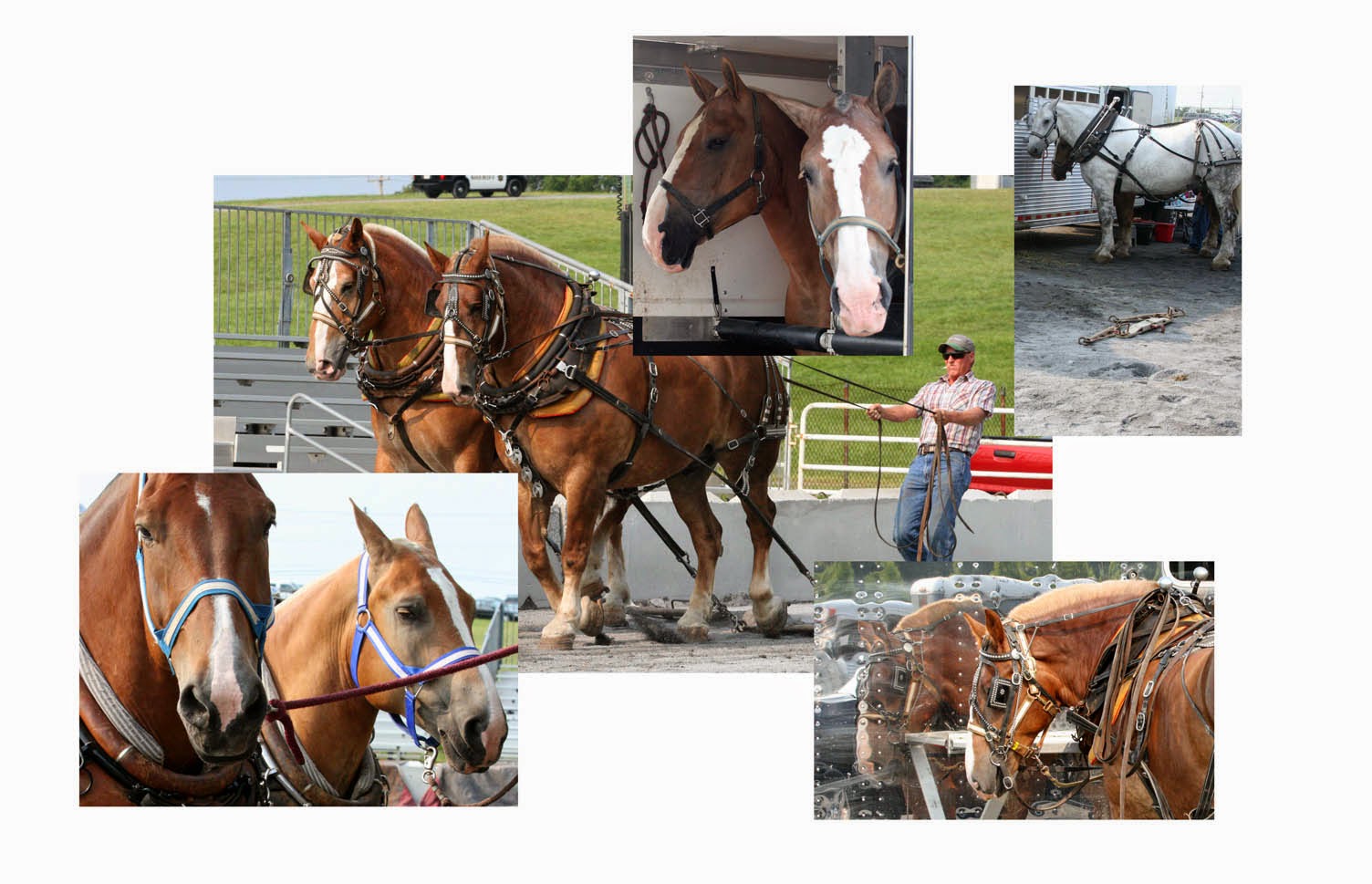 Closing out the first week in August . . . traditionally the week for the Howard County Fair here in Maryland . . . I spent several days this week attending the various horse shows, ending up this morning at the annual Draft Horse Pulling Contest. What a fine bunch of horses. Got wonderful reference material all week long and expect to see some horse drawings coming off the drawing board over the next eight to ten months. Now, where to start . . . ?
Posted by Terry Miller at 4:54 PM No comments: 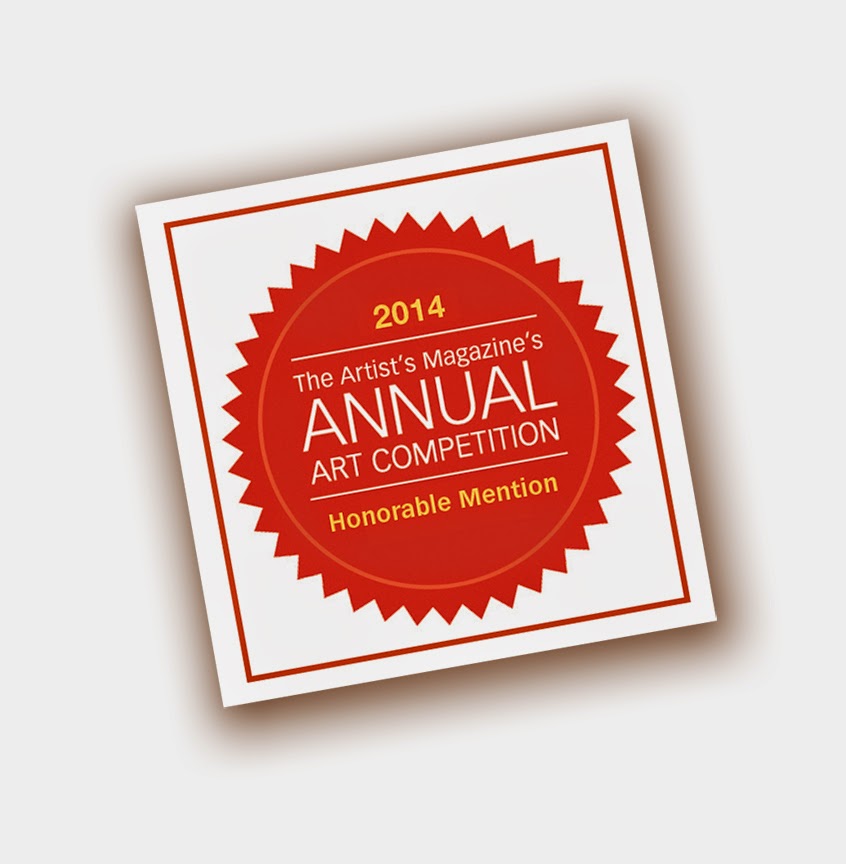 I am, pardon the pun . . . more than just a little bit honored to announce . . . for the second year in a row, a work of mine has been honored by being noted as an Honorable Mention in the animal category of this year's Artist's Magazine Annual Art Competition. I won't post the image of the work selected till the magazine comes out in December announcing all the Winners but am pleased to make this notation today. You can check out all the competitions and other unique and informative offerings at The Artist's Magazine website and see if there is something you can submit to next time around. For now, I'm thrilled to have a work of mine singled out among thousands of entries.
Posted by Terry Miller at 2:20 PM No comments: 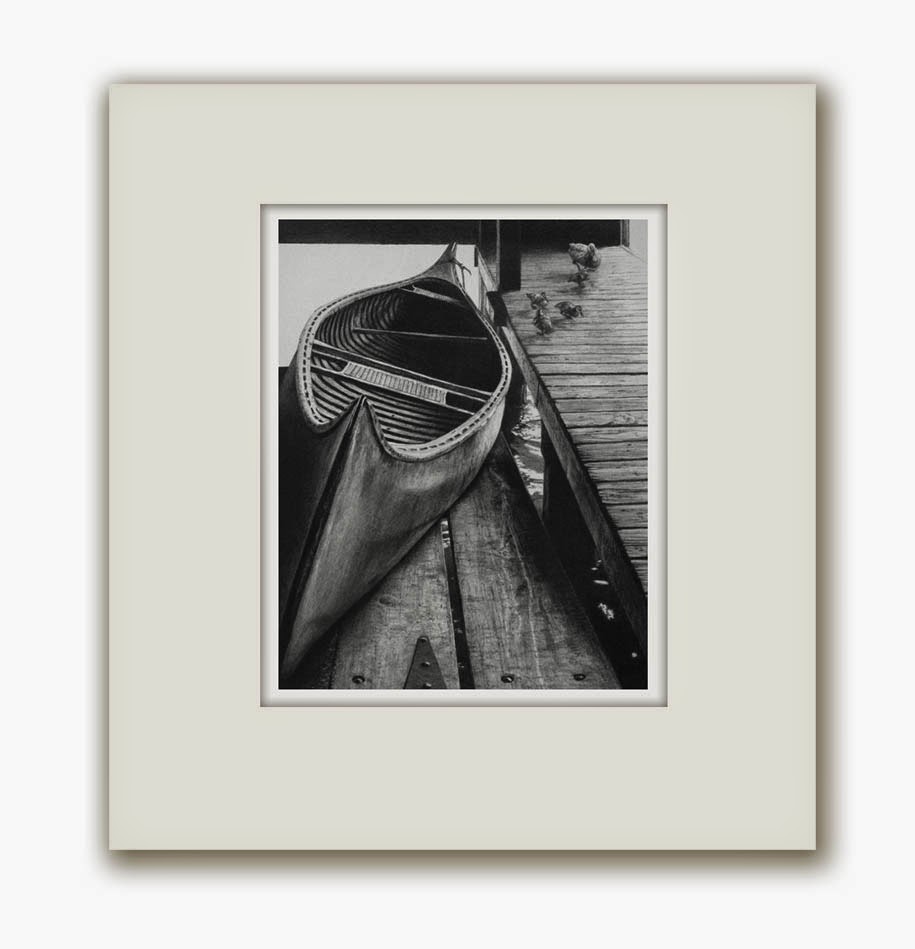 As hoped, this one finished up a short time ago, headed outside to be photographed and will shortly head to the work table for framing. The Boat House, image size a bit over 9" x a bit over 7". It will be sent out to the Howard/Mandville Gallery for their annual small works show which will take place in mid October.
Posted by Terry Miller at 4:30 PM No comments:

Closing in on this one. The hard stuff now . . . those ribs and webbed feet. 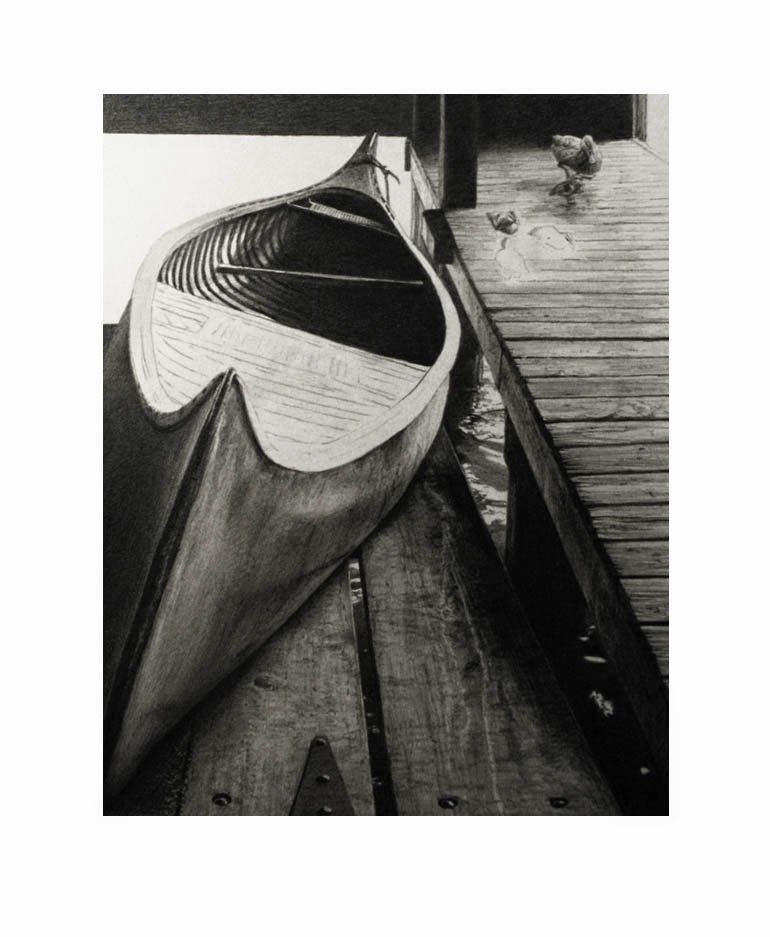 I have wanted to do this drawing . . . well, have wanted to work up this idea at any rate . . . for several years, maybe even six or seven. The reference was gathered one year during the opening weekend festivities at Birds in Art . . . at least the boat house material was noted there. The addition of the little web-footed creatures was left to be 'discovered' as time passed and as I kept returning to the great abstract qualities of the angles and light/shadow contrasts of the main idea and waiting for the right bit of movement and animal addition to make the idea into a composition that worked. Count ahead to about a year ago when I was lucky enough to photograph a mallard with her little brood at the National Arboretum in Washington DC and bingo . . . the two situations were made for each other. Sometimes an idea or a spark of an idea will sit and sit for years, as I return to it from time to time and try and figure out a way to use the material to make an interesting and appealing composition that not only will I want to work on, but one that may appeal to others as well as a finished work. That remains to be seen, once of course, the work is finished! I hope that will occur this weekend as I am on deadline for several other needed drawings at the moment and no time to waste. 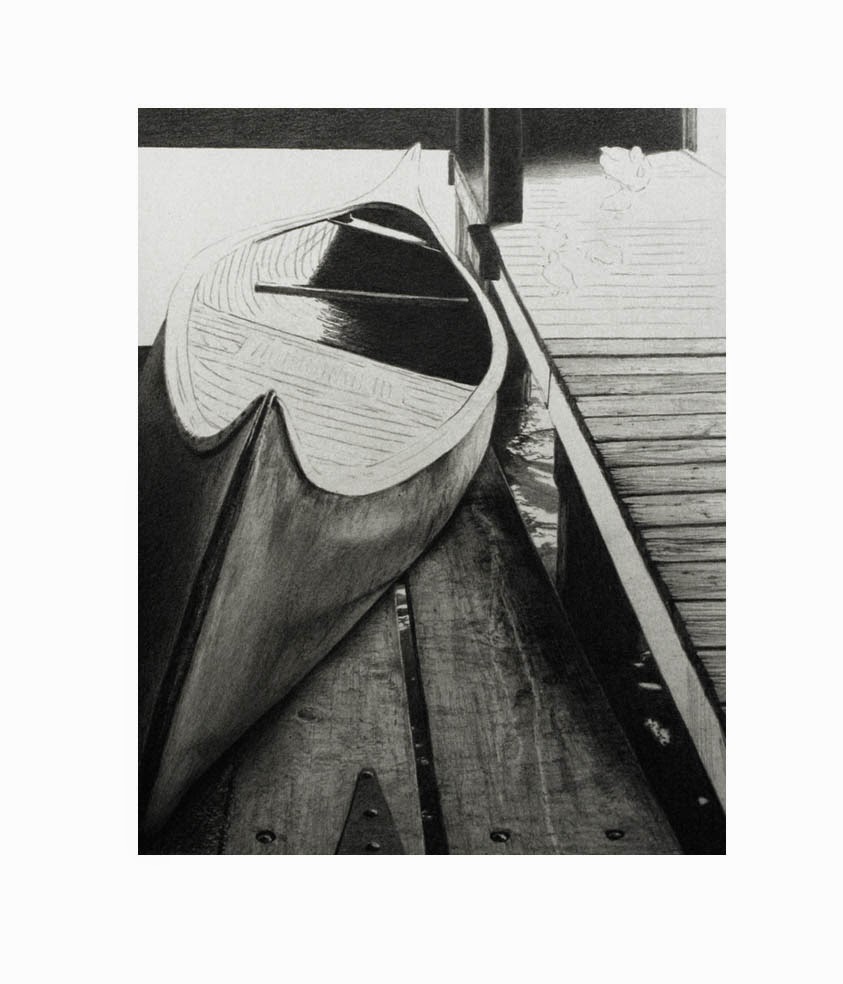 Posted by Terry Miller at 4:13 PM No comments: