More Pictures at an Exhibition and a few Discoveries

Continuing my exploration of late Impressionist and Post-Impressionist artists and moving on from Van Gogh and Gauguin, upon entering the next gallery I immediately recognized the unmistakable color palette of Paul Cezanne as I approached one of his iconic vistas of southern France, The Bay of Marseilles - Seen from L'Estaque. I've always admired Cezanne's earthy tones, the clays and soft oranges, tans and subtle greens that dominate his landscape works, often infused with rich sea and sky blues to add just a touch of cool. I like the simplification and paring down of his subjects, leaving in what is needed for the eye to distinguish what it is seeing, yet leaving out all that is not necessary to bring life and depth to his work. 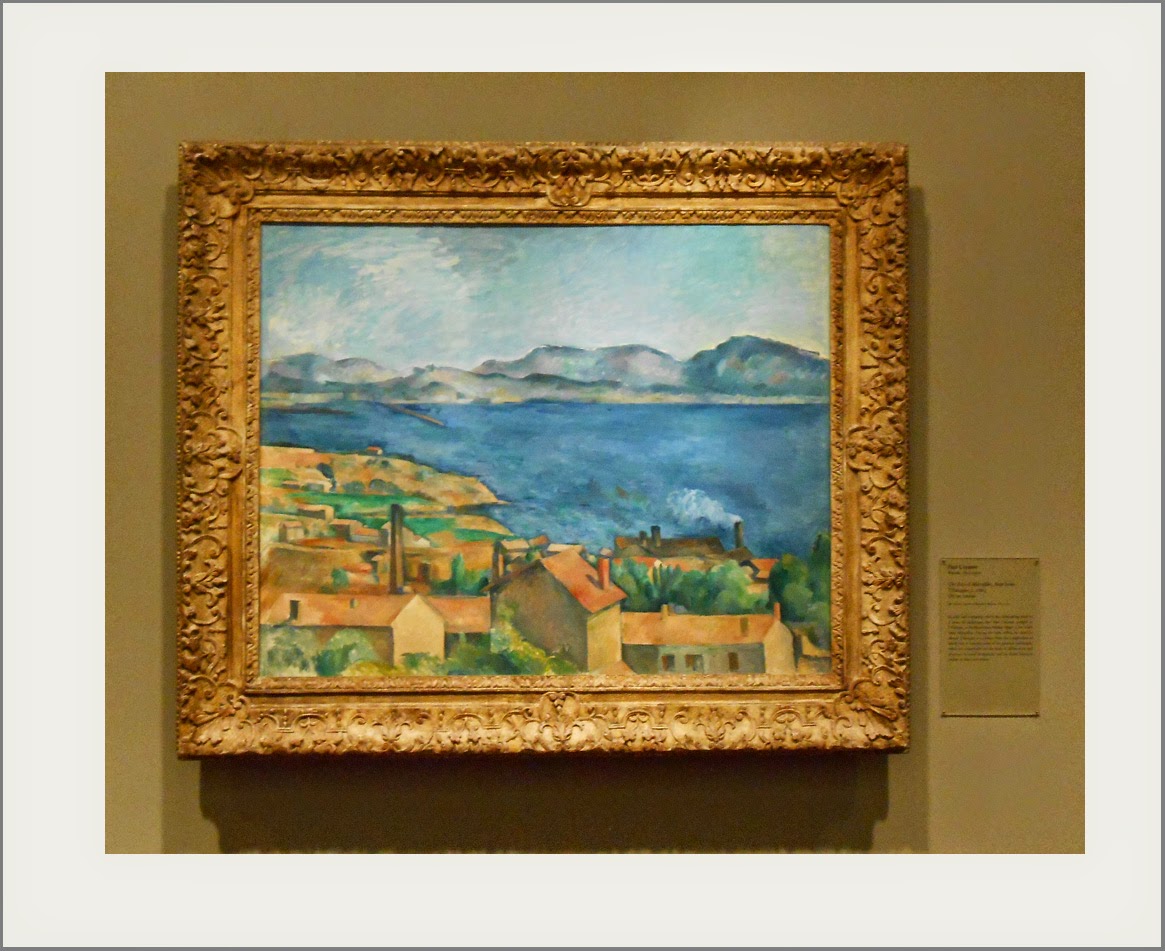 Also known for his wonderful still lifes, I was drawn across the gallery to another of his well known works, Still Life with Basket of Apples. I shot a close up, below, of the lower left corner of the work to zero in on his brush work and all those soft and hard edges. Again, simplification of his subjects - breaking them down to basic shapes and forms, defined by color, light and shadow - enable the viewer to perceive the three dimensionality in the work, yet also sense the more abstract aspects of the bold, slightly angular shapes that will yet come to dominate the Cubist Period that was just around the corner from when this work was painted. 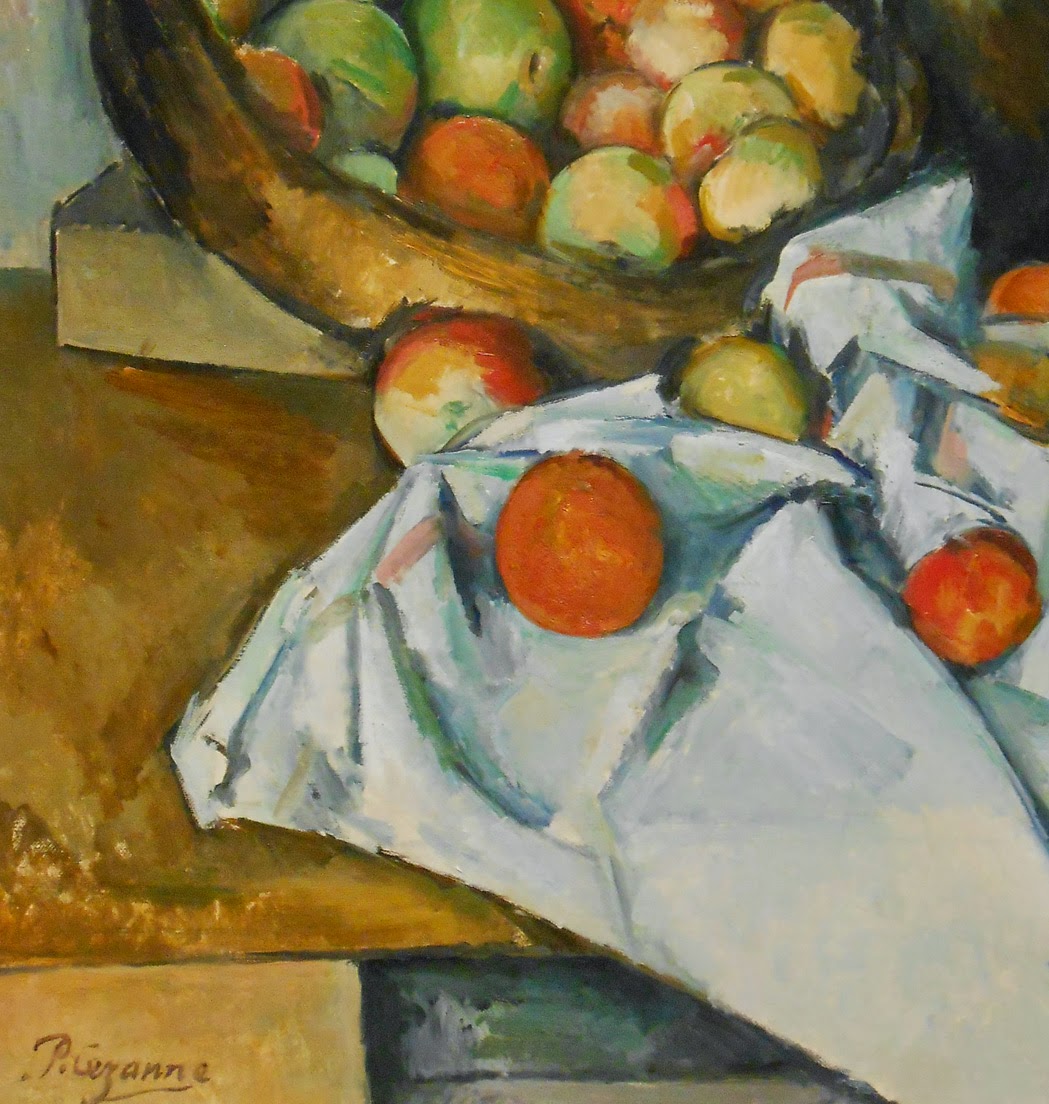 Another one of my favorite late or Post Impressionist painters, Camille Pissarro, was well represented in the collection with several figurative works as with the one below, Peasant Girl Drinking Her Coffee. Pissarro was known to have experimented with a Pointalist style brush work at times and this particular work showed me some of that dabbing and dotting and soft, hazy melding of dashes of color that so marked the work of Seurat, yet in a less staccato manner, allowing for more nuanced details to emerge from the overall feathery quality of the painting. 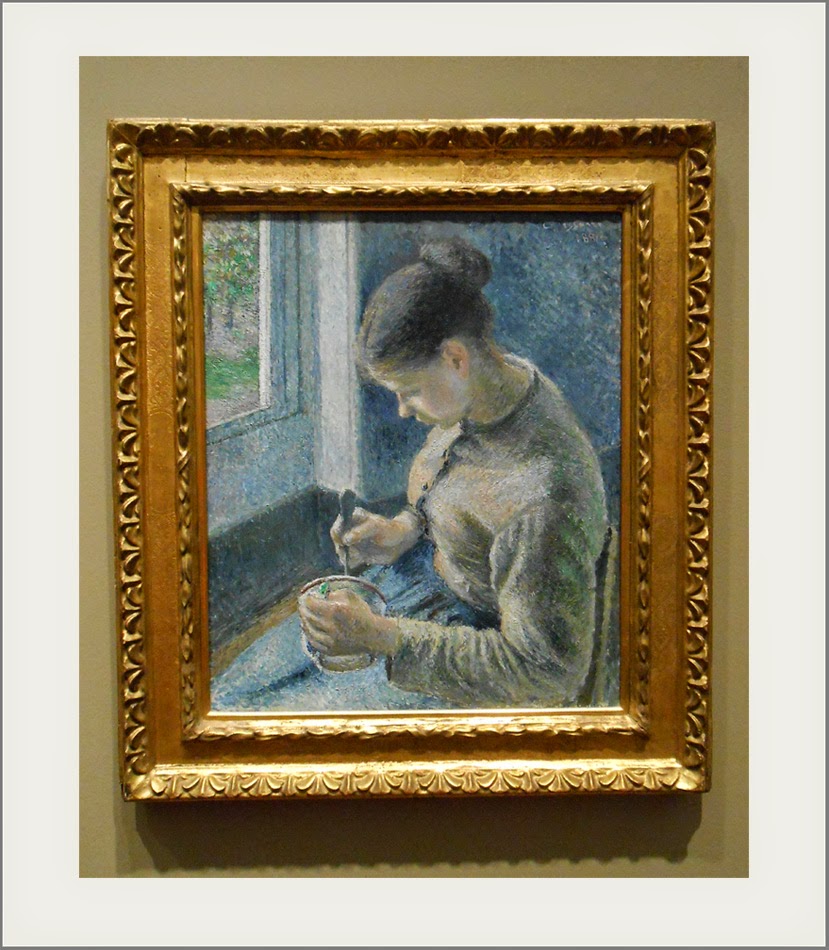 A closer inspection of a detail of another of Pissarro's figure works, Young Woman and Child at the Well, (seen in the first image below) again illustrates a more dashing brush approach in which his colors seem to float on the surface of the canvas and in the second photo, closer in still, you can really see the overlapping and overlayering of colors that defined the shapes of his subjects and their surroundings. As noted in an earlier posting on this journey through the galleries, these are the sorts of little details and discoveries that, as an artist - even one working in a completely different medium - I marvel at and never fail to find aspects that can be applied to my drawings. 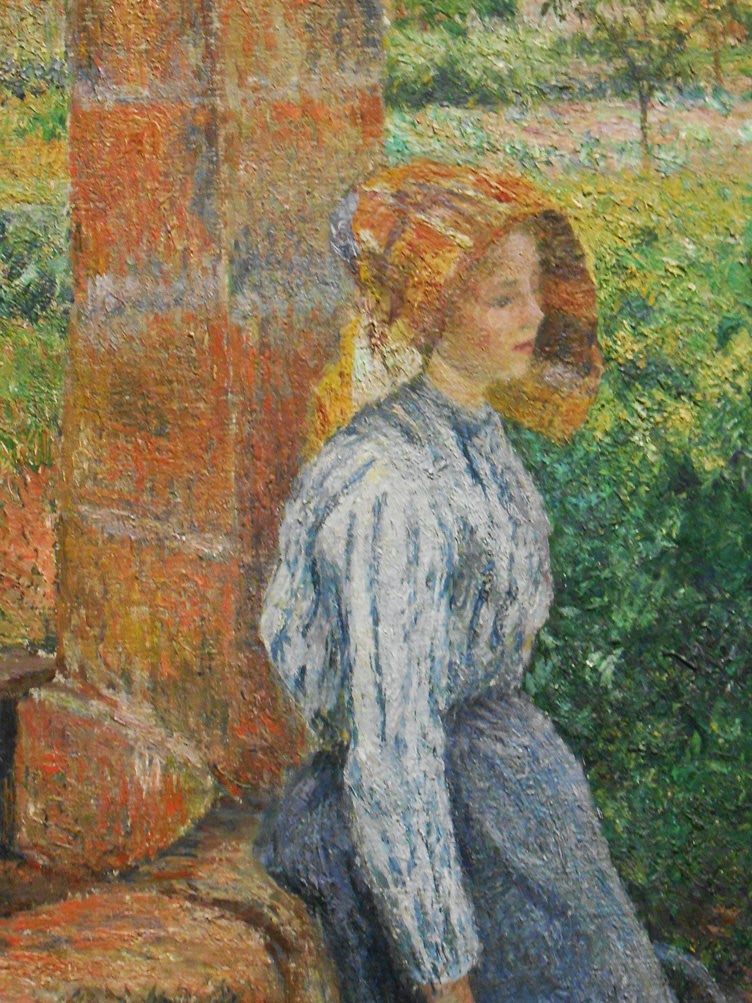 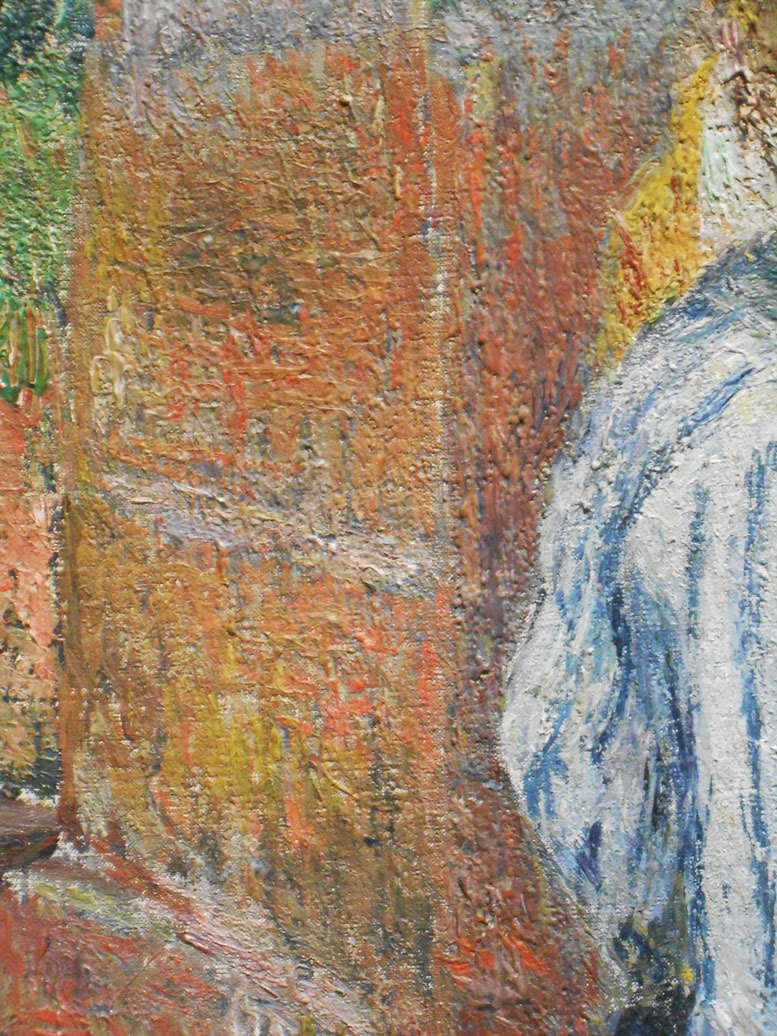 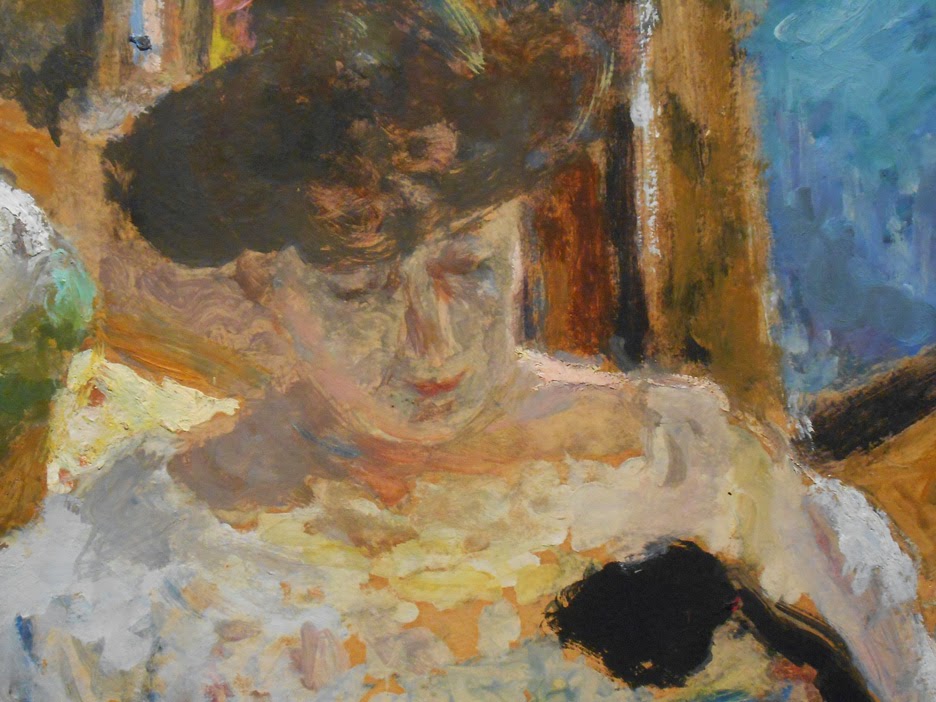 In Edouard Vuillard's 1906 Woman Seated on a Sofa (also known as The Dressing-Room, Madame Hessel Reading at Amfreville), ( a close in detail of which is shown immediately above), is seen a similar if more stabbing of the brush work with slashes of color forming his subject and her surroundings rather than smaller, more circular and softer dabbing as in the Pissarro.

In the next shot, also of another of Vuillard's figurative pieces, taking in the overall composition this time, you can easily see the almost complete lack of defining edges outlining the various elements in the work; the viewer's eye is left to do that defining through realizing the variations in value and color and shape of all the different dabs of paint and filling in the aspects that are missing to form a complete picture. 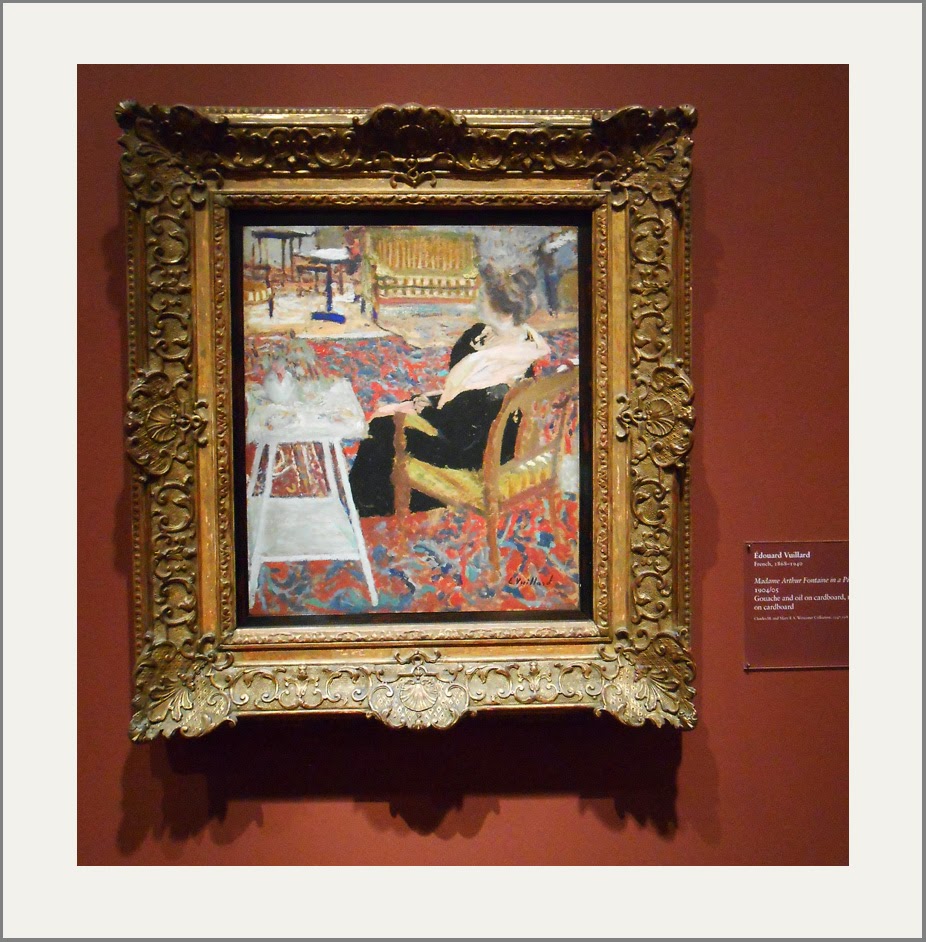 And finally, moving out into a larger open central atrium that acted as sort of a lobby off of which the many smaller, more intimate galleries were accessed, I was stunned and stopped dead in front of this wonderful discovery - Pardon in Brittany by Gaston La Touche. I had never heard the name before and the immediacy of the command of this particular work would not let me pass. My first thought was of how I had never heard of this painter from the later half of the 19th Century and secondly, how I had never been privileged to be acquainted with this work in particular. It truly took my breath away. For many moments I stood in complete awe as my eye took in all the subtlety of the work and dotted around from one spark of candle light to another. The overall softness of the work, in hues of mauve and soft pink and pale blue, interrupted by the strong value shifts in the deeper tonal shadows, really made the work sing. Though the subject matter lacked any great monumental aspects to the composition, it really commanded me to be engaged. I loved the simple gestural brush work that established all those white caps with much of it just being formed out of positioning a darker hue up against a lighter one with no real defining of each individual hat otherwise. The intensity and vivid oranges of the spots of candle light really added the important impact that this otherwise very quiet work required for it to be, in my estimation, one of the highlights and spectacular finds on my journey through The Art Institute of Chicago. The Institute has many more of La Touche's drawings in their collection, as noted here and there is no question that I shall be doing further exploration on this artist who has, till now, escaped my knowledge. 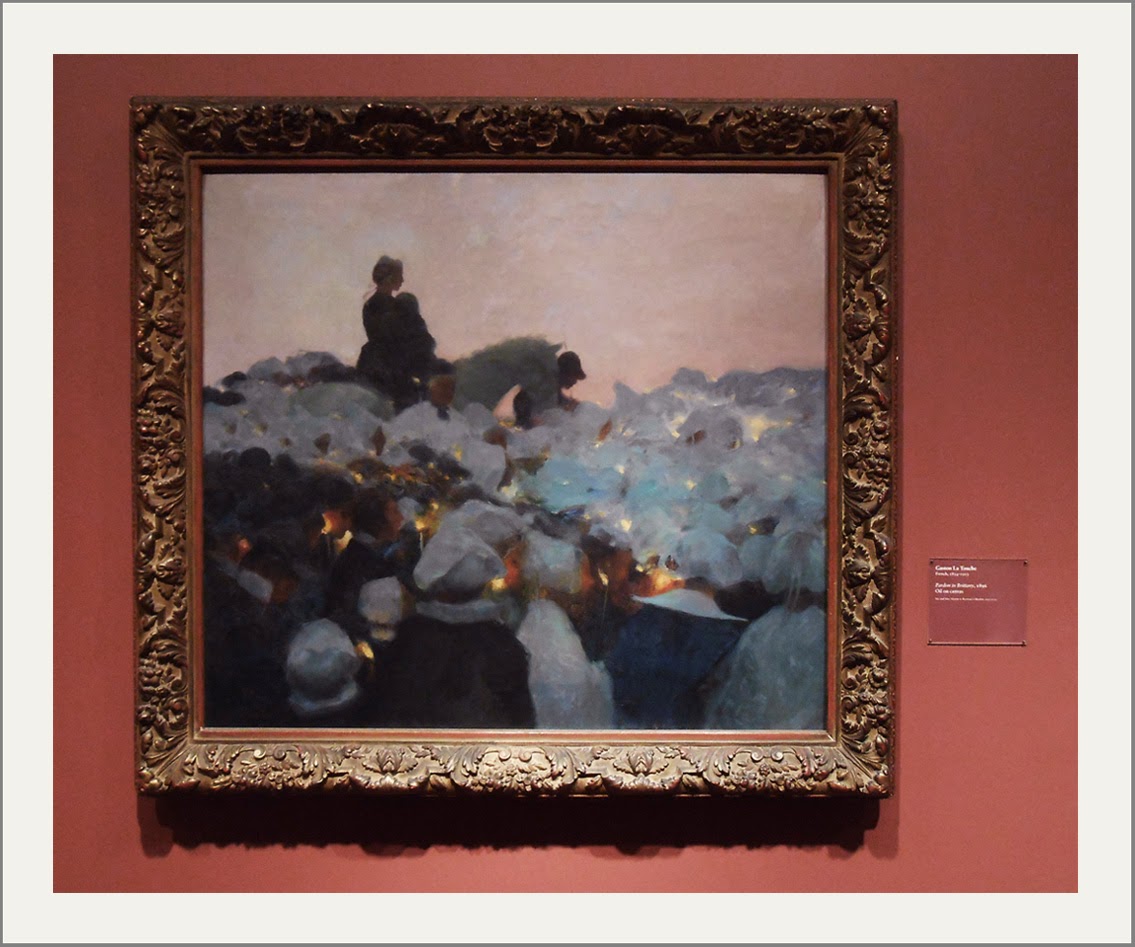 With thanks to my artist friend, Susan Fox (with whom I wondered the galleries on one of the two days that I visited the Institute, and who had taken some close up shots with her IPhone), here is a close in view of a detail of La Touche's genius. You can clearly see the immediacy of his brush work, and how many of the individual aspects of the crush of the large group of figures was done by simple juxtaposing of darker shades of color up against lighter shades, as in the many hats mentioned above. 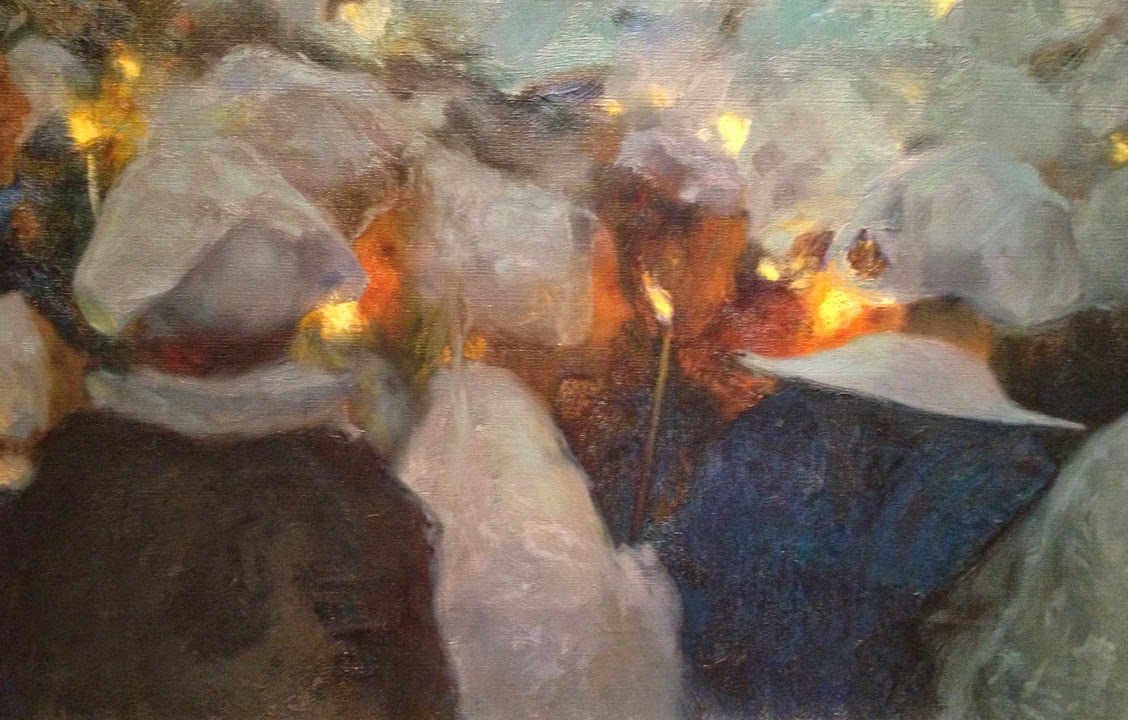 The insights and the opinions shared in this blog are appreciable. Blogger seems like an educated and knowledgeable writer with sensible thoughts. Good work and Keep it up.
exhibition stand contractors dubai