Some Great Americans at The Art Institute of Chicago 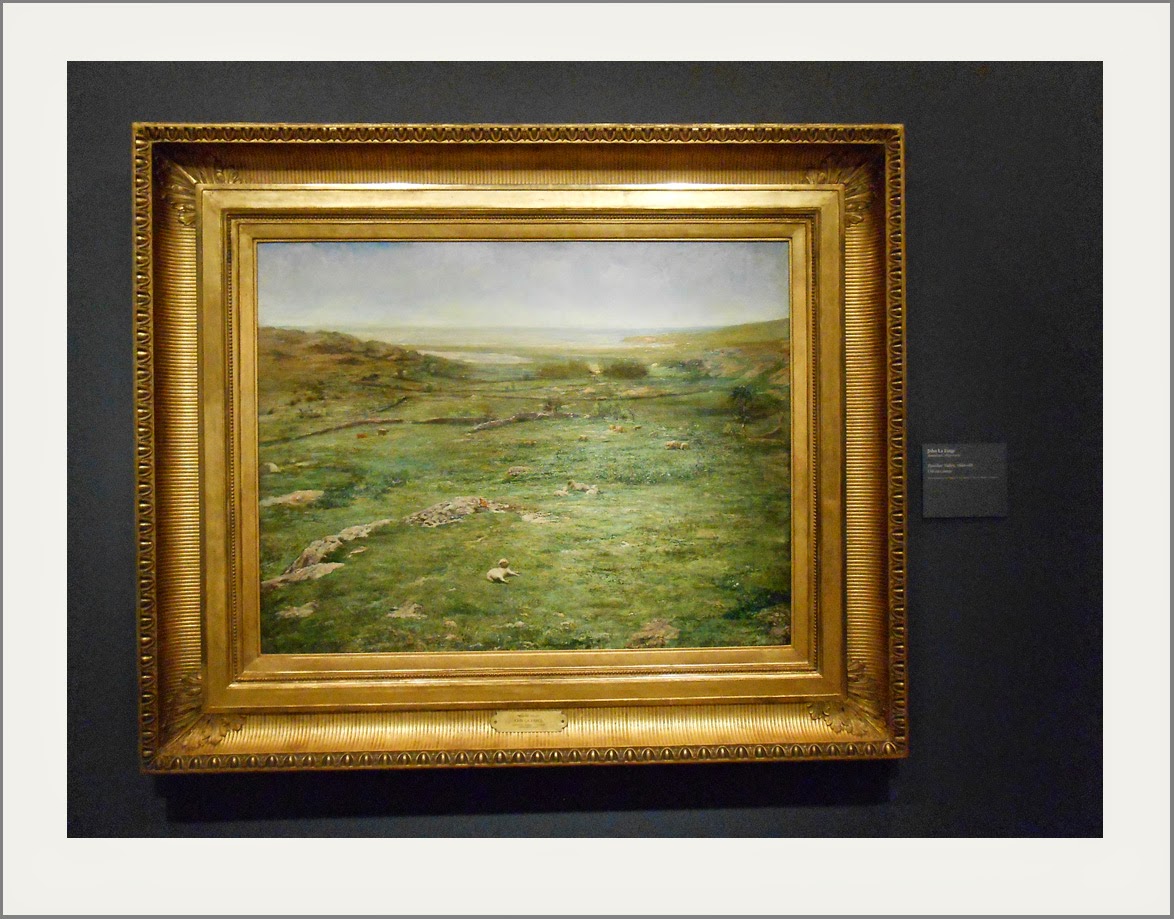 It's not the Great Gate of Kiev, as in the closing passage of Mussorgsky's Pictures at an Exhibition, but a wonderful landscape by American-born John La Farge that greeted me as I approached the galleries containing American art and artists of the 19th Century. Paradise Valley (above), a very calming, idyllic scene was a pleasant opening into several galleries filled with the works of many artists fairly well known to me, but with many particular works that I may not have been familiar with previous to my time at The Art Institute of Chicago. Today's concluding tour through this wing of the museum will be a fast one, as there are many works I want to spotlight and actually have left out quite a few of the images shot while visiting the Institute for the sake of brevity.

William Merritt Chase, a particular favorite of mine, has always inspired me with his unique vantage points and interesting angles to his compositional ideas. A City Park, painted in 1887 (below) is a perfect example of how, as I see it, Chase draws you into his works with great perspective and establishment of distance. I admire his ability to place his main subject, the seated woman, almost directly in the center of his canvas, which in the hands of a lesser artist might appear awkward and unbalanced, and to be able to keep the work well balanced through his focus on the long sandy walkway and the triangular shapes of grassy areas both left and right which all offer great interest, while not taking anything away from the focal point of the woman on the bench. All of those 'negative' spaces combining to give the work an overall feeling of pleasantness and equilibrium. 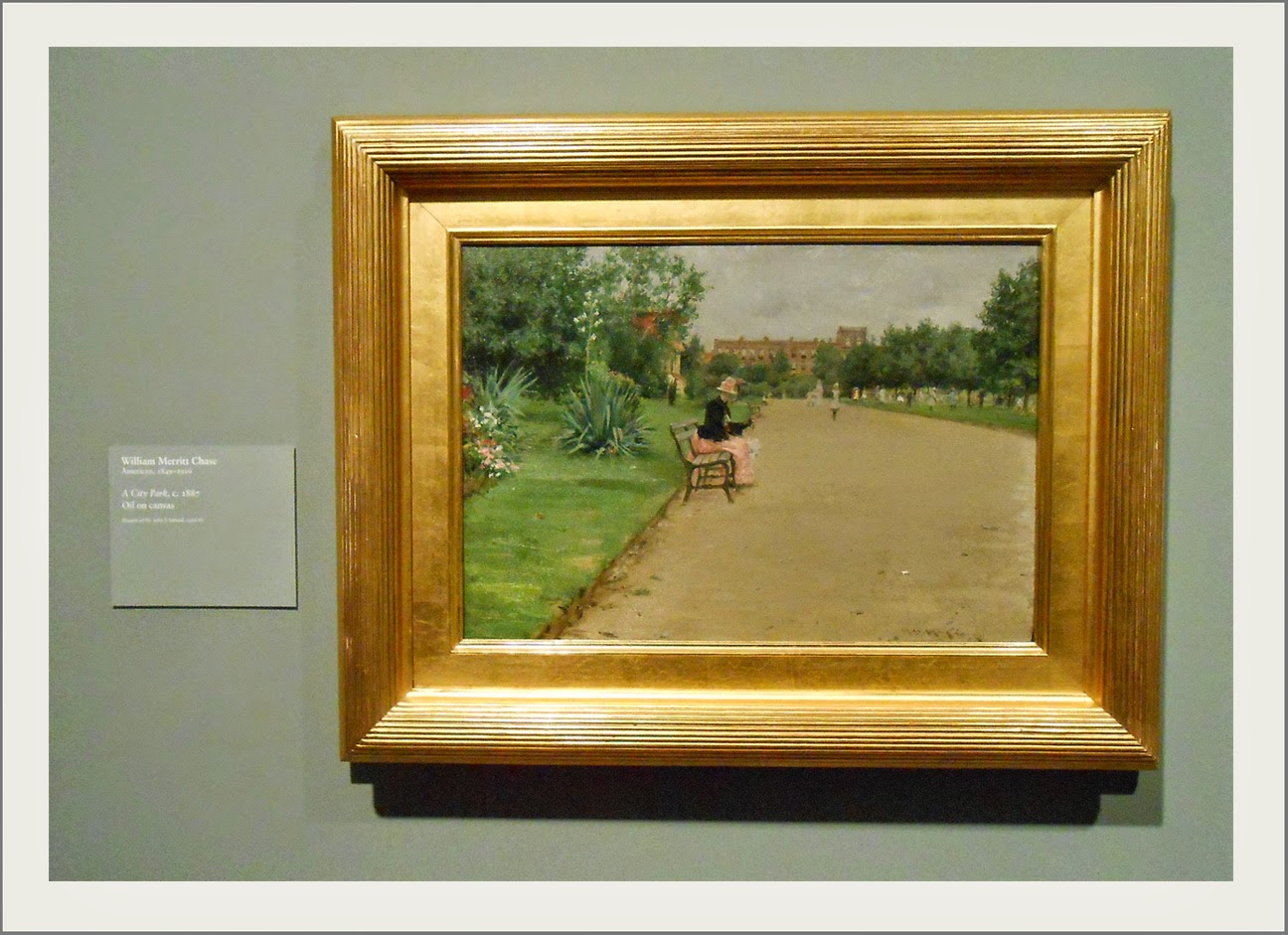 Another great 19th Century American, George Inness, has also always inspired me with the beauty of his landscapes and subtleties of his color palette. Influenced by the Barbizon School of artists, his work epitomizes the Tonalist approach to painting landscapes in the 1880s and 1890s on this side of the Atlantic. The two works below, both by Inness, show Tonalism at it's best. 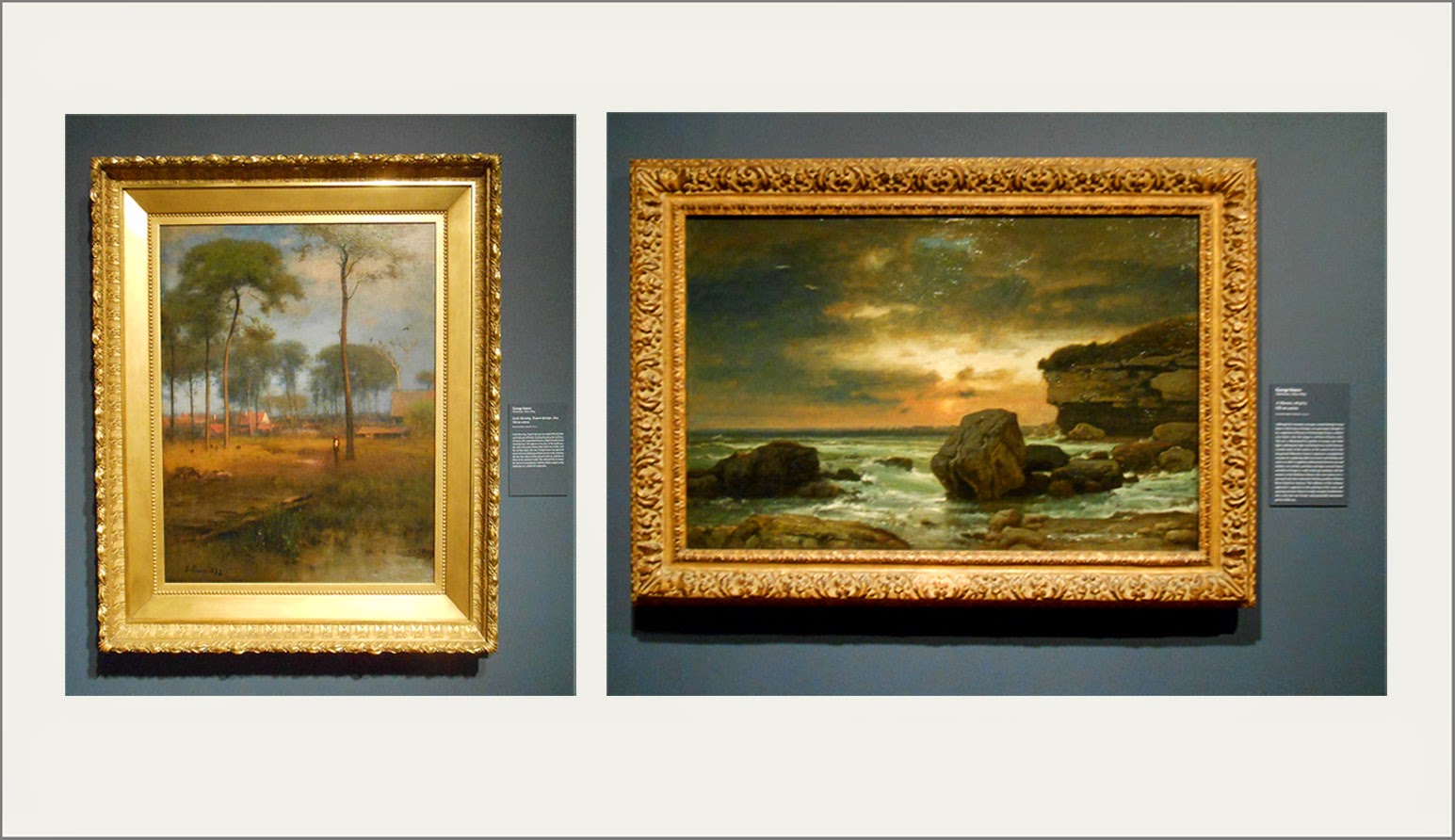 The next few images are of works that really spoke to me. In the first pairing, on the left is a Portrait of the Artist's Brother by James McNeill Whistler. On the right is a wonderful work I had never seen before by William Turner Dannat titled, Study for an Aragonese Smuggler. I really enjoyed the movement and evocative nature of that particular work. 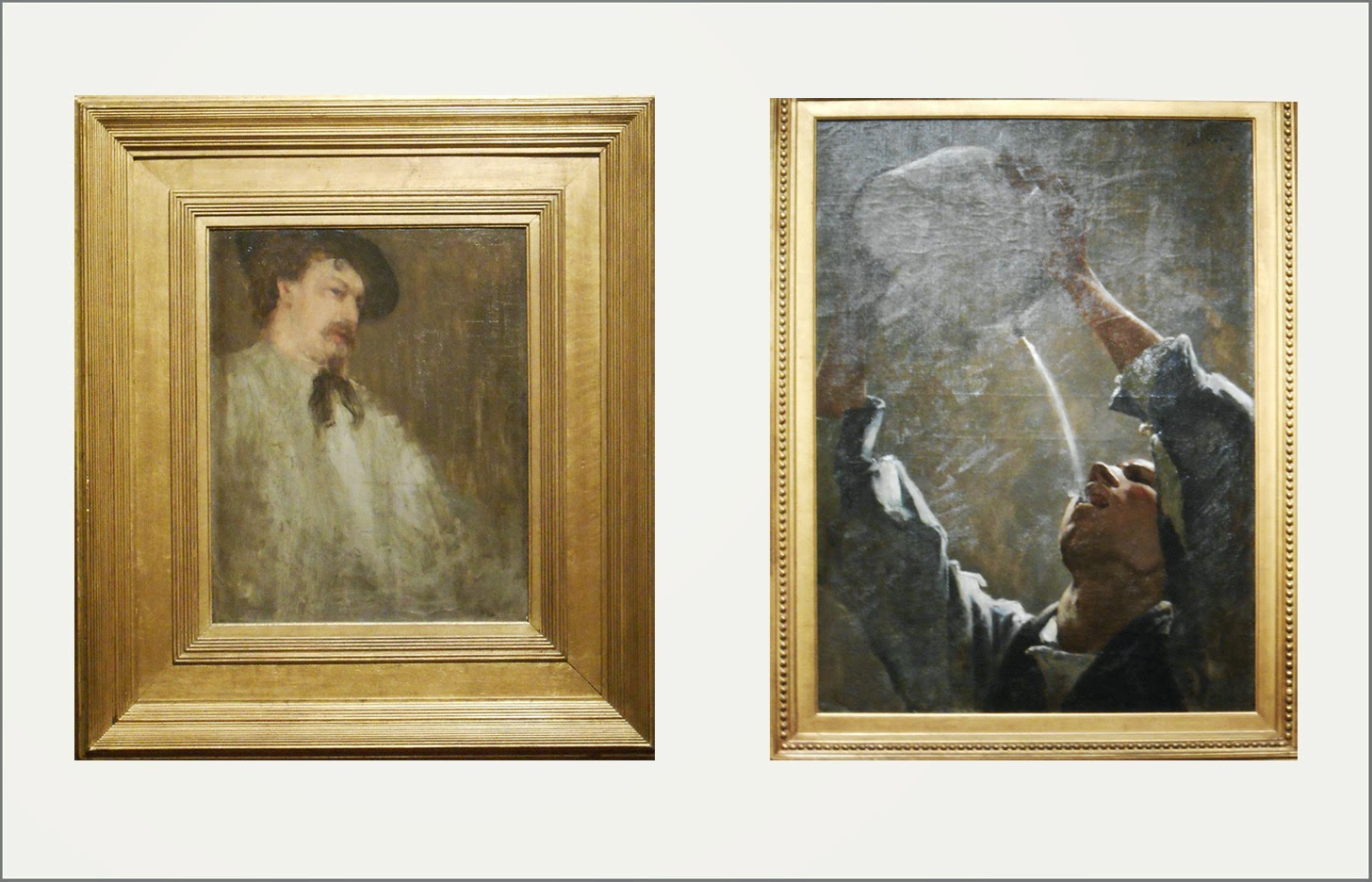 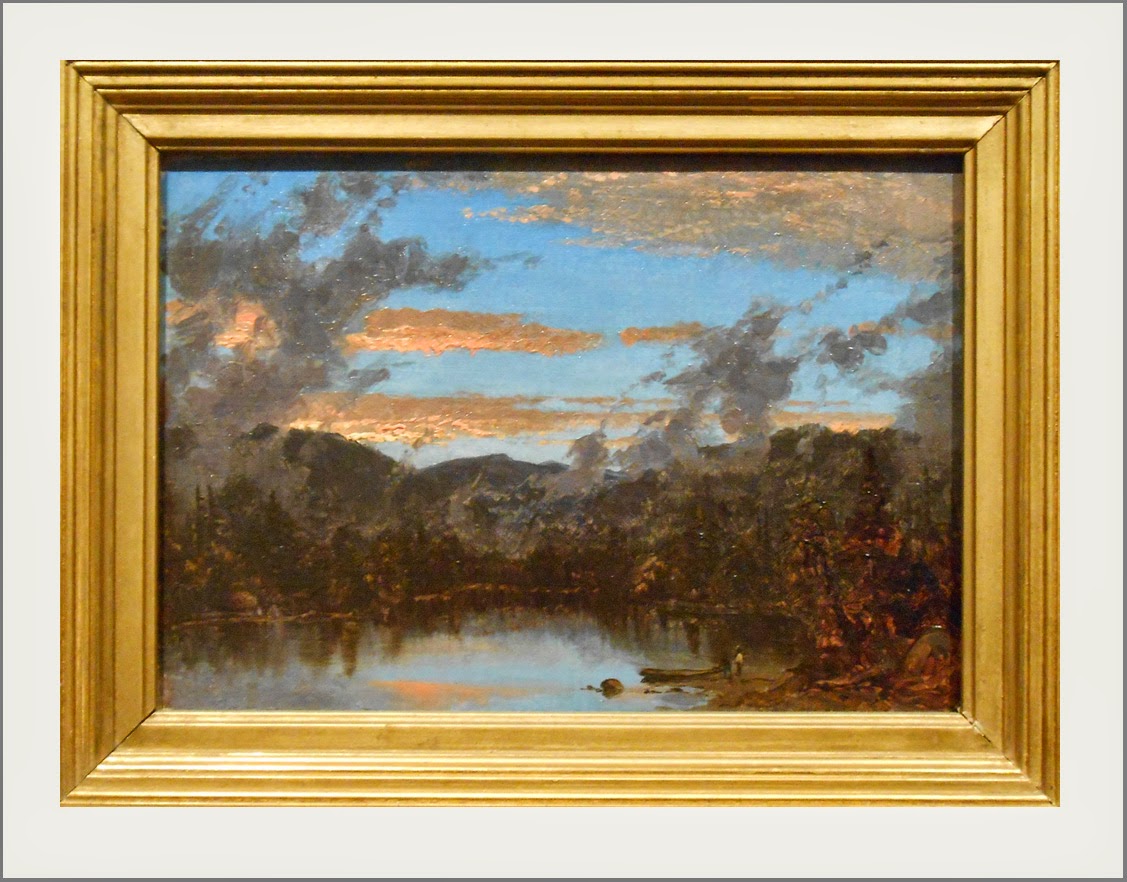 The lovely landscape, above, is by Sanford Robinson Gifford and portrays a beautiful sunset in the Catskill Mountains of upstate New York, an area quite familiar to me.

In the next pairing, I've juxtaposed another Whistler, a beautiful nocturne (on the right) with a work by Edouard Manet (Steamboat Leaving Boulogne) that was painted two decades or more before the Whistler. I could not help but make a very strong connection between the two works with their subdued coloration and rather indistinct brush work. 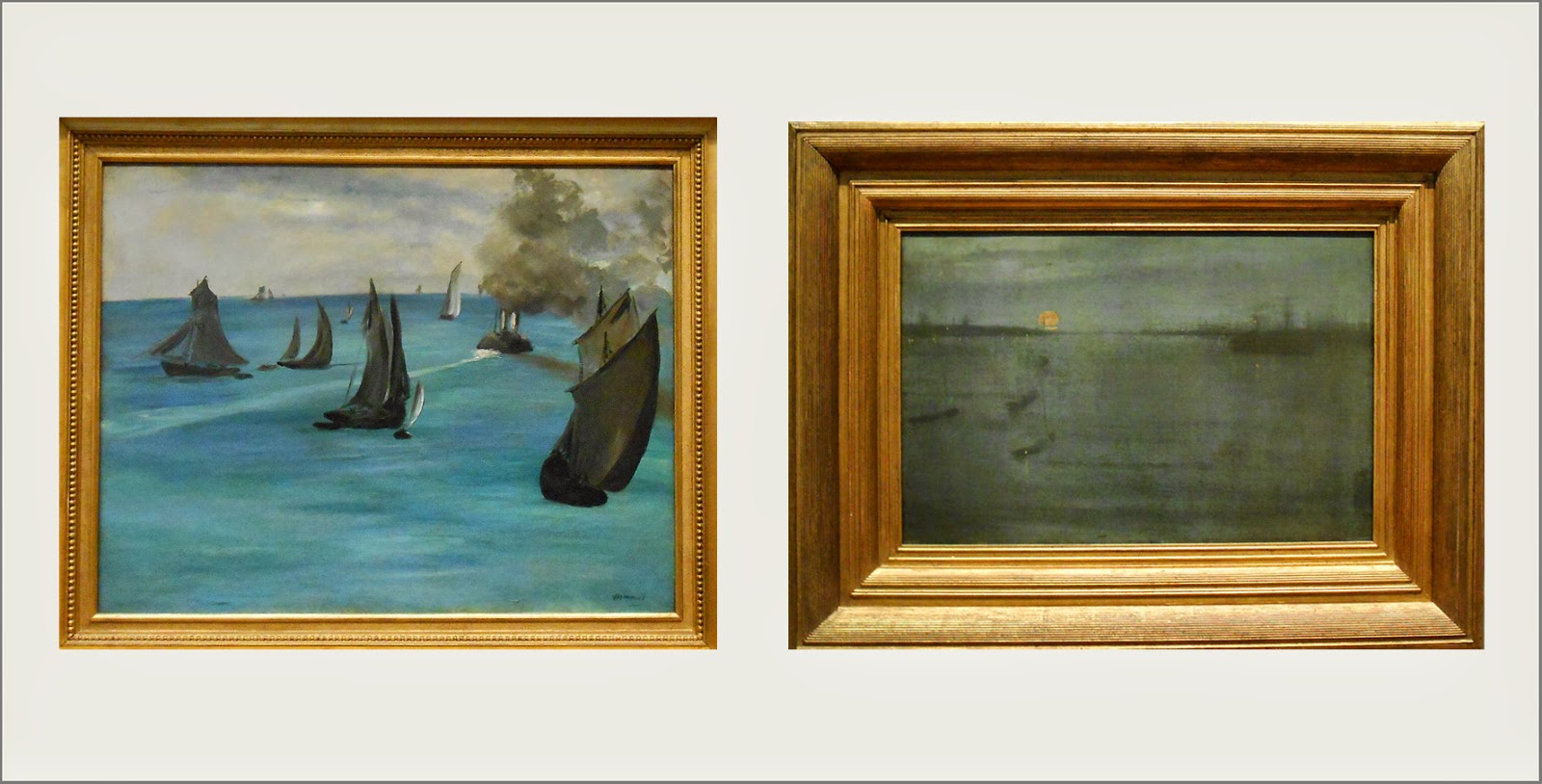 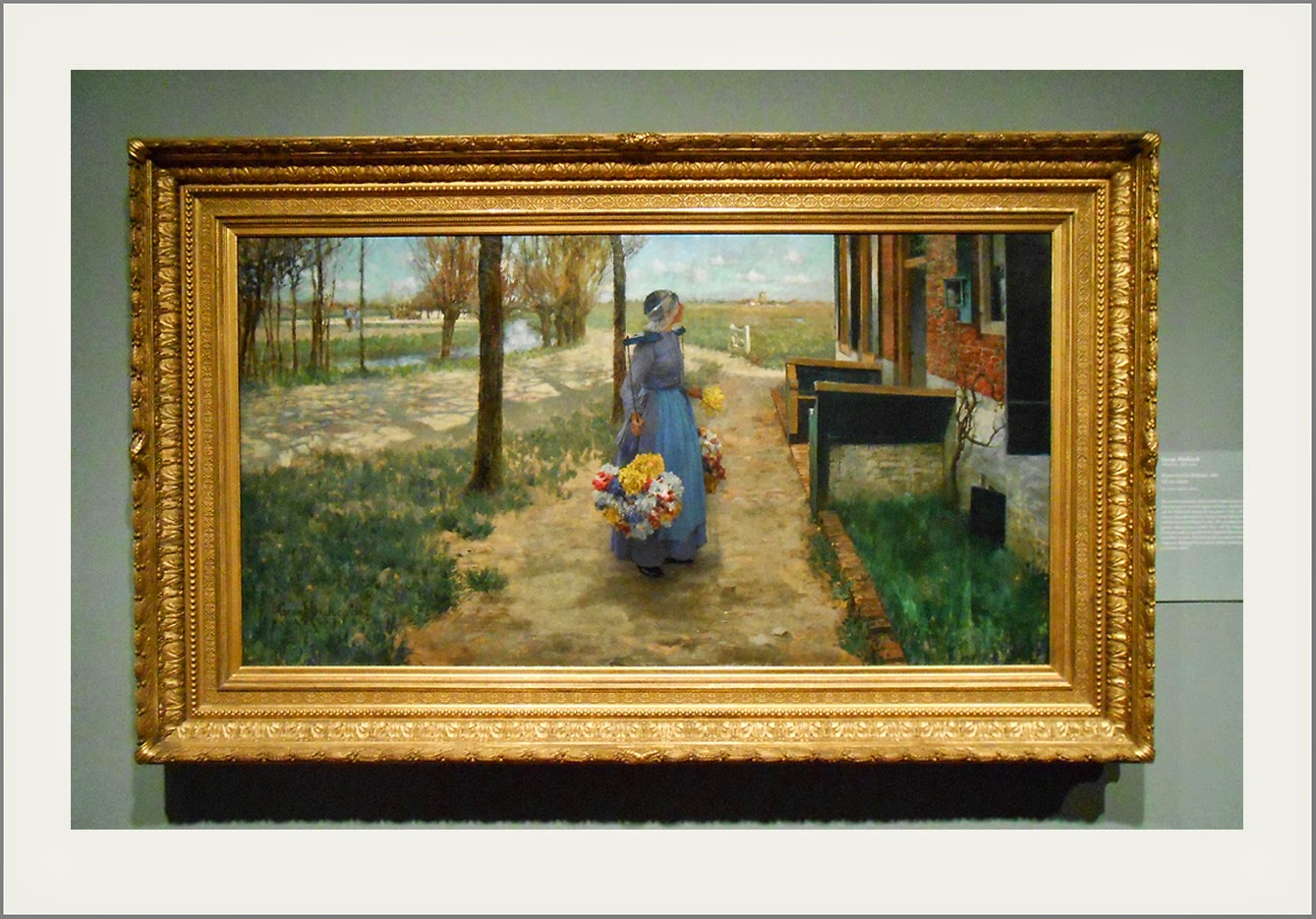 A 'discovery' for me . . . George Hitchcock, who lived the later half of the 19th Century into the early teens of the 20th, stopped me cold with the beautiful painting, above, Flower Girl in Holland, and again with the equally stunning work, below - The Annunciation. 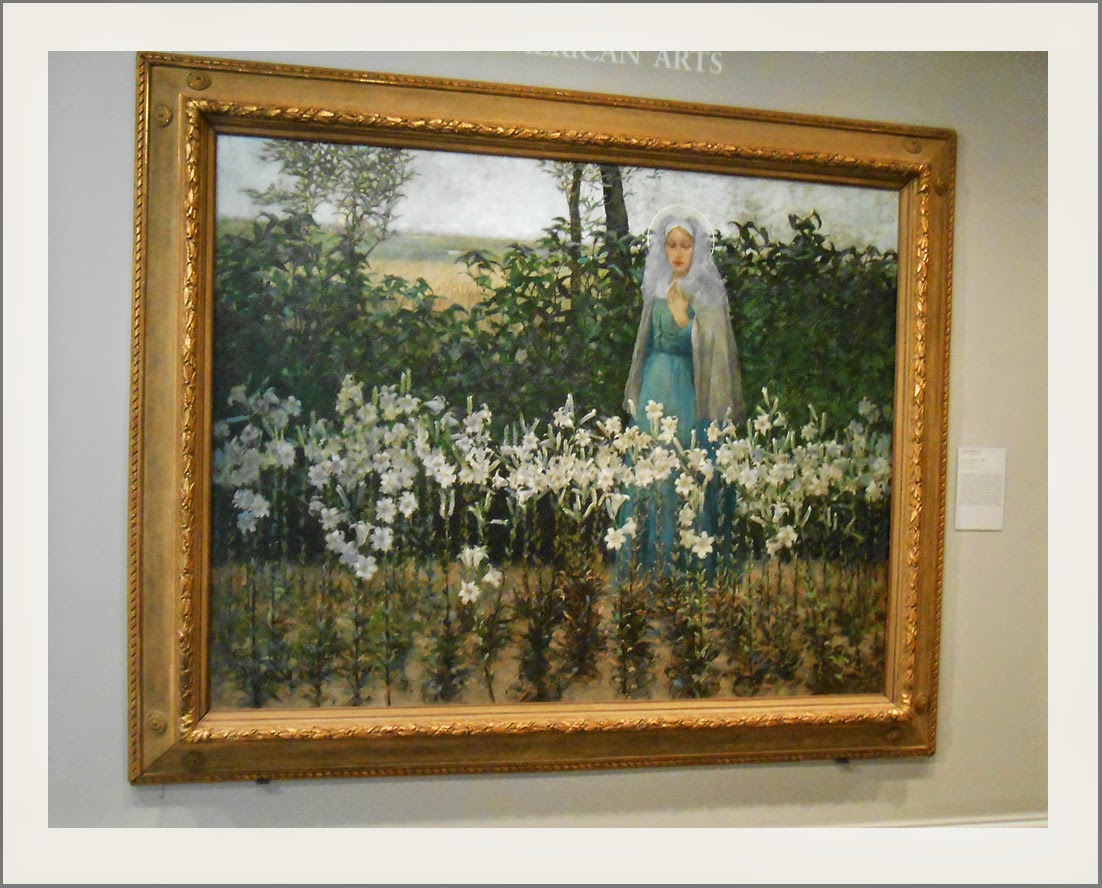 What visit to any museum worth its salt would be complete without seeing at least one John Singer Sargent. The Institute has several wonderful examples of his mastery of the portrait, including the one below, Mrs. George Swinton. Painted slightly before the close of the 19th Century, I was (as I always am) so taken with his beautiful rendering of satin and shiny fabric as seen in the detail to the left of the full portrait. 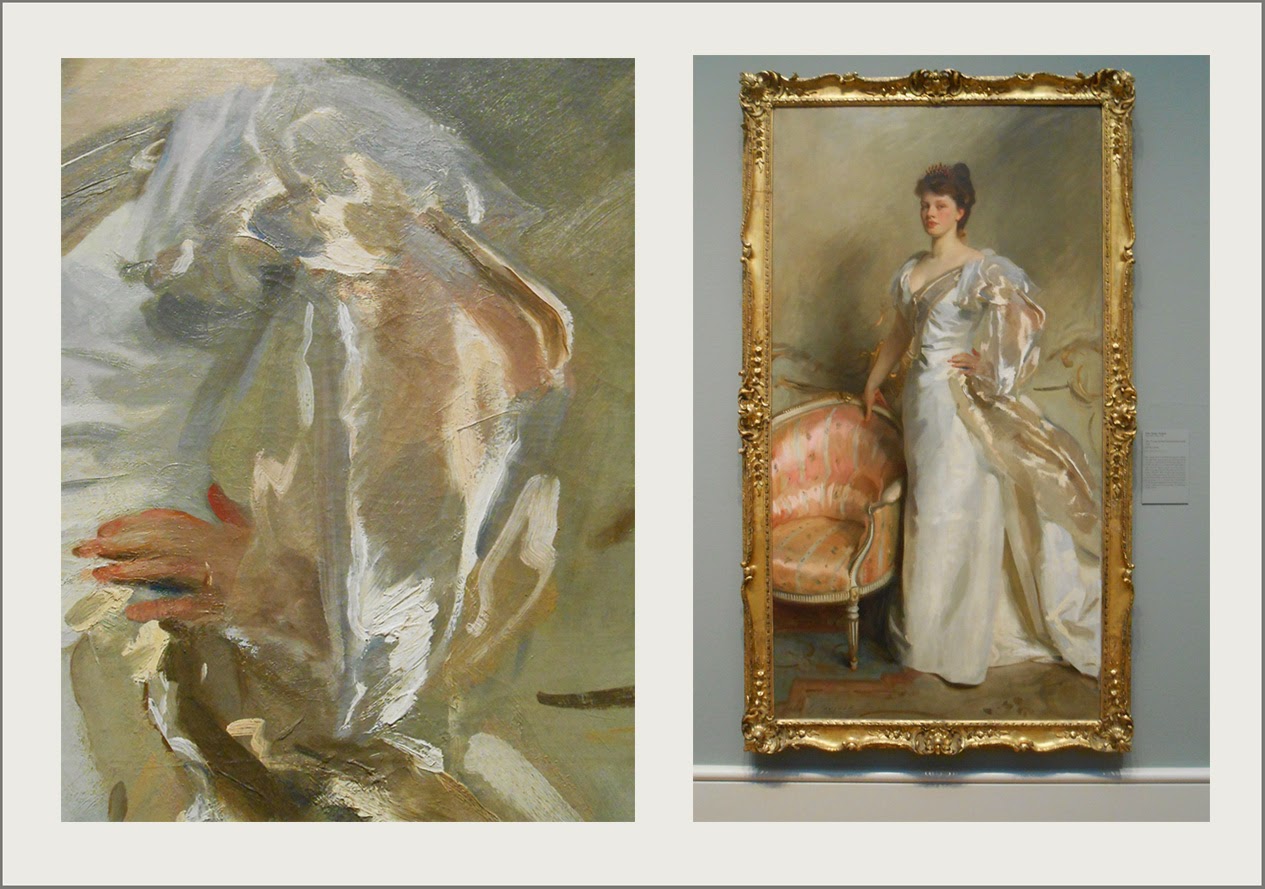 Sargent's rich brush work and application of paint, as noted in this detail, below, of The Fountain, Villa Torlonia, was another of the works in the collection at the Institute which caused me to pause and really admire his ability to push paint around! 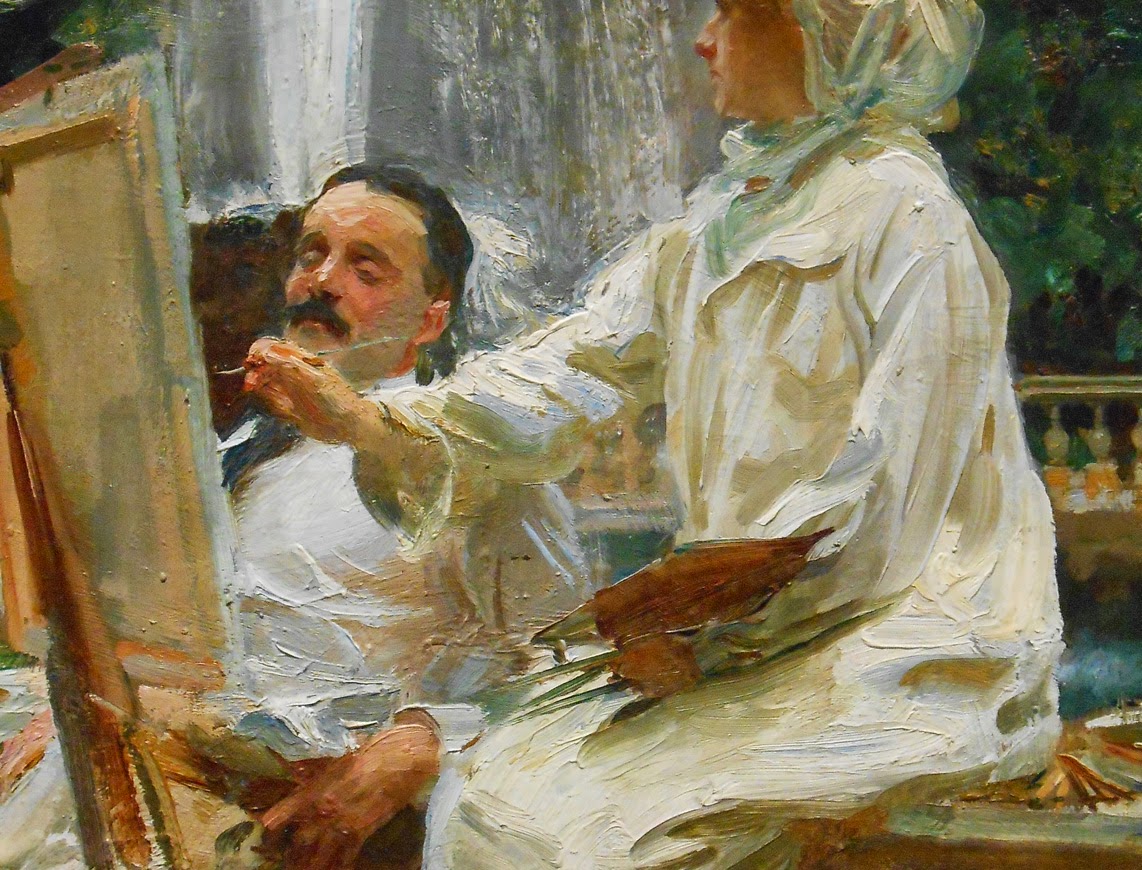 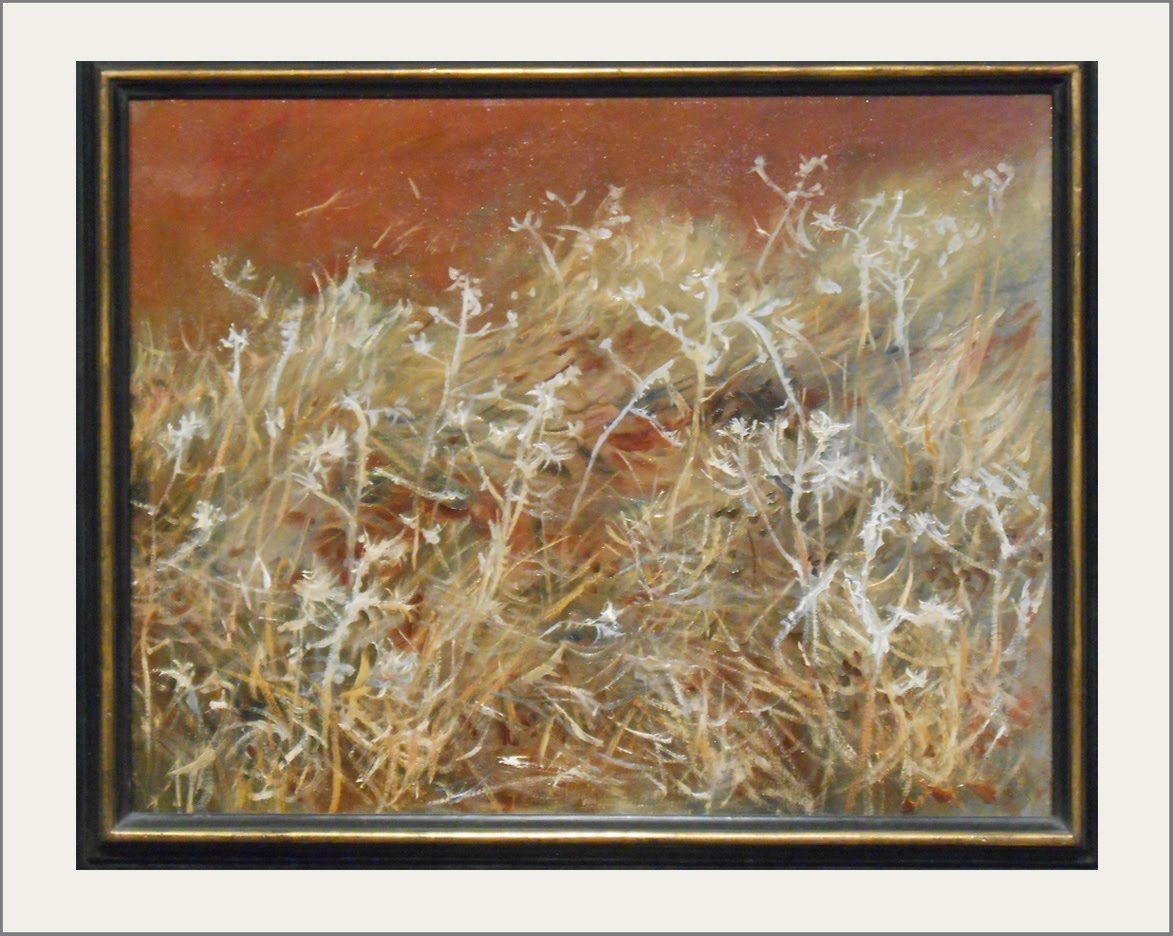 And this work, above, stunned me when I read the attribution label as being a Sargent. What a beautiful, airy rendering of Thistles.

Walter Ufer's The Solemn Pledge: Taos Indians, (below) began to lead me more into the 20th Century, painted in 1916, and signaled almost the end of my time at the Institute as I enjoyed the last of the works in the gallery. 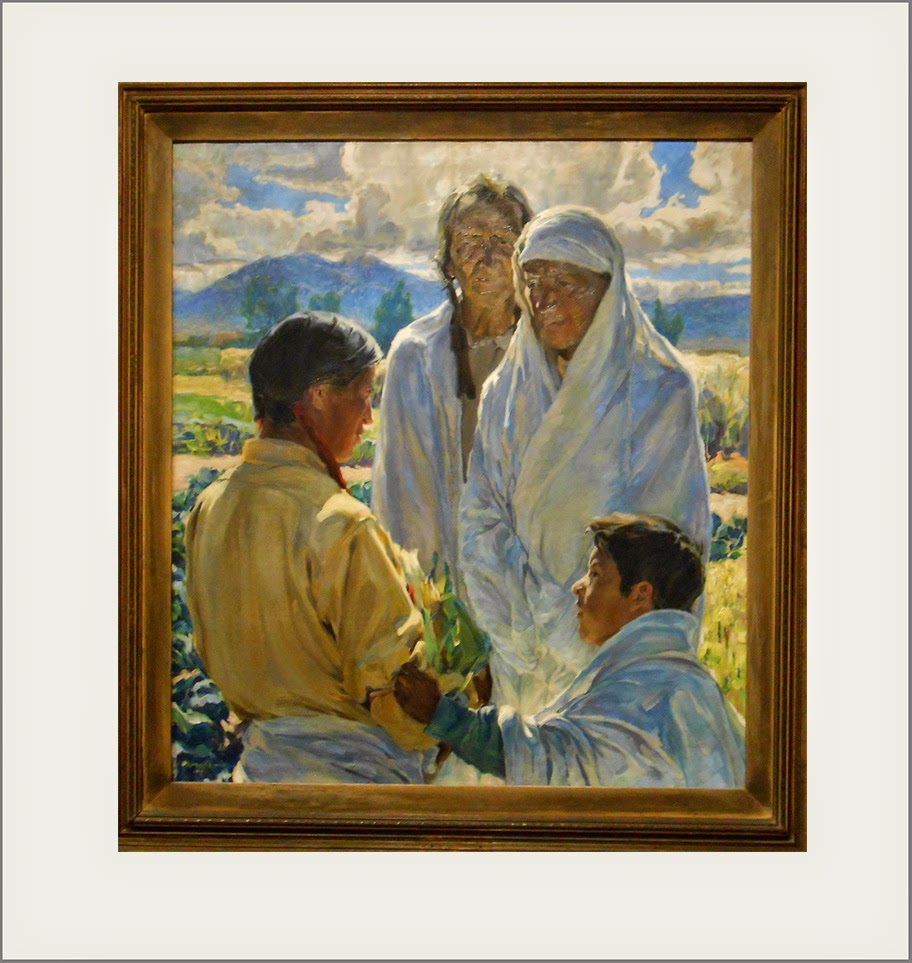 With stops at two more wonderful works, the first below by Gifford Beal - The Puff of Smoke - and the second below, one of Georgia O'Keeffe's iconic skulls, Cow's Skull with Calico Roses, my time of wandering through a hundred years worth of incredible art had come to an end. 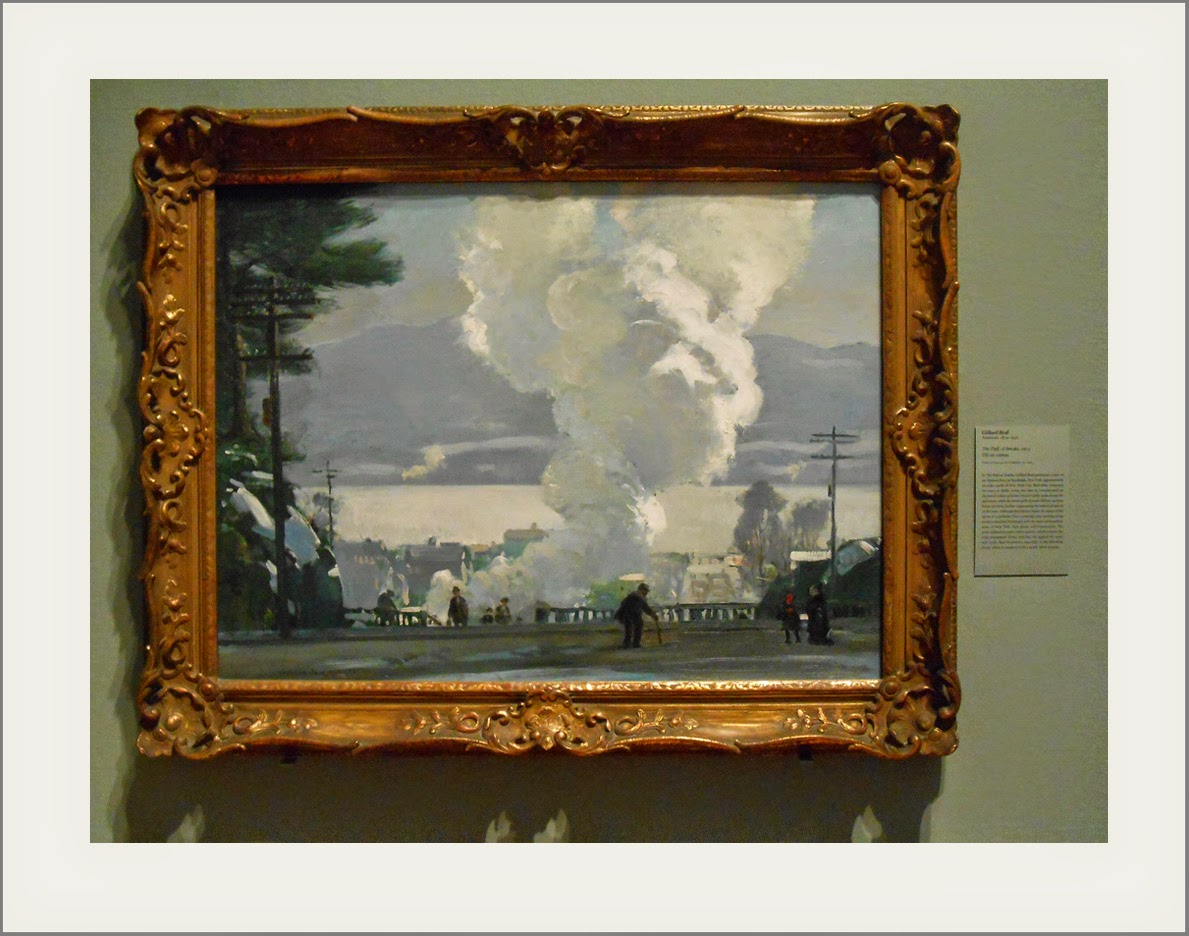 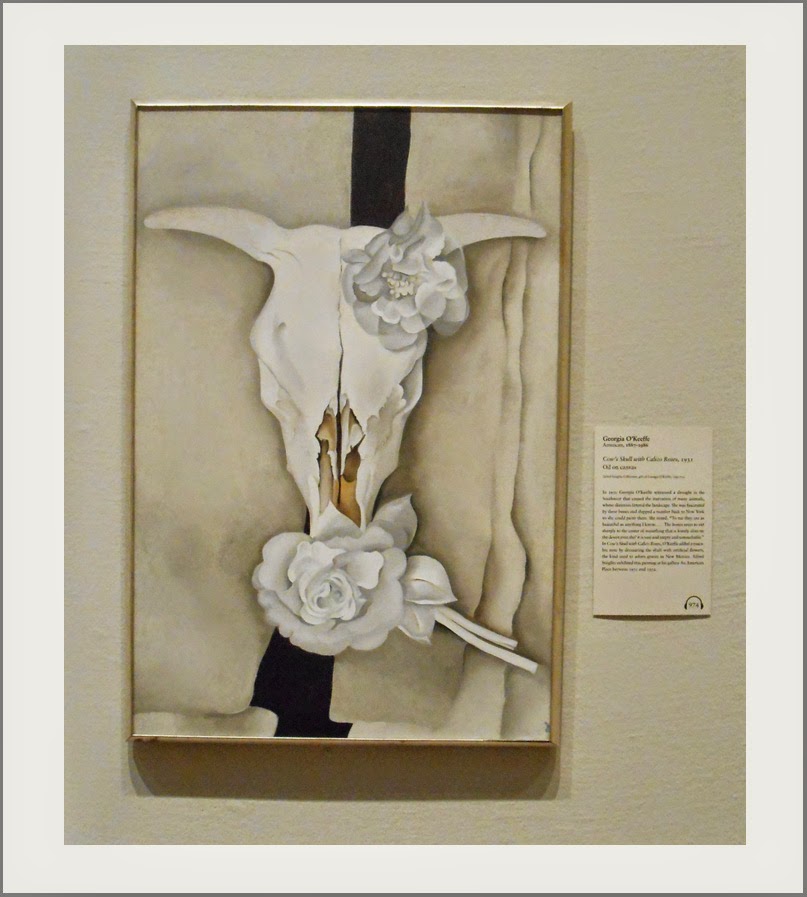 I hope to find myself in Chicago again in the not too distant future, so I can dig deeper into the vast collection at The Art Institute of Chicago. I hope also, that you've enjoyed your arm-chair visit with me! 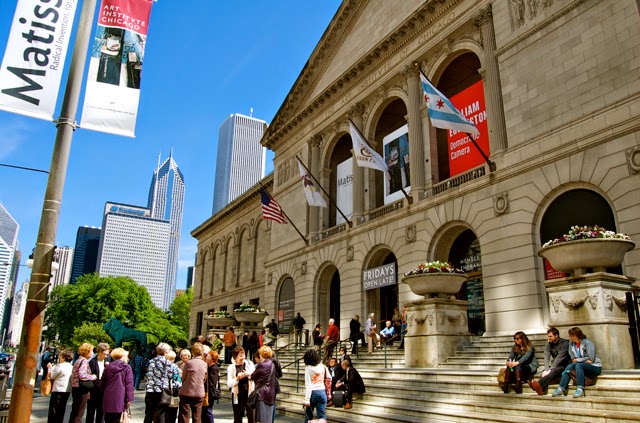 Count me in, Terry, as one that enjoyed the arm-chair visit! Surprises include the Sargent "Thistles." Thank you.