Some Thoughts on Compositional Ideas

I've had a couple of questions regarding the structure of the composition of this work, so will give a brief explanation of my thinking on this one now. First off, in the image above, I have split the work in half on the vertical center line. Since the figure was the main focus of the composition and her placement was pretty important, considering what was going to go on behind her and also considering the direction in which she is looking . . . making her 'look' the strong directional pull of the perceived movement in the work, her location was rather important. Thus, she sits just to the left of the center line, giving that important central focal point, but because she is looking right and would naturally pull the viewer's eye off to the right, the weight of her sunlit face needed to be left of center to balance the pull of her look to the right. As you can see, I put her as close to the center line as I could!

The strong horizontal 'x' formed by the two horses, bookending and giving interest on both extremes of the center line, helped also to add a bit more strength to the entry point, at the figure. The 'x' design on the back of her shirt was a wonderful, natural repeat of the 'x' movement of the larger composition.

Looking at just the left half of the work it would appear, at first, that there is a stronger amount of detail, perhaps throwing off the overall balance of the composition through the intensity of darks by means of the shadow falling across the horse's head and upper neck. But, my feeling was/is that by using strong sunlit highlights on the rear horse in the right half of the composition, the balance is maintained through a perception of equal weight to both halves of the overall composition. The addition of a strong area of shadow/darkness to the right of the rear horse's head, also added the right amount of balance to what was going on in the left half.

My initial idea, when working out the compositional idea in sketch form, was to have more texture/movement/sunlit highlights in the distant foliage in the background. But, once I began the work and as I added strength through darks and shadows, it became apparent to me that my initial idea would not work, not only because it would have provided too much 'interest' to the background (which I had wanted to be just some interesting textural addition to the composition) but that it would also have thrown off the right/left balance if I had done what I had thought to do which was to have a lot of sunlit highlights on the leaves to the extreme right.

I like the fact that the 'busy' work is all pretty much on the left of center, while the softer more texturally subtle work counteracts to the right of center. Positioning the figure's right hand as I did also added just the right amount of sharp contrasting interest to the right of the center line and helps to direct the viewer's eye up and to the highlights on the rear horse which, I feel, helps to move one into the work and to begin the journey through it.

Pretty much finished up last night, but with a few final touches added this morning, this work has been brought to its conclusion. 'Rhinestone Cowgirl', measuring 7" x 21" and drawn on 3 ply Bristol Board, is the first of several new works that will be going to Windrush Gallery in Sedona, Arizona later in April. I am very pleased to announce my connection with this well known, well respected gallery in beautiful Sedona and excited to have my work hang alongside that of other highly acclaimed, nationally recognized artists. Having this new venue to show my work has enabled me to look into some reference material that I have not felt comfortable delving into for my east coast galleries and I expect some new inspiration to be coming to the forefront over the next few weeks and months as I develop works for this new southwestern location for my work.

The last two days' worth of work on this one. I've been doing a lot of tightening and small adjustments along with finally getting close to completion of the foreground horse. Now, the really hard stuff begins . . . the background. I want to make sure it does not distract from the major focus yet want to have some interest and variation of texture. I guess it shall be seen as to how it all plays out over the next few days. I would like this one cleaned up and completed by the end of the day on Sunday.

Posted by Terry Miller at 4:55 PM No comments:

The third installment of the current work. Yes, there is a person front and center and yes, it is me doing the drawing! People have never really taken a 'center stage' position in my work but I thought, hey why not! So, this is an 'experiment' to see how it goes. This will be another good-sized work, chiming in at 21" in width. Lots of horse flesh yet to draw.
Posted by Terry Miller at 5:04 PM 1 comment: 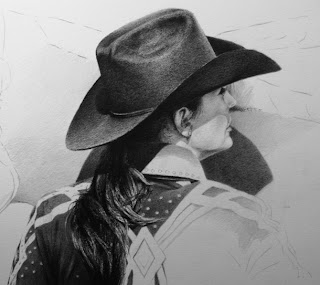 The hat now has an owner!
Posted by Terry Miller at 5:10 PM 1 comment:

Look, I made a Hat 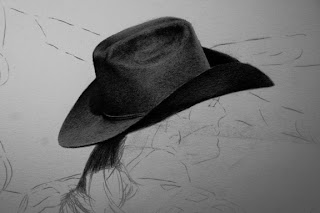 I'm very fond of quoting from Stephen Sondheim's Sunday in the Park with George, one of my favorite works by Sondheim and of particular interest because it revolves around a stylized, fictional version of the life of George Seurat, one of my favorite painters.

In the play, fictional George sings of painting a hat on one of his figures in the famous painting, A Sunday Afternoon on the Island of La Grande Jatte. The marvelous lyrics of Sondheim always grab me, leave me breathless on occasion and in this rapid fire song about not only painting a hat, but also about love and life, he embodies a lot of what the artist senses and feels as he works . . . focused solely on his canvas and the life that it exudes.

I know how fictional George felt as he worked and focused on his hat. I've often said that my life revolves around my drawing board and when I am focused on work, like today in making a hat - where there never was a hat, I derive just as much joy as fictional George did, contemplating life, love and making a hat.
Posted by Terry Miller at 2:13 PM No comments:

With a little over a month till the entry deadline for this year's edition of the jury for Birds in Art, I've uploaded my two entries to the Woodson this morning. I figured since both are done and ready I might as well have gone ahead and gotten it over with today. One group of submissions out of the way now and several others yet to come for other jury review in the next couple of months. I'll leave it to my readers to consider which two recent works might be my entries today, no hints from me!

And to all my artist friends who are submitting works for jury consideration, good luck!

As I came downstairs this morning and walked through the studio, I paused a moment over the drawing board to take a first look at the possibly finished work. After a minute or two, I was happy that I did not see anything that jumped up at me and said, 'needs work'. So, this piece is ready to head to the work table for mat and frame later today. 'Stretch' measures 6.5" x 25.5". Yet one more work so far this year, based on reference material gathered a bit over a year ago on my week on the west coast of Florida. I knew I got great 'stuff' to work from on the trip, and now that five works have been completed thus far this year using just a tad of that marvelous reference, it might be time to put it aside and dig into some completely different reference for the next few works. I have some interesting new commitments coming up in a few months time that command me to take a look at some different landscapes and ideas. What's next? Come back to see!
Posted by Terry Miller at 9:20 AM 5 comments:

I did not post at the end of studio time yesterday, so will get this up this morning. I thought about just waiting till later today when I anticipate this work being completed, but figured I'd post this image, about three hours from finishing it up, and then post the finished work tomorrow after I have had a chance to let it sit overnight for a final review in the morning tomorrow to make certain that there are no final touches to be made. Invariably, after letting a work sit overnight, I can usually detect a needed touch up, darkening of a shadow, softening of a texture or some other final stroke before signing my name and getting it in its frame. Coming at something with a fresh eye always pulls those few needed points of addition or supplement to the forefront making them immediately apparent.

Feathers in earnest now; soft blending, subtle tones, developing dimension and depth - this is the stuff that makes me smile as I work.
Posted by Terry Miller at 3:11 PM 3 comments:

Feathers! Time for a different texture.
Posted by Terry Miller at 3:44 PM No comments:

The sand between my toes - Part two.
Ah, you may very well ask why it is that I began this work with the 'background' rather than the major subjects. I decided to get the tough stuff out of the way first! This one is almost 26" in width so lots of noodling, picking, poking, dotting, dashing, diddling and 'coloring' going on right now. I think the next work up on the drawing board after this one is going to have a lot of 'white' background!
Posted by Terry Miller at 2:00 PM 1 comment:

There has been something taking shape on the drawing board the last few days.
Think I've got sand between my toes.
Posted by Terry Miller at 2:09 PM No comments: