Splendor in the Pans

A little divergence this morning from posting what is on or coming off the drawing board. As I was toggling through Facebook postings this morning, I stopped at a very familiar photo image posted by a long time acquaintance of the famous Baines Baobabs in Botswana. Almost immediately memories and images and even smells of a long ago journey came flooding back to me.

It was the summer of 1999 . . . I and a host of other artists and collectors traveled to South Africa and then on to Botswana for a fabulous week and a half of roaming through the Okavango Delta region. Overnighting in very gracious mobile tented camps, we enjoyed a feast of wildlife and landscapes. I had traveled to eastern Africa many times before, but these new landscapes and the beauty of the Delta were new to me and I was busy soaking up everything in sight.

On one very special morning, we were given the opportunity for a long, several hour drive out to the edge of the Nxai Pans, part of the vast Makgadikgadi Pan system of central Botswana, to see the famous group of baobab trees made so by the English nineteenth century painter, Sir Thomas Baines. I'd heard of the trees before this trip but knew nothing about them beyond some minor reading I had done previous. I expect that I never thought I might have the opportunity to see them in person and, of course, was one of the first to raise his hand when asked if I would be willing to rise up very early in the middle of the night for the long drive.

As I recall it now, not everyone of the group opted for the trip but certainly enough for several vehicles full. Now a bit of back story here, we were traveling through Botswana during a cooler season so the evenings were certainly sweat shirt and sweater worthy. So, on the given night, we all prepared for very early 'wake up calls' and bundled out of cozy and warm cots and into very cold and wide open vehicles. As you can see in the picture below, shot at one of our brief stops along the way, we were all bundled up to the ears with blankets and layers of clothing and even some with gloves on! I recall that long, long drive in the dark of night, barreling along the roadway with nothing to protect against the onrushing cold air that blasted us in the face as we sped south away from our overnight camp. We drove and drove and drove and froze and froze and froze! Riding in open vehicles with all that cold air slapping us in our faces was, I guess, sort of like ridding on the wing of an airplane!

At several points along the drive I recall thinking to myself whether this was going to result in something of importance or why on earth had I decided to go! All of us in my particular vehicle were trying to keep up the most positive attitude and expectations and kept joking about it all, meanwhile staying as bundled up as possible and trying to keep the wind off of exposed skin surfaces.

At some point, I think I lost consciousness and took a brief nap, only to wake to the continuing cold. Then, somewhere in the distance, and to the east I assumed since that portion of the sky seemed to be beginning to brighten up and the beauty of the night sky, which in that part of the world always struck me as being so much brighter and more filled with stars than I could have imagined, the dawn seemed imminent. I strained my eyes to see the landscape and it was pretty flat with very low growing shrubs and lots of yellow grasses.

Suddenly, someone up front spoke up and said they thought they saw something up ahead and on the horizon. I lifted up my cold, cold head and thought I detected something too. Now, we had gotten up at that unholy hour and drove through the coldest part of the night because our tour leaders said we could reach the famous trees at sunrise if we did that and that sunrise was a time of magic at Baines. Well, by this time I had just about frozen up and thought I would never make it upright and out of the vehicle!

The landscape around us began to thin out, fewer and fewer shrubs and plants and more of that endless yellow grass and then more sand and flatness. And then . . . up ahead and just to the left of the direction we were traveling, I saw them . . . standing stark still on the flat horizon, seemingly floating across an expanse of water which in actuality was the endless sands of the dry pans which were once a huge lake bed . . . Baines Baobabs.

Their naked branches stretched to the sky which was now brightening very rapidly and the great yellow/orange hot ball of the sun was beginning to peek over the flat line of the distant horizon. The trees vibrated with hot red color and as we got closer the shapes of the individual trees began to expose themselves out of the jumble of twists and turns and bulbous shapes that, seen from a further distance, looked like a big blob of broken toys.

We came to a stop on the endless flat sand that surrounded the little island of grass and trees and all managed to unwrap from layers of blankets to stumble out onto the ground and marvel at the sight before us. I recall, even now, just how quiet it was. I don't even remember hearing any bird songs, just the slight whoosh of a gentle wind blowing across the vastness of the pan and the muffled conversations as we all stood in amazement at this little brood of ancient trees.

I don't know how long it actually took me to pull my camera out of its bag and even begin to think about taking some photos, but eventually I found myself standing off some distance so I could take in the entirety of these beautiful, living things. They stood out in the middle of nowhere it seemed for as I looked around in all directions, there was little but flat sand and endless views off to the distant horizon. I could sense this little island of vegetation once, a long, long time ago, being surrounded by water and the vast ancient lake and began to move around amid the jumble just relishing all the twists and textures and the weather beaten shapes.

As I look through my photos now, prints as this was BD, before digital for me, I easily must have shot two rolls of 36 exposure, maybe more for the ones that got thrown away after first review after development, and the images are every bit as magical today as they were a dozen years ago. It has been many, many years since the last time I really dug into this material and am so thankful for the Facebook prod this morning to once again be able to bring to mind, so fresh and so strong, the memories of that incredible morning in the summer of 1999.

I am a very lucky guy to have traveled to Africa seven different times, let alone once. And, I am even luckier that I had a morning like the one that let me stand at the foot of the Baines Baobabs and think to myself that every moment of cold, rushing wind against my face and every moment of being bundled up and bouncing along dark roads for hours and hours in the middle of the night in Botswana, allowed me to have memories like this. 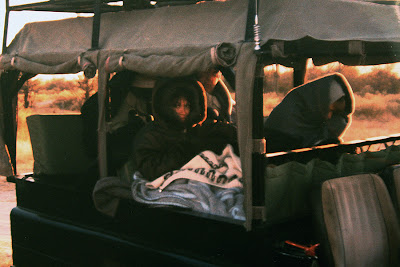 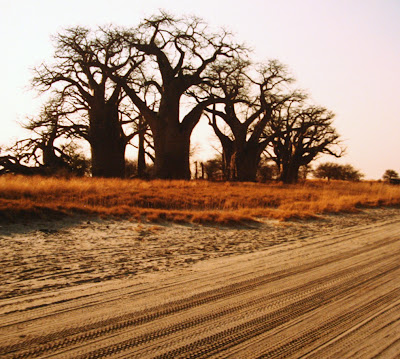 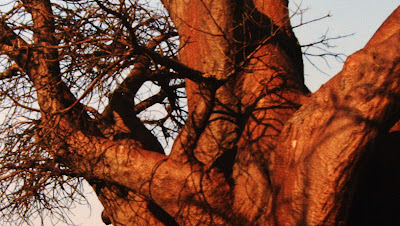 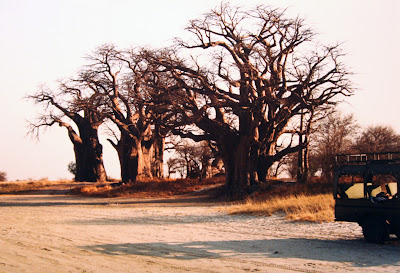 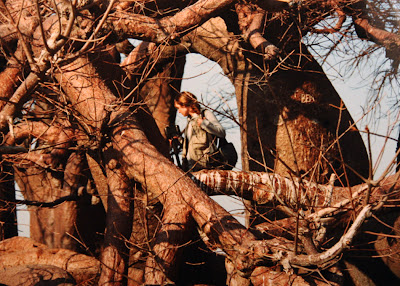 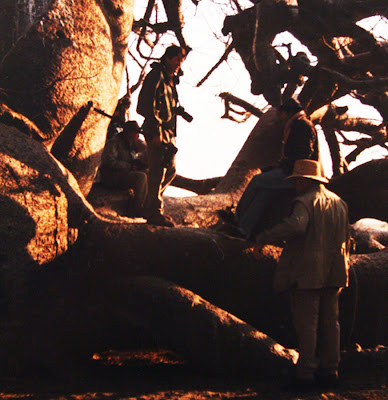 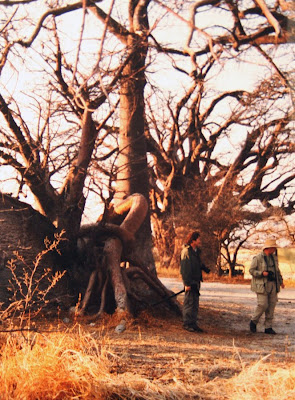 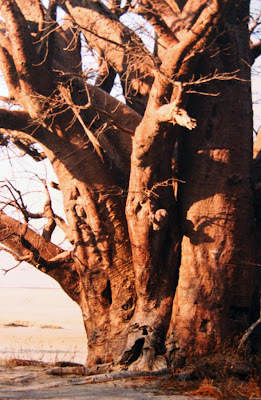 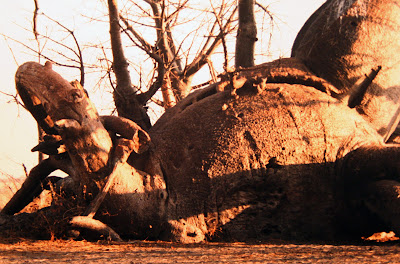 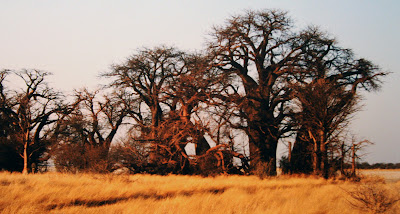 I have yet to draw these wonderful trees, have not found the right composition to emphasize their uniqueness and majesty, but someday!
Posted by Terry Miller at 11:34 AM

What a magnificent picture you painted Terry. Thank you for sharing.

Great story,although I have lived in Botswana 11 years I have yet to visit Baines Baobabs.Your description of early morning drives in the back of an open vehicle is spot on .