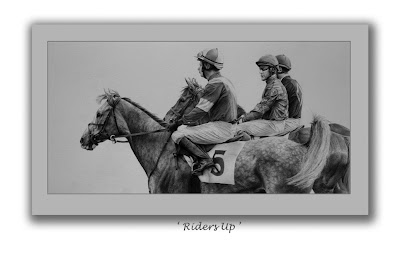 This new work, done on 4 ply kid finish Bristol Board, was completed yesterday afternoon. The image size on this one is 10" x 20" and as I mentioned before, a rather large work for me. It is another work that will now be put aside for a forthcoming special fall show at the end of September, an invitational event that I will be doing for the first time and so want my works to make a good impression. Including the human form in several of these works, like the recently completed The Line Up posted a couple weeks ago, has been a challenge for me as I have not done people to a great extent till just recently. I am beginning to feel a bit more comfortable about incorporating people into my compositional ideas, especially with such a lot of fine reference material from my day at the Virginia Gold Cup Races back in early May. If someone had told me a year or more ago that I would be inspired to, occasionally, bring people into my work I would have responded as I have always responded by saying, hardly! That is one of the things about being an artist that not only surprises but keeps the spirit alive; discovering the unexpected inspiration. As I have talked about times before, prior to my move to semi-rural Maryland ten years ago, the thought of doing a work with cows or barns or sheep as subjects never entered my mind. Being exposed to such images and views and available field study on a daily basis after my arrival in Maryland, certainly opened up an entirely new avenue of inspiration to me. I am thankful for that as the challenge of these new possibilities of subject matter have certainly made an impression on me and have led me down some very interesting and gratifying paths as an artist in the last decade. Who knows what is around that next corner?
Posted by Terry Miller at 8:27 AM 3 comments:

A Word - About a Word

"A hasty or undetailed drawing or painting often made as a preliminary study.

[from Dutch schets, via Italian from Latin schedius hastily made, from Greek skhedios unprepared]

Noun1.sketch - preliminary drawing for later elaboration; "he made several studies before starting to paint"

a rough plan, drawing or painting He made several sketches before starting the portrait.

sketch - describe roughly or briefly or give the main points."

A word or two today about a word - Sketch.

In a series of recent comments on the current work on my drawing board, the word 'sketch' was mentioned with reference to the image posted, followed by several comments alluding to a perceived misuse of that word with regard to the work at hand. So, I dug around on the net this morning and found a few examples of definitions for that word, including some derivational history, and felt I might want to make a few comments regarding all this.

First off, let me say that this is not in any way intended to belittle a comment or to take to task anyone's use of that word in a less than appropriately defined manner, nor do I mean any of what is to follow to single out any individual for an unintended misuse of the word. I simply wanted to make a few comments on how I, as an artist, feel about that word.

As noted in the spotlighted definitions above, I've always, personally, used the word 'sketch' in the manner defined: to connote something in a rough, preliminary stage or a starting point; a plan; a conceptual idea simply worked out quickly with no intention of it representing a final, finished work. As an artist myself, I guess I have always just understood the true meaning of the word but at the same time, have a realization that anyone not intimately involved in creative endeavors or with a more encompassing knowledge base, might not share that same understanding of the meaning of the word. There are indeed, many words that have association with other professions or uniquely connected situations that I have a less than complete understanding of and have found myself, from time to time, misusing or inappropriately referring to them. It's all relative.

I stopped counting the number of times in the past, when I would hear someone comment to me at an art show or large exhibition event just how sincerely they had an appreciation for my 'pencil sketches' and knowing that it must have taken me hours and hours of hard work. I suppose there was a time, back when I first started to show work in a professional setting with other artists, that sort of remark made a little dent in my skin, but I always understood in the back of my mind that the remark was never intended as a put down or a way of diminishing my work and that person's sincere respect for it. They just did not have a fuller understanding of the appropriate terminology for a finished drawing on paper. It's a bit easier to look at a painting and be able to refer to it as a 'painting', no matter what the paint medium might be - oil, watercolor, gouache, acrylic - with a full understanding that it is a finished work of art even if you are not an artist yourself. It's easier to look at a photograph and have a complete understanding that what you are looking at is a 'photograph', again no matter whether it be a black and white, a sepia tone, or color image.

A finished drawing on the other hand, for many, may not be understood to command a similar quality of completeness since the historic, general understanding in many people's minds is that of a 'drawing' as being rough in comparison to a painted work. The casual art viewer, leafing through a quality book of art reproductions, might come across a drawn out study for a painting or a page from a famous artist's sketch book showing simple line/shadow/gestural notations and make a connection between those pencil works and the simplicity that a study entails and then, naturally, bring that information forward and define, in their own minds, all pencil work to be of a study nature; a 'sketch' unrelated to what might be a fuller, more involved and complete work.

To my way of thinking, there is nothing 'wrong' with someone going through that informational process and making connections between what is seen and what might be understood, as long as there is an openness to a fuller and more accurate line of knowledge down the road. As an artist then, I feel it is part of my responsibility to guide and inform and impart the knowledge that I have to anyone who asks or seems the least bit interested in having a more appropriate knowledge. Those same individuals who might refer to my 'pencil sketches' with appreciation will often follow up that comment by apologizing for maybe not knowing the appropriate way of describing my work or asking if that is what I call my work. There's always that teachable moment, that instance when a correction can be offered and explained. I've never felt I had a situation like that, after politely and respectfully defining my work as a finished drawing rather than a simple sketch, when a person then, walked away feeling like they had been put in their place or felt like they'd just been belittled. They generally thank me for clarification and leave with, I hope, an increased knowledge that will come to mind the next time they encounter a work of art that might not be of total familiarity from a medium standpoint or technical style, and perhaps they will not fear showing a lack of knowledge and ask again for guidance.

So, does hearing my work described as being a 'sketch' bother me? Not totally. I understand what is being implied by the comment and can simply and respectfully insert a redefinition of it as being . . . a finished drawing! 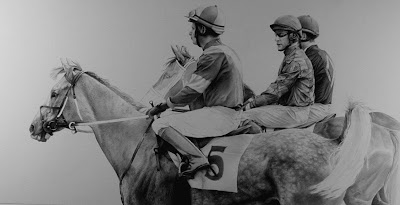 Another day, another couple hours of work.
Posted by Terry Miller at 4:39 PM 4 comments: 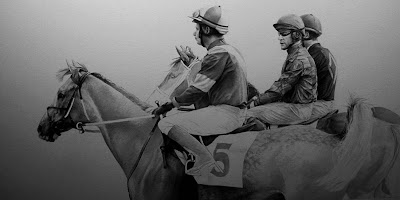 This afternoon's work.
Posted by Terry Miller at 5:13 PM No comments: 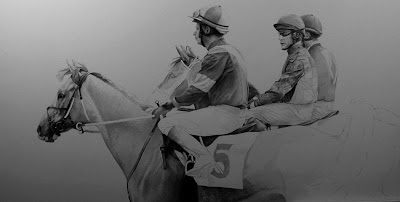 More people!
Posted by Terry Miller at 4:59 PM No comments: 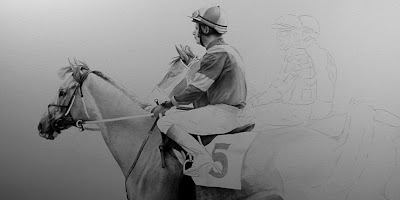 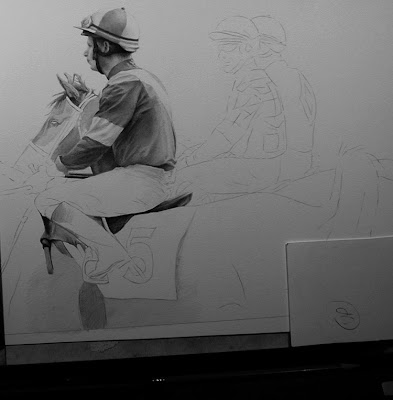 Something new taking shape on the board. Holy cow, it's people!
Posted by Terry Miller at 4:17 PM No comments:

Yet another remarkable morning spent with the National Zoo's lion cubs. They are now approaching 10 and 11 months old and are still just as entertaining as when I first saw them a bit over three months ago. Need I say how many images were shot today? I will be anxious to sink my teeth into this material later in the fall. 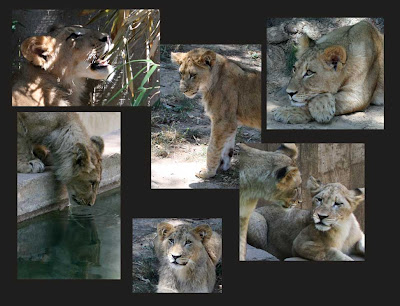 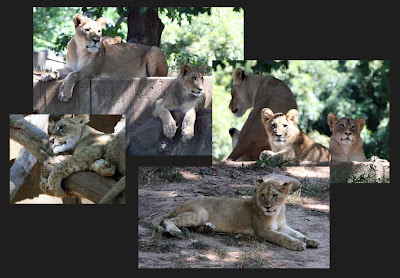 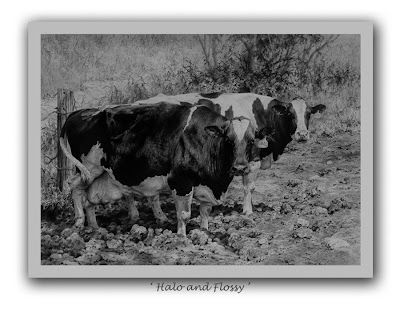 Been pushing graphite around again today! 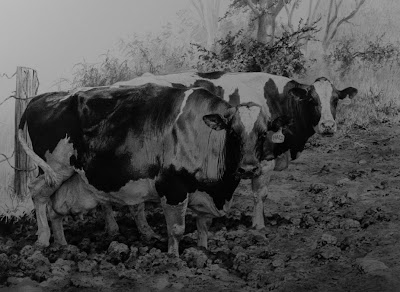 With 4 hours into it today, I'm starting to make certain that there is going to be a good balance across the entire composition between lights and darks, textures and shapes. 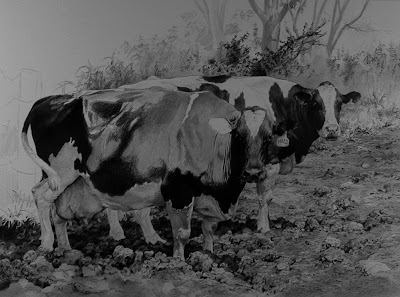 Posted by Terry Miller at 4:50 PM No comments:

A bit of work time today and the ladies are progressing . . . 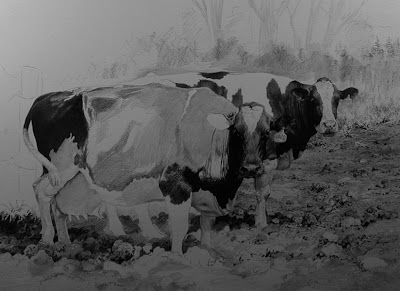 Posted by Terry Miller at 4:42 PM No comments: 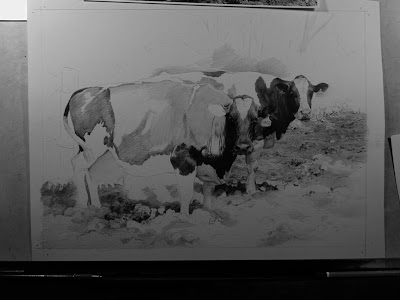 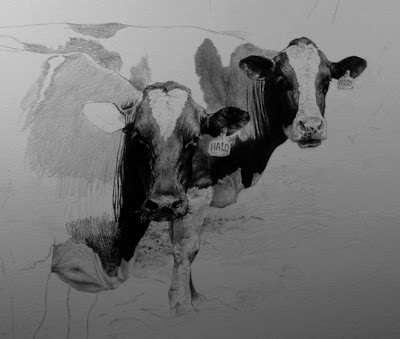 Perhaps I've been horsin' around enough for the time being and now it is time for something a bit more bovine! Horses will be back soon enough but for now, cows it shall be.
Posted by Terry Miller at 10:38 AM 1 comment: