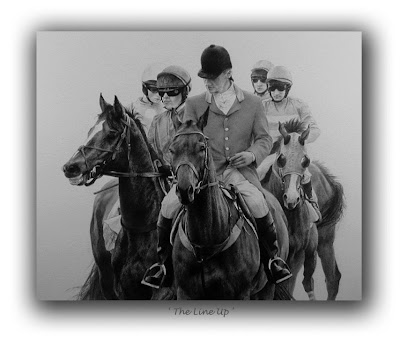 Finished up ten minutes ago, this one is 9" x 11". It will be tagged for a very special show coming up this fall that I shall be doing for the first time. Just the first of several works to be based on material gathered on that wonderful day at the Virginia Gold Cup Races earlier in the month. For someone not known for tackling people in my work, I decided to just jump in and see what the result would be. I'm pleased!
Posted by Terry Miller at 2:22 PM 4 comments:

Have been unable to post the last couple of days but finally can update this morning. I should be finishing up this piece this weekend, maybe even later today, but here is where things were left on Thursday . . . 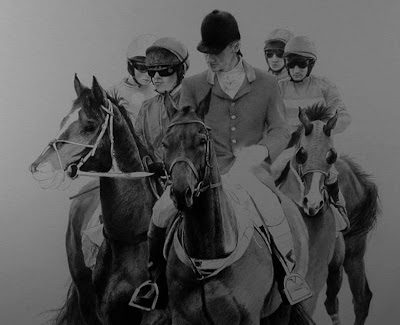 Posted by Terry Miller at 8:31 AM No comments: 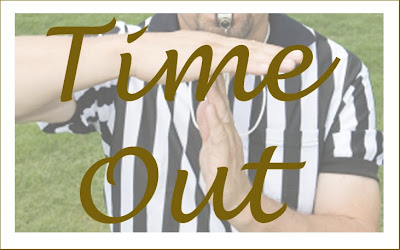 Time Out! Rudely waken before 5 this morning by the resident neighborhood crow family who were just screaming to wake the . . . well, wake the sleeping, my day began way too early. Second cup of tea drained before 6, I wondered if I could accomplish anything as I wondered half asleep here and there. I had decided, since the weather forecast for the remainder of this week was dry and sunny, that I would try and make another run into the National Zoo in DC to get some more reference on the lion cubs that I spent time with a couple months back. The group of seven are now 8 and 9 months old and growing fast, so I thought I needed to get more material before they started getting too big and gangly. Well, I figured since I was at loose ends by 10 this morning to just get the gear and get in the car and head into the Zoo. I was glad I did as I spent about three hours and wound up saving about 475 images, having deleted about an equal number. Thank goodness for digital photography. Anyway, here's a nice little group of images pulled out as I earmarked some for future drawing ideas. No work on the current piece up on the board today, but will return to it manana.
Posted by Terry Miller at 4:21 PM 1 comment:

I got a couple of hours of drawing in yesterday afternoon . . . 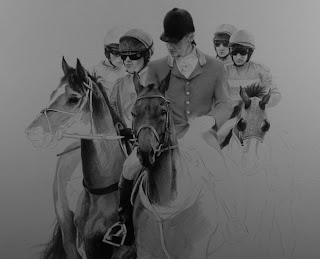 As I sit to work this afternoon, here is what has occurred so far on this piece. It's been a slow go with life intervening. Yard work responsibilities and other demands on my time have left little time for work over the last few days but it's getting there. 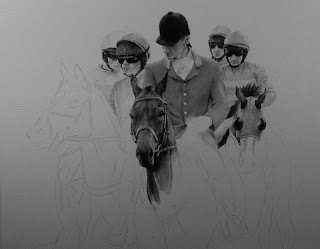 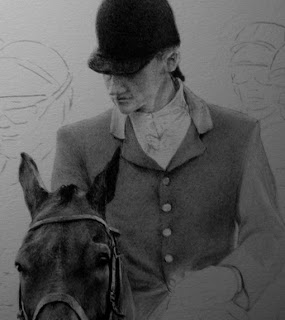 Work time yesterday was devoted to attempting to get the texture of that coat to read correctly. As I have mentioned before in working in black and white, I feel defining variations in texture is key to making a work, work. Developing interesting layers of textures, one upon another, is what, I think, makes for an interesting graphite work and draws a viewer into the work. So with that in mind, I spent the better part of four plus hours yesterday, slowly and methodically layering subtle gray tones with a combination of 5H, 6H, 8H, 9H, 2H, a smidgen of H, a dab of F, cross hatching, circling and softly laying down combinations of all those graphite grades to accomplish a soft, even texture to represent the wool/felt of the coat. Some of those leads were quite pointed, some had rather blunted ends. Using a very soft touch, barely grazing the surface of the Bristol Board I work on, I first established an even, overall undertone as sort of indicated on that right sleeve now. Then, slowly added either softer or harder gradations over that base done in 8H building up layers to indicate the subtle texture of the cloth. All of those marks just caressing the surface so as not to leave any distinct linear appearance. It's a slow, laborious process but one that will, I hope, result in the appropriate texture in the end. Since this large area of the composition is going to be front and center in the finished work, it has to read very strong and so I'm taking my time to make certain that it will carry the importance that it needs to in the finished work.
Posted by Terry Miller at 9:24 AM 1 comment: 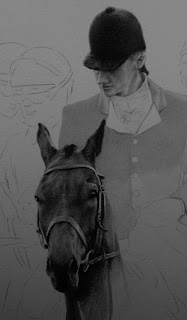 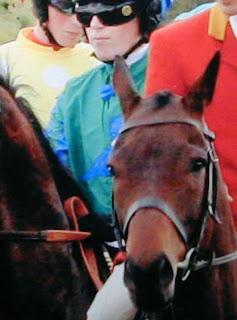 I
see
something
'racey'
in
my
future!
Stay
tuned.

Posted by Terry Miller at 4:41 PM No comments:

As anticipated yesterday and after three hours work today, this work is done. Earmarked for and headed to a special summer show in a couple months, with of all things lighthouses as the theme, this work measures 17" x 7". Considering that many artists do lighthouses and also taking into account the very well known imagery of this particular lighthouse at Pemaquid, I wanted to attempt a work with a slightly different take on the subject. By focusing on the rock formations and the very linear quality of some of the 'sinews' of the various rock types, I hope I have succeeded in coming up with a work that has a bit of an atypical viewpoint and slightly more interest as a work of art. I guess I'll know in July!

At quitting time today, here we are. I expect this one to finish up tomorrow.
Posted by Terry Miller at 4:59 PM 2 comments: 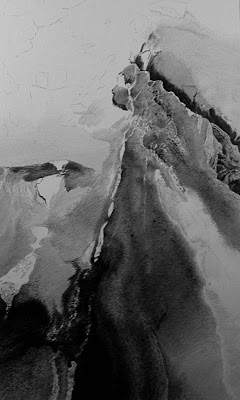 Seems like Blogger was having problems over the last 24 hours so my post from yesterday disappeared. So here, above, is the image of a new work that has been taking shape as it was posted yesterday after a couple of days work on it. Again, as I commented in the original post, I seldom work in this more vertical format of compositional idea. As this work progresses it will become apparent why I have composed this one very vertical.

And here, below, is the work so far today. Pretty rocky stuff! 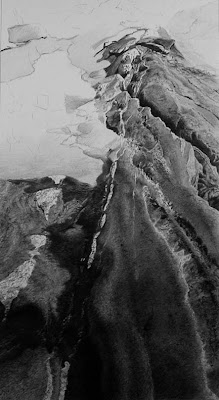 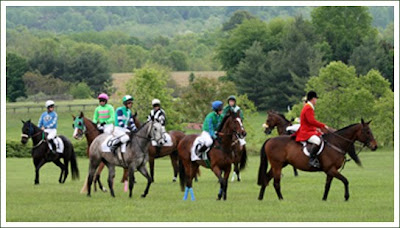 With a wink and a nod toward the Marx Brothers raucous movie, A Day at the Races, I spent a wonderful 6 hours in the heart of 'horse country' in northern Virginia yesterday with three artist friends at the Virginia Gold Cup Races. I'd never been to a hurdles race before and it was indeed a spectacular afternoon. Gathering reference material for upcoming work, we wondered the grounds and found much to be enthralled with. Here are just a few images of the hundreds I shot just to hint at the colorful, intense excitement that surrounded us all afternoon. I won't know quite where to begin in digging into this treasure trove of material, but suffice it to say, there is much here to work from and have no doubt that dozens of new works will spring from this experience.
Posted by Terry Miller at 8:16 AM No comments:

Coming on the heels of the notifications on who got into Birds in Art this year, I read this morning, the good news, that my work Up For the Challenge has been selected for this year's edition of the Society of Animal Artists annual member's exhibition opening in Michigan this fall. Needless to say, this is quite a nice way to be ending the first week in May!
Posted by Terry Miller at 6:41 AM 5 comments: 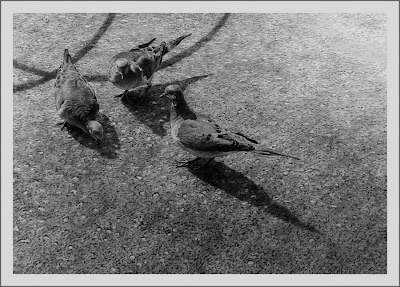 If it's the first week in May, it's jury time for the internationally acclaimed annual exhibition, Birds in Art. With a flurry of postings this morning on Facebook, word has been sent out today on those lucky enough to have made the cut this year. I am quite pleased to report that my work, Intimate Circles, will be included this year, my 20th year of making the cut! Thanks to the jurors and the Woodson Art Museum for making this Friday morning a very special one for many artists, including yours truly!
Posted by Terry Miller at 8:57 AM 2 comments: 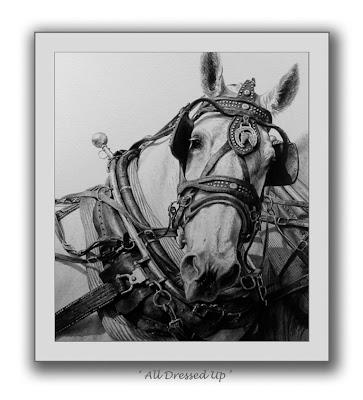 As it is drizzly and chilly and plain old yucky outside today, I could not do the outdoor things I wanted to so, instead, I sat down to the drawing board and completed this work in the last couple hours. Image on this one is a touch under 8" x 7". It is earmarked for this fall's Western Visions Miniatures and More at the National Museum of Wildlife Art in Jackson, WY.
Posted by Terry Miller at 1:38 PM 3 comments: