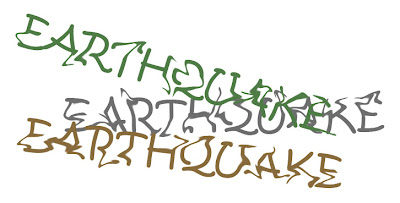 It was a dark and stormy night . . . Ah, no . . . it was a warm and steamy night, sultry to the touch. The night creatures were chirping, serenading each other. He had opened the upstairs windows before calling it a night; ceiling fan was whirring away above his bed and, for the most part, he was comfortably asleep.

Somewhere around quarter past four, he became aware that he was awake, looking over at the bedside clock. Not sure what had awaken him, he listened to the night sounds for a bit, trying to go back to sleep. It wasn't working. But then he must have momentarily drifted back to sleep only to wake again, roll over and spy the clock once again to note the time to be a bit before five. The birds would start their morning songs soon, he thought, and then it would be even harder to get back to sleep.

So there he lay, listening to the soft whir of the fan blades as they cut through the air above him, his eyes slowly beginning to close. Suddenly, there came a sound, a strange middle of the night sound that immediately brought him to full wakefulness. The sound seemed to be accompanied by movement and he was instantly thinking, 'I must be asleep and dreaming or . . . this is an earthquake'!

There had been only one other time in his life when he had felt a similar feeling, sensed a similar anxiety, and that was when he was vacationing in San Francisco maybe forty years earlier. On that particular morning, waking from a good night's sleep in the Saint Francis Hotel in downtown, listening to the clickity clack of the cable cars coming and going five stories below his open window, he suddenly felt his bed move and things began to shutter and shake in the room around him. It lasted only a moment, but he knew, he knew he had experienced his first earthquake. And where better to have that first experience but in the town most famous for it's quakes!

So, here he was all those years later, experiencing the same internal, momentary anxiety, as the roar, now very apparently coming from the ground beneath his neat little brick house grew louder as it seemed to travel underground, shaking everything in his house. He thought it was going to go on and on, but it must have only lasted a few seconds, as the roar intensified as it passed beneath him and he could hear it diminish as it moved further on, further down his neighborhood street and toward the direction of the nation's Capital.

He lay there, wondering if he had actually really just experienced what he thought he had just experienced. Or, was it all a dream? It was more than an hour before he must have fallen back to sleep, an hour in which all sorts of thoughts ran through his head . . . 'would there be more shocks? . . . what about the gas lines? . . . would he wake in the morning and read about a city in ruins'?

Finally, he must have drifted off again as when he finally opened his eyes, focusing on the digital read out of his bedside clock, it was about a quarter to nine. He went downstairs into the kitchen, after first hitting the 'on' button for his computer, and started to boil water for his first cup of morning tea. A bagel popped up in the toaster, he neatly spread each half with cream cheese, filled his mug with hot water, swirling the tea bag to begin the infusion and headed for his computer screen.

And, there it was . . . news all about the early morning quake that had been centered in a town not fifteen miles from his neat little neighborhood on the outskirts of Washington DC. The news said it 'hit' at 5:04, he nodded his head; the news said there was little damage but for shaken psyches, he nodded his head. 'Wow!', he thought . . . he had just experienced his second earthquake, this one occurring in a place where he never would have assumed he would have experienced it! 'Pretty cool', he thought, as he sipped his tea, starting his day just as he had started the day before and how he would start his day again the day after, but with thoughts and memories of that morning back at the Saint Francis Hotel many years before.