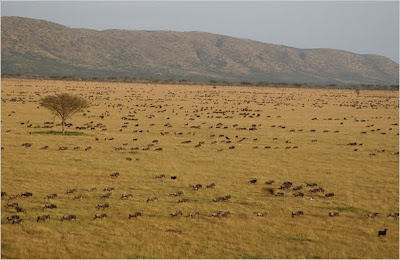 I was pleased to read this morning that the New York Times has picked up on the story of the proposed Serengeti road mess. Well written, well researched and well worth a read. In one of the comments listed beneath the article, the point was raised as to the belief that Tanzania itself cannot possibly have the financial wherewithal to foot the bill for this project. I totally agree. There is an alternate route south of the park lands which in reality would benefit far more people, be less expensive to construct, and be a much less destructive influence on the park and its wildlife. One has to wonder, then, who might be pushing this from afar? What external influences might be in command here? Why, after so many years of blocking this project, is the Tanzanian Parks Authority now giving in? When will the truth about this come to light? How might you get involved and voice your concern? Go here and read more about this and then sign the petition.

I have also been heartened to read that the African Wildlife Foundation, which I support strongly in their efforts across the extent of the African continent, is in opposition to this undertaking with strong urging to the Tanzanian government to consider the alternatives to bisecting the northern park lands. With such a global outcry, it is hard to believe that alternatives could not possibly be considered by those in power to reverse this unwise decision.
Posted by Terry Miller at 9:30 AM