Where Did Those Circles Come From?

Here is the new work, completed twenty minutes ago. This one measures 9" x 13". 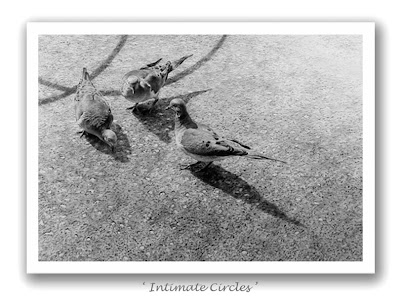 At the last posting, I was asked to explain the use of and placement of the circles in the upper left corner. OK, here goes - First, take a look at this image, doctored up in good old Photo Shop, showing the work without the circles. The only thing I have done here is to clone out the circles, I did not modify or adjust the image in any other way. So, now take a look here and also look above at the work as completed. 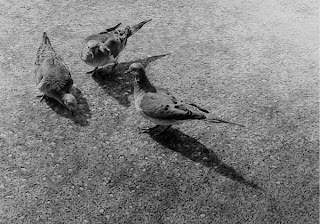 Now, try and keep your focus on the image as adjusted, just above here. As I harp about frequently, a well balanced composition with strong and appropriate positioning of subject matter is of great importance to me as an artist. I do a great deal of preliminary work in placement of objects, redefining the boundaries of the image, considering both positive and negative spaces and making sure, before I begin work on the actual drawing, that all works, is balanced, presents a pleasing overall design and makes sense.
Even though my preliminary ideas are simple line sketches which sometimes include some indication of shadowing and texture, I can tell a lot just by looking at the image say, the morning after I have sketched out what I think will be the final composition. Usually, if there is need to adjust or rethink, it will become apparent to me at that time, when I am looking at it with a fresh, rested eye.
In this instance with this basic composition, simple in form, with little actually going on except for the textures, shadows and positioning of the three birds, I was concerned with working up a rather abstract group of shapes in an interesting arrangement. With only the body of the birds and their shadows to work with, defining an interesting movement with their body poses and knowing that I wanted to repeat to some extent the heavy texture of the surface upon which they were standing, I knew I was going to be left with a great deal of negative space. Once I had accepted where the three birds were going to be positioned within the boundaries set for the compositional area, I had to make sure things would be balanced.
After giving myself some room, and allowing my eye to see the idea in sketch form after 'sleeping' on it, I was a bit concerned that the long, pointy, downward thrusting shadow of the foreground bird was going to play too important a roll in the final drawing and might actually tend to move the viewer's eye right out of the image in the bottom right corner. I could have resolved this possible issue by moving the little circle of birds closer to the upper left border, thus giving more space between the pointed end of that foreground bird's shadow and the lower right corner, but after thought and actually using four lengths of scrap mat board to redefine the edges of the compositional area, I did not like what I was seeing.
And so, it came to me that I needed to add some sort of weight to the upper left of the work. This I could have done by darkening in the textural aspect of the pavement at that corner, but I decided that would not work as it would have added too much weight. I then thought of some rough, sketchy indications of shadows of leaves and branches as if from an overhanging tree in that upper left section, but decided that would be too much of a conflict with the detail of the birds.
After a bit more thought and playing around with sketchy ideas, I fell upon a simple set of lines of some sort, abstract in form, yet suitable for adding the weight that I thought I needed. In short order, I came up with the two overlapping circles . . . shadows of something, but not strong enough to be too weighty or too much of a conflict with the detail in the feathers of the doves. It seemed the absolute perfect resolution to my 'problem' and added just enough additional interest to the upper part of the work to counteract the thrust of that long, pointed shadow moving in the opposite direction.
The image without the circles is OK, but I did not want the work to be . . . just OK. I wanted the balance to work as perfectly as it could and I think, in the end, my decision has made this a much more interesting work with the addition of those two simple, five minutes worth of drawing, circles. They not only add the weight that I wanted added, but I think they add just a bit of mystery and also help to really meld that little 'circle' of birds together as a single unit as opposed to three individual units.
So, there you have it. My reasons for doing what I did. You are certainly welcome to come to your own conclusions as to whether you think I succeeded or not!
Posted by Terry Miller at 2:25 PM

i think the design elements work very well in this piece...really like it!

Great explanantion Terry, thanks for sharing your thoughts on the composition. Great work, as usual.

Thanks for that careful explanation Terry. I really appreciate you taking the time. The semi-circles work perfectly, as your photoshopped image shows. The balance of the drawing is completely changed with those shadows. It's a brilliant solution because it doesn't detract form the birds at all.

Beautiful Terry! Thanks for all of the commentary. You are one dedicated noodler. That pavement would scare me and I've been known to noodle.

It was absolutely the perfect solution to your"problem" and worked fabulously!! Thanks for showing the image without the shadow circles, it really showed how huge of a difference something so subtle can affect a final drawing. I really love this one!

It's interesting to hear your thought process Terry. I usually work just the opposite - I anticipate the need for adjustments, but hold off on adding them until I've finished the main piece of work. I think it's really interesting to hear that you incorporate them into the composition before you put pencil to paper. It sounds like you have the finished drawing in your minds eye as you are creating it. I will often change direction and actually surprise myself at how different my end product is from my original concepts. Your drawing is gorgeous.

How supremely creative. Because of those circles, the birds appear even more grounded. And, it adds a subtle story, (what are the circles?), yet keeps your eyes on the birds. You continue to amaze me. Brilliant work.