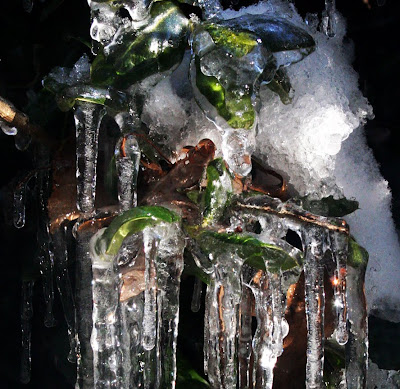 Nature's beauty outside my dining room window this afternoon. Looks like we got a tad over 4" of snow yesterday, not a blizzard and not a lot to shovel out this morning, but nevertheless stark and white and wintry today! 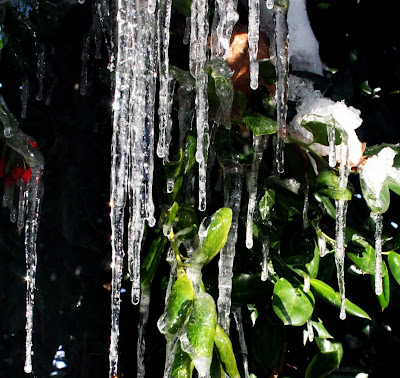 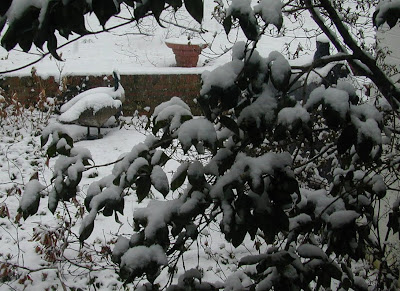 And it's just beginning. It will be interesting to see how much at the end of the day. It's a fine day to be sitting inside at the drawing board. I have a new work up and ready to go now. This one with an eye toward an upcoming show at Mystic Seaport at the Maritime Gallery there. Posting of the first stages tomorrow or the next day. Interesting main subject in this one. 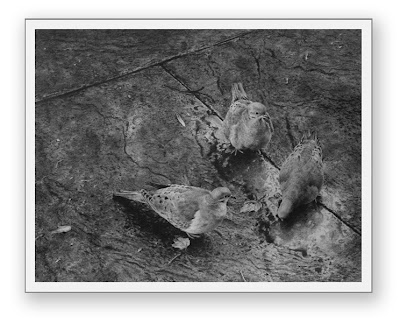 Yesterday was a perfect day to be working on this piece as it drizzled all day long and I took advantage of it and made notations and observations out my kitchen window of the reflective nature of the flagstone on the patio. Of course this is the seed of the original reference material and inspiration for this work, a rainy day several weeks ago and its effect on the patio stones. Well, at any rate, the going will slow down now as I concentrate more on the soft nature of the birds. As I have been looking at this piece over the last three or four days, I am just slightly concerned that the textures might be a bit in contention with each other so will carefully monitor this aspect as I continue to work. It might be that once the birds are set, a softening of the stone work might be necessary. I am not going to commit to anything right now, as this is all going to need to jell a bit more before that sort of determination is made, but it is a thought now in the back of my mind. What I don't want when it is all said and done, is for there to be a hodge podge of textures all working against each other rather than working in consort. If this indeed does become one of my finals for entry into this year's Birs in Art exhibiton, I want all my ducks in a row for jury! 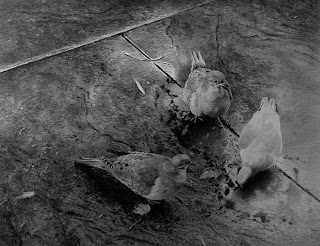 Things are beginning to get a bit feathery now. The last four and a half hours of work on this piece . . . 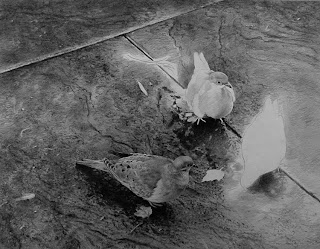 Have not posted progress on this one in the last few days as life, business dealings and such, got in the way. I did manage a few hours here and there and somewhere, so did get something done on it. Back at the drawing board today. Would like to finish this one up by the middle of next week. 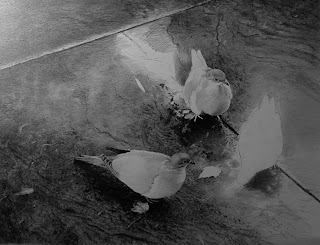 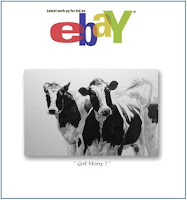 This current little work posted to ebay will close bids tomorrow evening, so if you would like to try your hand at it, click here and Good Luck!
Posted by Terry Miller at 10:17 AM 1 comment: 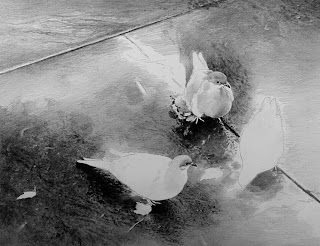 I'm about 15/16 hours into this one now and before today's studio work begins, I am posting the results so far. What should be obvious and apparent so far is that I am concentrating on the wet stone and noodling all that important texture. As the 'background' of this piece is going to be the all important make or break aspect of this work, not to diminish the doves which have their own importance, but no matter how well the birds are delineated, in the end, the wet aspect and reflective nature of the stone work is what is going to define this piece. And even though this work will be a consideration for one of my entries for this year's Birds in Art exhibition, I need to get all that negative space stone work down right. Since this is my first real effort at tackling this sort of textural idea, I am spending overtime on that aspect of this piece. The feather detail on the birds will be a piece of cake compared to the rest of it!

About nine and a half hours into this one . . . 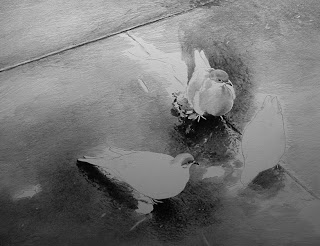 (Studio music today .... Grieg Piano Concerto, the first real piece of classical music that I went nutty over 40 plus years ago (Rubinstein, naturally!); more Grieg, his Lyric Pieces and various piano works; and later on, Mahler #1, the Titan! Rather fitting music to draw 'in the rain' to.)
Posted by Terry Miller at 11:30 AM No comments: 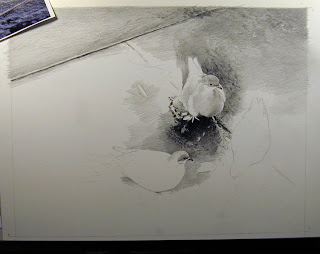 Here's the first five hours of the new work on the board. I'm getting a late start on work time today, but since the studio is rather Jazzy today (listening to Oscar Peterson and the Brad Mehldau Trio) I expect to be rockin' in short order. As I indicated yesterday, lots of wet pavement in this one!
Posted by Terry Miller at 2:38 PM 1 comment: 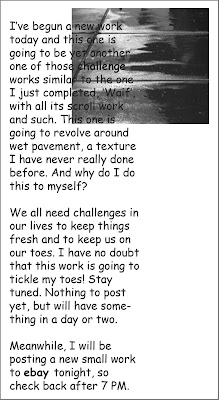 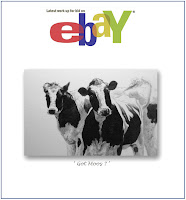 Here is the next work up for bid on ebay.
Click here to place a bid. Good Luck!
Posted by Terry Miller at 2:04 PM No comments: 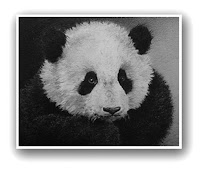 The bidding on this little fellow closes tonight on ebay so if you would like to place a bid, hit the link in Monday's posting, below. I'll be posting another small work this weekend, so check back on Sunday.

Here's a sneak peek at the little work that is currently up for bidding on ebay. Click here to see the entire image and to place a bid on this new, little work! This one runs through Friday night, so get your bid in and Good Luck!
Posted by Terry Miller at 8:47 AM No comments: 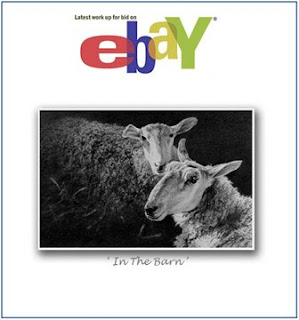 Just a reminder today that this little work up for bid on ebay closes tomorrow evening. If you would like to place a bid on it, there is a link in Wednesday's posting below.
_____________________________
As I settle in to work in the studio today, I wanted to add this little bit of information. I have noticed recently and over the last six or seven months on many of the blog pages of other artists that I frequently look in on, that some of them have been posting notations about the music they have been listening to while they work. Long time readers of this blog will recall that from time to time in the past, I have referred to composers who I listen to frequently or specific pieces of music that often tend to inspire me as I work. Well, I thought it would be fun to post the music that I have just installed on my five disc player that will act as my accompaniment over the next several hours as I get going at the drawing board today. So, here is this afternoon's line up -
A nice selection of the orchestral versions of Ernesto Lecuona's delightful latin flavored works including Danzas Afro-cubanos from a disc called Lecuona Sinfonica; a nice assemblage of more latin impressions by various composers including two of my favorite works, Huapango by Jose Pablo Moncayo and the El Trenecito (the little train of the Caipira) movement from Villa-Lobos's Bachiana Brasileira No. 2; and several works on a disc of the music of Gustav Holst including his Cotswolds Symphony and The Hampshire Suite. A rather diverse collection today! And now, to work.
Posted by Terry Miller at 11:29 AM 1 comment:

A burst of work hours yesterday and then another couple of finish up hours today has this piece ready for mat and frame. Image size 10" x 14". And of course, the little surprise is finally revealed. 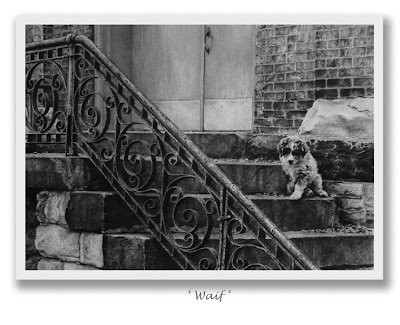 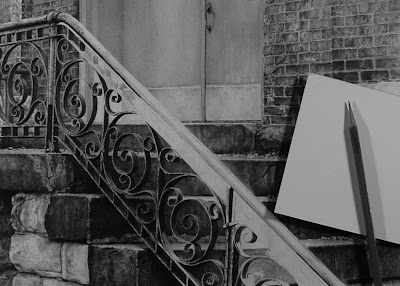 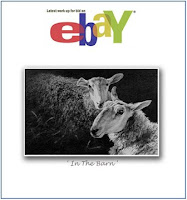 And if you would like to place a bid on this latest little work posted to ebay last night, then click here.
Posted by Terry Miller at 4:15 PM 1 comment:

Before studio time begins today, wanted to post where I am on this one so far. Sorry for the flare in the upper left corner . . . lamp was too close. I will also be posting to ebay this evening, so check back somewhere after 7 PM to see what is up next for bidding. I expect this one to be completed by the weekend. 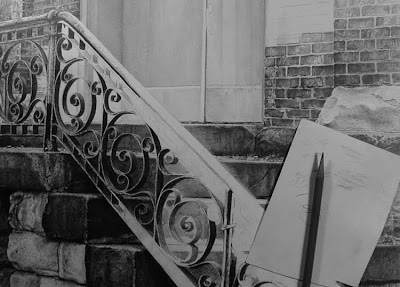 As noted earlier today, I have just listed a new work on ebay. If you would like to place a bid on 'In The Barn' , you'll have to click here to see the work and place your bid. Good luck!

I'll be posting new work to ebay for bid tomorrow evening, so check back then. I am still at work on the current piece and will post an update tomorrow as well.
Posted by Terry Miller at 2:43 PM No comments:

Back at it now and the masonry begins to take shape. 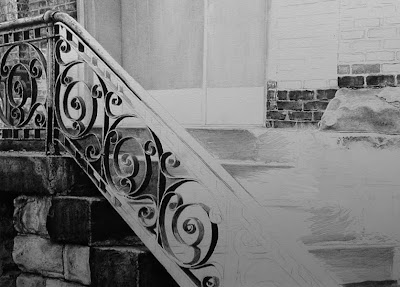 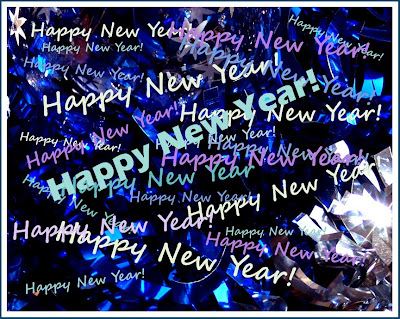