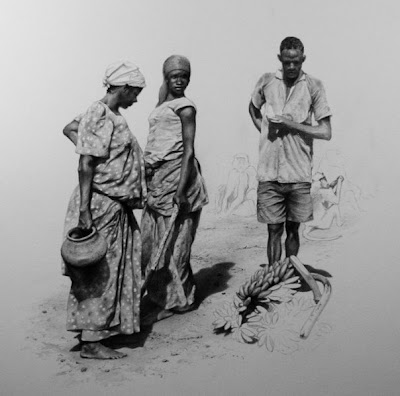 Yeah, I know . . . doesn't look like an awful lot of work today but lots of little stuff today - feet, bananas, dirt, fuzz, tin cans. OK, well no tin cans, but picky things going on today and quite a bit of distractions as well, so only a couple hours of drawing time. I think both woman are pretty much done now and maybe another half hour/45 minutes to go on the guy.
As to my note yesterday about making a change in the composition, both commenters yesterday were right on target. After I had worked on the piece for the last five/six days, it became increasingly apparent to me that there really did not seem to be a 'connection point' between the viewer and what was going on in the piece. In my original sketch, I had indeed positioned the more central background baboon walking from behind the guy to the left, figuring it would make a nice connector between the two groupings of subjects and maybe add to the Circular compositional design of the piece.
As happens on occasion, I goofed. Sure there was circular movement going on, but my eye was finding it hard to land on one point when 'entering' the image and then to move through it easily. It needed more of an Eye to Eye compositional point to have the viewer's eye land upon it and then move easily around the various elements of the overall design. I believe, now, that I have accomplished that by changing the position of that one baboon to look directly out at the viewer, thus bringing your eye right to that center point of the overall image and making that all important connection between the image and the viewer. As I have mentioned before in these posts, Eye to Eye compositional design is one of seven basic composition forms that never fails to, pardon the pun, draw attention where you want attention to be drawn. In this case, smack dab in the middle of the action.
Posted by Terry Miller at 4:45 PM

Thanks for that explanation Terry. I can see what a difference it really makes. There's a lovely graceful feel to this piece, and it makes me want to imagine the story behind it.