Time out for Andrew 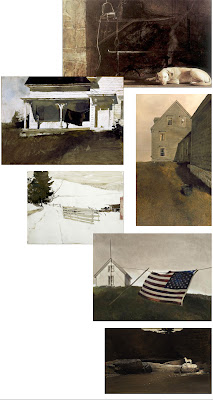 Like Tchaikovsky before him, with his 1812 Overture, and Ravel with his Bolero, Wyeth may be best known for his Christina's World, a work MOMA purchased soon after its completion back in the 1940s and perhaps today, still has difficulty placing within the context of all that POP and OP and mid Twentieth Century splash and glitz of Pollack, Warhol and the like.

But, just as the Romantic Russian and the Feisty Frenchman before him, Wyeth has, I feel, so much more that stands to eclipse the popularity of a single work; a single work that has, over time, become an icon of the popular culture . . . a melody that everyone hums or hears in the background on the elevator ride . . . or an image that is so impressed in people's minds as to become trite, banal and overwrought with commercial abuse, even when, I again feel, those singular melodies and images contain glorious notes, beauty and depth of creative soul.

I love Tchaikovsky. His 4th and 6th Symphonies never fail to elicit deep emotion within me; the Serenade for Strings does the same. I once attended a concert of the Atlanta Symphony, a very special evening when, I believe it was Andre Watts, played all three of the piano concerti back to back to back, knocking the socks off everyone in the hall! I still get shivers when I hear the first several notes of the First Piano Concerto and no matter how many times I listen to it, no matter who the pianist, no matter what the orchestra, the music always has the same emotional effect on me.

OK, some say Tchaikovsky's music is saccharin and overly sentimental. Fine, all are entitled to their opinion. But, his music 'works' for and 'speaks' to me and along with that of many other composers, like Ravel, encourages all sorts of creativity as I sit at my drawing board.

Art-wise, as I have said in many previous posts on this blog, there are many artists, genres and periods of art that have influenced me, Wyeth not least on the list. His compositional approach never fails to excite me. His spare and dramatic renderings of subject matter appeal to my personal sense of design and focus. His use of light and shadow and intensity of focus have always spurred me on to try new approaches in my art and, where some might see sentimentality in his work, I see an earnest portrayal of . . . Andrew's world.
Posted by Terry Miller at 2:07 PM