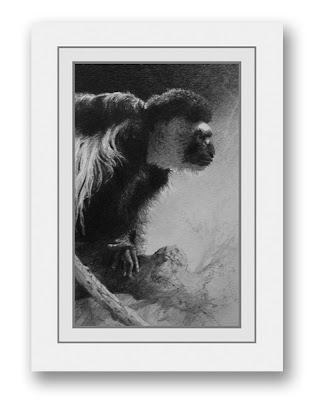 . . . a portrait of one of the colobus monkeys at the Philadelphia Zoo from my trip north a couple weeks ago. Now, I had seen colobus when in Tanzania in the area around Arusha Park, but they were pretty flighty and did not hang around much so trying to photograph them was not the greatest. I did manage to get about a dozen shots that were 'acceptable' on that trip and have referred to them in the past, but to be able to get up close and rather personal with the group in Philly, well that was a real treat . . . one that I think will have to be repeated next spring.

This one is going to the Watefowl Festival in just over two weeks. My, time is flying now! I have a lot left to do in the next 14 days.
Posted by Terry Miller at 11:53 AM

like this one a lot Terry,you have managed to creat great atmosphere into the drawing. Grahame

That's gorgeous! I just tripped over your blog and am very curious now about your work!