Was it Just a Week Ago? 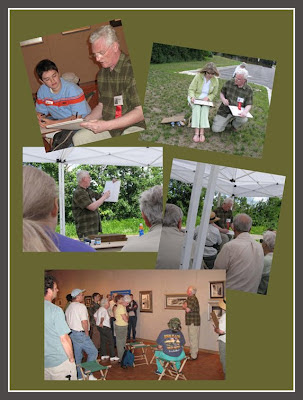 One week ago, at just about this time of late morning, I was along the Wisconsin River in downtown Wausau, Wisconsin, watching some storm clouds move toward the city from the west. Toward the end of the morning session of the drawing workshop that I was hosting, we decided to break down the tents and move everything back to the museum for the afternoon session. Good thing we did, as at just about the moment when everything had been loaded into the van, raindrops began to fall. Our timing could not have been better.

In any event, thanks to Maryland friends, Brenda and Don, who flew up to Wausau to enjoy the weekend events and who also lent works back to the exhibition, here are some shots they took over the course of the day, last Saturday.

As I mentioned in an earlier posting about last weekend, I enjoyed working with the thirty people who had signed on for the workshop and hope some of what I tried to impart a week ago, has stuck! It was difficult to get around to everyone at some point, to give encouragement and to make suggestions about refining their sketches, but I think, in the end, I was able to speak with each individual at least once or twice and discovered quite a few talented participants who ranged in age from teen years through ... well let's just say more mature years!
Posted by Terry Miller at 11:24 AM