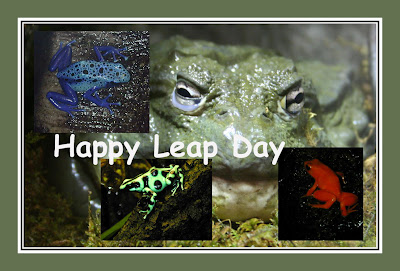 And, Happy Birthday to all who are lucky enough to only have to celebrate it every four years (including Gioachino Rossini). A montage of some froggy shots taken at the Baltimore Aquarium a couple years ago.
Posted by Terry Miller at 3:45 PM No comments:

Ok, time for composition lesson 101, part 2 . . . I like working in this more horizontal format, as may have been detected from observing, I would say, about 65% of the rest of my work . . . and trying to work out pleasing and well balanced compostions within that boundry. In this work, I have decided to emphasize the side to side movement of what is going on in the composition by first, bunching up the boats on the right hand side of the work, with the majority of the 'busy' stuff occuring to the right of the center line, (the dark areas of the windows in the middle boat, the tangle of chains and ropes on the bow of the foreground boat, the mid tone shadows falling across the boat house of the central boat, and especially the name, Tina) this being balanced by the directional thrust of the bows of the three boats moving from right to left, counteracting the 'heaviness' of the busy stuff on the right. By adding in the flying heron left of the center line and just positioning it near where other 'heavy' and darker areas of the two rearmost boats are, this stuff going on at the bows of both, the heron acts as a nice secondary subject point while not diminishing the strength of the right side of the work, where I hope, the viewers eye is going to move first when all is said and done. And even though the heron is moving right to left, as in the direction of the boats, it does not, I hope, pull the viewer out of the left margin of the work as it is placed close enough to the center line and made 'distant' by fainter lighting and positioning it behind the boats so as to de-emphasize it. The small area of water and marshes on the extreme left side also acts as a balance to all the white of the right side of the center line and thus giving an equal weight to both sides of the center line.

Class dismissed!
Posted by Terry Miller at 10:38 AM 1 comment:

A new work up and running on the drawing board. This one will also be heading to Connecticut next month for the Modern Marine Masters show at the Mystic Seaport Gallery.
Posted by Terry Miller at 12:14 PM No comments: 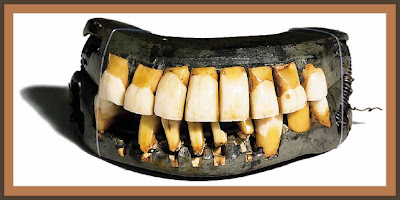 Posted by Terry Miller at 11:41 AM No comments:

One of those nice, sunny, mid-winter days here today and I took advantage and spent some time at the kitchen window, photographing the passing parade of birds at the feeders. I love mourning doves, as long time readers here will no doubt realize from how often I use them as subjects in my work! I just love their interesting feather dots and their nice, plump body shape . . . fun to draw. Posted by Terry Miller at 4:05 PM No comments: 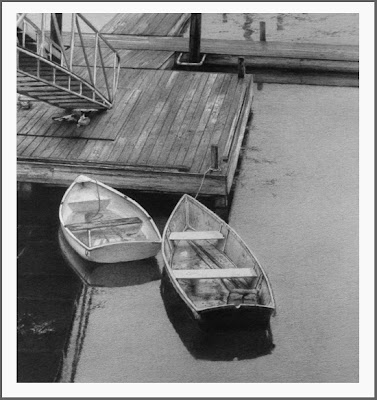 The new work, completed; image size is 9 3/4" x 9" and it will be on its way to the Mystic Seaport Gallery in Connecticut next month for an April opening of their exhibition, Modern Marine Masters.
Posted by Terry Miller at 2:39 PM No comments:

Continuing on yesterday's theme of positive and negative, here is the work thus far. A bit more definition and delineation on the dock and additional elements of the positive aspect of the work are helping to draw the eye into and around the work. The flatness of the water, even considering the bit of reflection in the upper right, acts as a 'foil' or backdrop for everything else that is going on in the work, forcing, I hope, the viewer's eye to stay with the movement of the other elements; the boats leading up to the dock, the lines of the planks and the angle of the stair element and its shadow, leading you to the prime subject. Enough parssing for today! 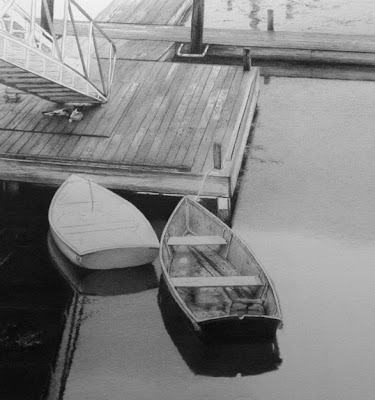 Posted by Terry Miller at 2:32 PM No comments:

Before time at the drawing board begins for today, I wanted to post what work took place over the weekend. With other things going on, not an awful lot of studio time was had, but enough to have defined a couple of the major subjects of the work and to play a bit with the 'positive and negative spaces' in the work.

When working out a compositional idea, the postive and negative should be taken into consideration so as to finish up with a pleasing, well balanced work that will be interesting, move the viewers eye around the work, and use the space defined by the height and width of the image plain to its best.

In this particular work, I am trying to define some interesting abstract forms, three dimensional shapes and elements of the composition, to lay against a soft, almost flat, even background. The various plains of dock surfaces pretty much define the 'positive' aspects of this work, including the triangular shapes of the two boats and the real central focus of the work, the little kitty resting in the shadow. The dark reflection to the left also links to the primary positive forms of the dock to further define a rich, stong positive space in relation to what will become a pretty soft, even tonal value of the almost still water, as the work progresses.

Shifting further, the angle of all the subject elements off of a true 90 degree format to the block of the image itself, I hope, will further intensify the interest level of the completed work. Of course, that remains to be seen, but at least the intention is there!

And, one more note . . . the placement of the kitty, at the intersection of where all the angled lines seem to cross the perpendicular lines of the dock surfaces, was a given; there really could not be any other spot for that primary subject to 'sit'! 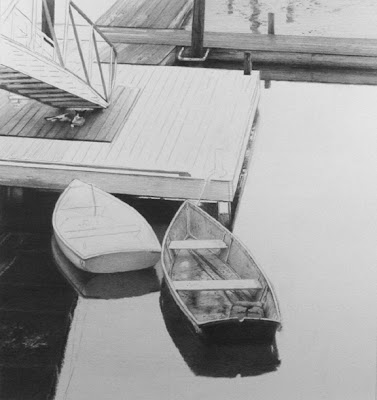 Next up on the drawing board is the first of several works that will go to Mystic, Connecticut for an April opening of the Modern Marine Masters exhibition and sale at the Maritime Gallery at the Seaport Museum. 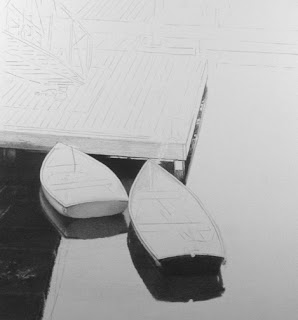 Those who are astute observers of this blog, and those who pay attention to these sorts of things, might have noticed some recent additions to the links list here. I have just added a link to a new blog page I have opened regarding my summer exhibition with the Woodson Museum. Unknown Bridges, will show over the next couple of months, all of the works that will be included in the upcoming exhbition. I decided to do this so the entire body of work would be available to be seen on its own, without 'interruption' from other works!

You might also have noticed links to several new artist pages, among them, Adele Earnshaw, Johnny Mullane and Victoria Wilson-Schultz. Adele is a long time friend and an artist whose work I have respected and admired for many years. She has, just within the last year or so, started to paint in oil from her previous years as a watercolorist and I am delighted that she has joined the ranks of we artist bloggers.

Johnny Mullane is also an artist whose work I respect very much and I actually have a piece of his in my small, personal collection (as do I have several of Adele's as well). His figurative work is simply sublime! Check it out.

And then there is Victoria Wilson-Schultz. I've know her work for quite a few years also and am pleased to say that she is represented in my personal collection as well. Her pastel work is wonderful!

I am so glad to see more and more of my fellow artist friends starting to blog as it is a way for me to see what they are doing when I don't get to see them in person but maybe once a year. And it also gives others a chance to see some really wonderful work.
Posted by Terry Miller at 2:14 PM 3 comments: 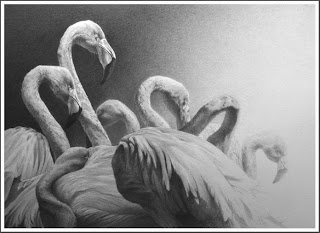 Posted by Terry Miller at 12:28 PM No comments: 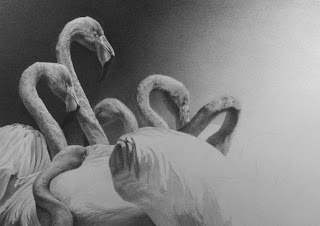 Posted by Terry Miller at 3:07 PM No comments: 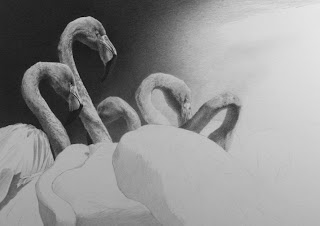 Something new started on the board yesterday. This one is aimed at repro on the invitation to a gallery show I will be a part of in late May.
Posted by Terry Miller at 11:39 AM No comments: 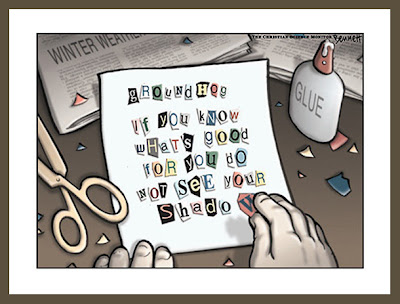