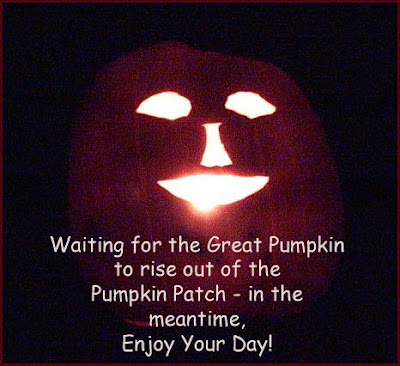 Posted by Terry Miller at 9:26 AM No comments:

A little work (image just over 4" x 5") recently off the drawing board and headed to the Waterfowl Festival in Easton, Maryland with me in about ten days time. 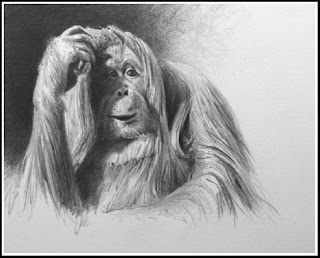 Posted by Terry Miller at 1:00 PM No comments: 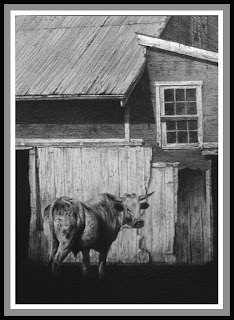 
The Gilcrease Museum in Tulsa, Oklahoma will again, this year, host this wonderful event as a fund raiser. Over 220 artists from all across the country and Canada have offered small scale works, including yours truly. There will be a silent auction drawing on Thursday, November 1 at the museum and those works not sold at this event will continue to be available through the museum until November 18. You may preview all the works available by clicking on the link below. There are instructions also on the museum site as to how to go about putting in a bid for a work, so look carefully!

Posted by Terry Miller at 3:59 PM No comments: 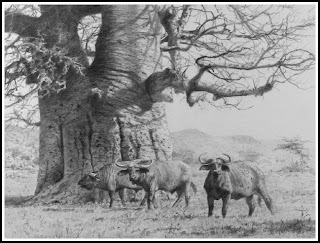 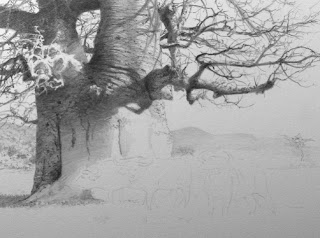 As promised, I return today to Africa; this work being based upon reference from a March, 2000 trip to northern Tanzania. Once again I feature the marvelous baobab tree as the main 'topic' of this work. While spending time in Tarangire Park, one of if not the most eastern of the National Parks of Tanzania, baobabs abounded. Lake Manyara Park just west of Tarangire also hosts many old and beautifully sculpted baobabs and I sought additional reference material from my very first trip into eastern Africa back in the early 1970s and time spent at Manyara. 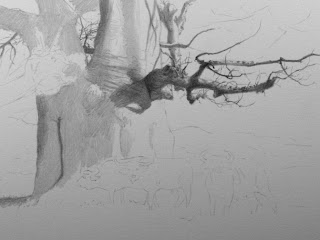 Posted by Terry Miller at 3:08 PM No comments: 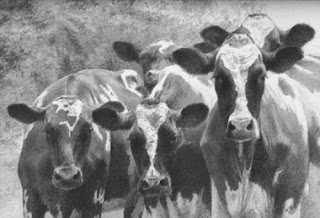 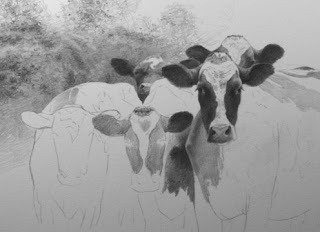 A slight departure from the continent of Africa today with the beginning of a new work. Of course, these could be African cows! I promise I will be back on that far off continent once this work is completed this coming week. Serengeti, I shall return.
Posted by Terry Miller at 5:23 PM No comments: 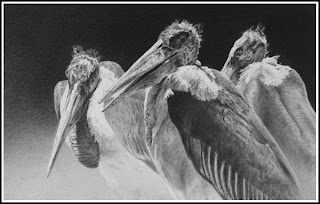 Let me digress a bit today from the 'normal' course of postings to be able to join thousands of others from all across the globe who will be posting today in honor of 'Blog Action Day', a day to offer support, concern and personal thoughts on the environment.

Being an artist whose thrust is, at least 80% of the time I would say, portraying the natural world and its inhabitants, I have long been someone with concerns about the world around me. These concerns have often played themselves out in my work in hopes that others might feel the same concerns for our surroundings and those animals that have, often, been forced to struggle for life and living space in competition with the ever increasing sprawl of the human animal.

I feel great joy when others often times will find the subtext if you will, of a given work of mine and zero in on the idea behind the composition. I don't often have an 'agenda' very specifically spelled out in a work, but frequently, as a result I may assume from all my years of being a supporter of environmental concerns, ideas and thoughts about nature and its struggle to survive in our ever complicated world just seem to work their way into a composition without my being consciously aware of it.

The continent of Africa and the struggles there between the ever increasing populations all around that continent and the native populations of animals, has been a major focus of my work ever since my first trip there in the early 1970s. Over six subsequent returns to Africa in the following thirty years, I saw first hand, much of the spread of population centers and the clearing of formerly uninhabited areas for agricultural purposes, forcing the elephants and zebra and carnivores to 'make do' if you will, with ever narrowing circles of habitat. As positive an undertaking of setting aside large areas of land for the sole living space of wild animals has been in many of the countries of East and South Africa, conflicts have inevitably arisen, especially in the last twenty years or so.

By reconnecting with my African memories in this last week or so and embarking on a series of works based upon my times on that very special soil, I hope to be able to present a number of pieces, next month at the Waterfowl Festival and in several of my galleries that will be doing special showings in November, which will in some way reach out to others and perhaps touch someone in some way that will be reflected in their desire to become involved, in whatever small way they might, in support of and concern for the animals of this planet that have fallen under the blanket of our protection for future generations.

With the recent honor of my being named one of the African Wildlife Foundation's 'Artists for Africa' and the very kind and positive article that appeared in the spring 2007 edition of Africa Geographic magazine (as noted and discussed in an earlier posting here on this blog) I have decided that I will donate a portion of my proceeds from the sale of these African works that will be completed over the next three or four weeks to the causes that AWF fights for. I would urge any of the readers of this blog and specifically this posting on 'Blog Action Day', to take a look at the Foundation's web site (www.awf.org) and see what fine work they are involved in and, if of a mind to, make a donation on this very important day. When large groups of people work together toward a single purpose, things happen!
Posted by Terry Miller at 11:28 AM No comments:

Got an early start this morning after a late night of work last night. So, here is the piece at its current stage. I am enjoying this one. I think these 'guys' are cool! 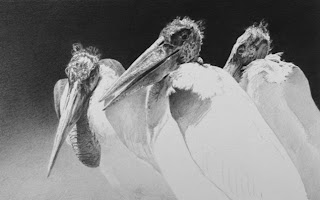 Posted by Terry Miller at 12:48 PM No comments:

The start of a new work with some very interesting subjects . . . 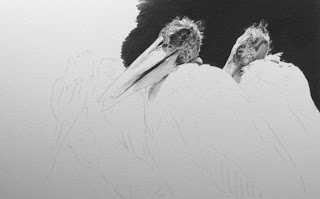 Posted by Terry Miller at 2:55 PM No comments: 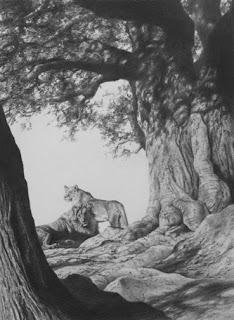 Posted by Terry Miller at 4:16 PM No comments:

After beginning this work and after noting, as I did yesterday, the joy which I felt in starting an African subject matter work, I burned some of the 'midnight oil' last night and spent a couple hours at the drawing board. I actaully am somewhat surprised at how quickly I have become involved in this one and it does my heart good, for any number of reasons right now, not least of which being it just feels so good to be dealing with African subjects again. My heart needed this focus right now. 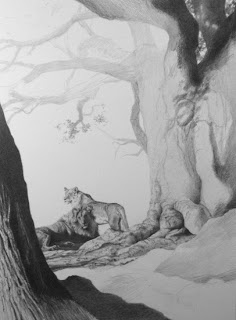 In preparing for next month's Waterfowl Festival here on Maryland's eastern shore, I have decided that it was about time that I spent some board time developing some works based upon African subject matter as this is something that I really have not done for quite some time. As a matter of fact, I would say that it has been well over a year or longer since I have completed three or four African subject works in a row.

With my current long term commitment to works with bridges as subject matter for next summer's solo with the Woodson Museum (which dates have now been set, by the way - June 28th through August 24th) and other more domestic subjects taking priority on the board lately for gallery commitments as well, and the fact that it has been just over 6 years since my last visit to Africa, I felt it was time to dig through my reference material and get crackin' on some much loved subject matter from that wonderful continent.

Having traveled to Africa on seven different occasions since my very first trip in 1972 (that long ago!), I have certainly amassed a huge body of reference material in slide form as well as print and sketch book notations, field studies and the like. Since all my travels took place before my venture into digital photography, all of this reference has languished to some extent over the last decade as I concentrate on more 'current' inspiration as well as the massive amount of digital shots accumulated over the last 7 years.

But, since investing in a pretty good slide scanner/printer recently, I have begun to dig into pages and pages of slide sheets from the trips of the 70s, 80s and 90s. There is a tremendous amount of very fine material there to work with. The 'problem', if that is what it can be called, with all of this is simply that even with all this marvelous, good reference material to work with, time has taken its toll. Over and above some deterioration of slides, the mere fact that years and years have intervened between those trips (other than one in 2001, the last being in 1999, almost ten years ago now) and now, the immediacy of the places, the intensity of the inspiration of the moment and the desire to want to capture all the distinct memories of the sights and sounds of Africa, have faded.

I am certain that other artists will attest to the fact that once time and distance have moved in to separate oneself from 'the moment', it is often quite hard to rekindle that spark that motivated a sketch or photo or internalized memory. I have become so 'plugged into' cows and sheep and the things that surround me here in Maryland now, that moving back to times in the Serengeti takes more effort than bringing to mind the goats that just recently inspired me to complete several small works for next month.

But, having spent quite a few hours in the last two weeks, pulling out photos and slides of elephants, lions, antelopes of all descriptions, the depths of Ngorongoro Crater (probably my most favored spot on the continent of Africa), the thorn trees of the Serengeti, almost forgotten images of a place that once was the major inspiration for 90% of my yearly work, I can honestly say that my heart jumps at tackling a number of upcoming works based on all these long dormant memories.

And so, it is with great joy that I begin, today, the first of what I hope will be a half dozen pieces with the flavor of Africa flooding through all my senses. 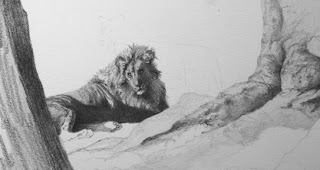 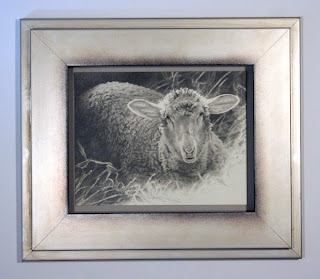 Posted by Terry Miller at 2:20 PM No comments: 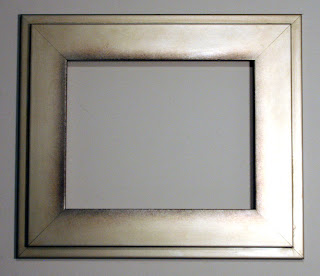 Posted by Terry Miller at 2:53 PM No comments: 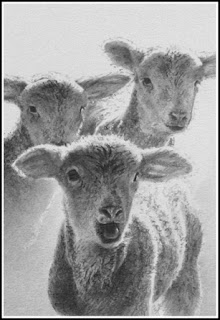 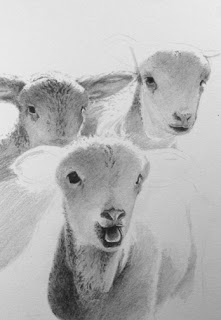 Posted by Terry Miller at 3:29 PM No comments: