Picking up where things were left yesterday . . . this first shot was taken after about an hour and a quarter of work this morning. Joining in today were my trusty F lead as well as a semi blunted tip H. I began by going over some of the 'semi finished' rocks of yesterday's work to deepen shadows and add a bit more 'noodling' on the sunlit surfaces to add more texture. I also gave a couple additional layers of 2H and H over that dark area at the upper left to bring it into more prominence as it will play an important part in helping to balance the composition once I introduce the ducks. 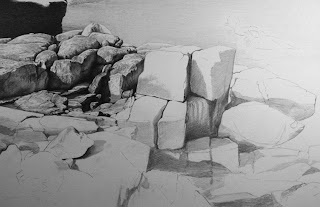 In this next shot, taken after another hour plus of work time, I've now moved over to that large and prominent block of rocks that have the heaviest shadows in the image to begin to bring it to life. I have been using the F lead as the darkest of the dark areas today, in place of the 2H from yesterday as this is helping to deepen the shadowy areas that will be closer to the viewer's eye. There is not a tremendous difference in the tonal grey quality of 2H and F but after a couple of cross hatched layers of F over themselves, the tone achieved is enough of a difference that it does pull those areas and shadows forward of the ones set yesterday with the 2H. You may well ask why I just don't go in with a B at this point and set a dark area and be done? Well, I am no where near being able to determine just how, at this stage, the overall composition is going to be balanced between lights and darks and to appear in appropriated perspective so leaving myself the ability to always come back in and go darker in the last half hour of work on the piece, is a good thing! 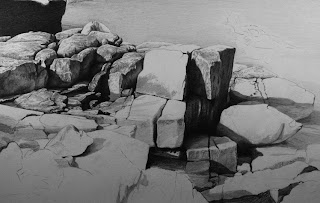 In the last shot for today, another hour's worth of work has occurred as I continue to develop the foreground rocks adding more texture and shadows to form the various elements. Most of today's work was achieved with the help of 8H, 2H, F, H, and a touch of 3H; all of these being used in layers over one another to develop the shadows and the rounding of surfaces to represent depth. In total, a bit under four hours of total drawing board time today. 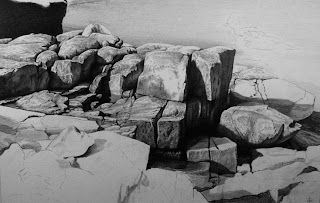 you are sooooo great at noodling those rocks...amazing!!

Very good posts! Thanks for sharing your techniques. It's interesting how everybody has their particular 'go to' pencils and tools, even with the whole gamut of them available. This piece is looking great!