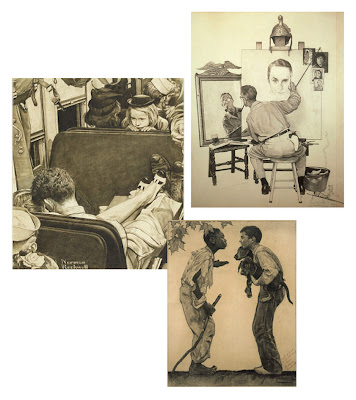 Being very unlike my usual 'need' to purchase the accompanying catalog from any museum exhibition I see, I did not do so on Sunday at the Rockwell in DC. So, it was a tough slog this morning, googling across the Internet to try and find images of several of the charcoals included in the exhibition to use as examples of what I mentioned in the previous posting about seeing Rockwell's full size 'studies' for his final oils. Unfortunately I could not find images of the several that were my favorites at the Smithsonian American Art Museum, but I did manage to come across these three which were also part of the wonderful exhibition. It's hard to imagine these as being full sized works, in the neighborhood of 4 feet by 3 feet or larger, from these small images, but they were indeed, that large. You still, though, can get an idea of the detail to which Rockwell went to work out his images prior to setting brush to canvas.
Being so plugged into composition as I am as an artist, I have thought greatly the last couple of days, as I sit at my drawing board, about the efforts that Rockwell put into his compositions. I recall that when I was in art school, all those many years ago, Rockwell's work was, to a great extent, considered to be mere illustration by many in the 'art world'. I suppose for a long period of time, I tended to follow along with the crowd and it was not till maybe twenty or twenty five years ago, after I had been dealing in more detail in my life as an artist, that I began to see how truly gifted an artist Rockwell was, and that I could learn a great deal from looking at his work.

The exhibition at the Smithsonian runs through early January and I would say it is well worth a trip into the city for an afternoon's visit.
Posted by Terry Miller at 12:56 PM

Dear Terry,
Thank you for uploading precious images of studies that I really wanted to see. (Published Rockwell's books tend to focus on finished works, even though they often mention his great studies.)
And your candid and thoughtful post touches me, too. Thank you.
Kind regards, Sadami