Oh, not second thoughts about the work as a whole, but about a bird in particular. 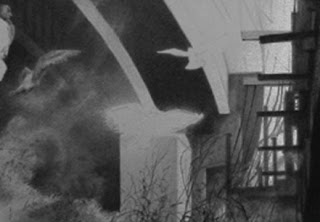 As originally sketched out, the bird that occurred in the lower part of the work, in front of the electric shed with its wings spread wide, began to disturb me as I have been working on the piece this week.

I thought a lot about it yesterday after finishing up the day's work and again, took a look before I went to bed last night and then once again this morning when I first walked into the studio to review yesterday's work. And, as often will happen while in the midst of a piece, I realized that I just did not like the placement of that particular bird. It began to distract me as I worked areas around it and the more I looked at the overall image and compositional elements, I liked that darn bird less and less.

So, with cautious approach and kneaded eraser in hand, I wiped out that bothersome bird and replaced that fifth animal element with . . . 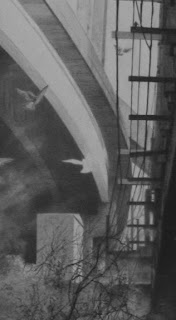 . . . a smaller, more distant bird more central in the image.


It became very apparent to me, once I had done this, the composition worked much better and the movement that the birds are going to create will also be more supportive of everything else that is going on. With the major thrust of the piece being that circular movement coming in from the left, meeting up with the strong vertical and downward thrust of the extreme right side, all seems very well now!

Sometimes, it just takes a second and even a third look at a composition, even while working on it, to determine if all the elements are working. So, here is today's addition . . . 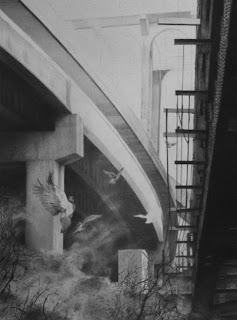