May I see the BIG envelope, please! 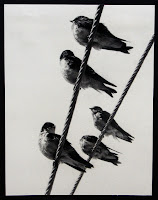 Well, for those 'in the know', I received the BIG envelope in the mail yesterday from the Woodson! For those who are not in the know, what that means is that I have had a work, 'I Hear You Singing in the Wire', juried into this year's Birds in Art exhibition that will open in early September at the Leigh Yawkey Woodson Art Museum in Wausau, Wisconsin.


Birds in Art is an annual juried exhibition originated at the Woodson some thirty plus years ago, and one that draws entries from all over the world, as hundreds and hundreds of artists compete for one of about 95 spots in the final exhibition and inclusion in the beautiful catalog of the event. This annual fall event not only is the 'flagship' event of the Woodson, but as Kathy Kelsey Foley, the museum's long time director has said, 'Birds in Art continues to delight and instruct, appealing to wide-ranging audiences on multiple levels. The exhibition offers something for the art lover, the bird fancier, the conservationist, and the ornithologist.' I have been honored to have had works included in all but one of the last 17 years of the exhibition and to have toured with the touring portion in all but three of those 16 years of being a part of such a well respected body of animal art.

As long time viewers of this blog will recall, I posted a number of photos from last year's exhibition in late September showing some of the works that were my favorites as well as a number of my artist friends, who were fortunate enough to have made it through the jury as well. This year's jury reviewed 1015 entries from 631 artists. Considering the fact that the exhibition usually comprises no more than 115 to 120 works each year, you can imagine that there is a lot of work that is kicked out during the jury process! For those of us who make it through the cut, it is a wonderful result, indeed, as it is quite apparent that any number of fine works of art just can not be included in the final total.

With the chance for only one work to be spotlighted for each included artist, those who submit to the jury each year take great pains to do a work that will not only represent their very best effort as a fine artist, but to be able to, in some way, capture the attention of the three member jury in such a way as to out shine those works that are seen just before and just after, as the images are flashed on the screen. This topic, just how to grab the jury and make them want to include your work, is a never ending discussion that continues year after year between myself and fellow artists, both those whose reputation is well established and young artists just starting out on long careers. I have often wondered just what a juror might be looking for when viewing a thousand images of art. In the end though, there never seems to be a good resolution to the question and all of us continue to try and do our very best each year and take our chances along with the hundreds of other artists who do the very same.

And so, it will be time soon, to make the reservations for the opening weekend in Wausau and to look forward to seeing just who made the cut, what works will be the ones that hit the top of my list of favorites and to catch up with friends who I might not see but once a year, if we are all lucky enough to have 'made the cut.'
Posted by Terry Miller at 8:21 AM

Congratulations, Terry!! I'm still awaiting my annual ritual of the opening of the puny little envelope.