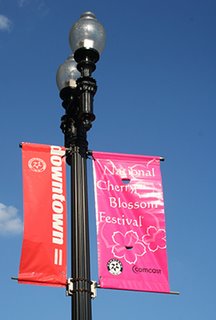 After a morning that broke with ominous looking skies and threatening, broiling, slate gray clouds billowing in from the west, I headed into DC after meeting up with a friend, to be part of 'Cherry Blossom Weekend'. With the skies showing signs of storms and a sprinkle or two falling from those gray clouds while traveling downtown on the Metro, we arrived to find skies clearing over Washington and eventually, after a walk down the National Mall along with thousands of other 'tourists' in town for the Festival, the ring of pale pink and cherry blossom white gleamed in the rapidly sunning up sky near the Jefferson Memorial. There seemed to be as many people walking the shore as there were blossoms on the trees, so after some photography to capture 'the moment' and a brief walk around, a walk back across town and lunch, my time of playing hooky from the studio just about came to an end. An evening concert at the University of Maryland, featuring the Symphony Orchestra magnificently performing the Mahler 9th, oh what a spectacular piece of music that be . . . 'play time' finally ended as I headed home around midnight with thoughts of the extra hours that would need to be worked in the studio today, to catch up! Play time is good and much needed every so often, but alas, the looming June show in Annapolis will make for a long work day today! I wouldn't have it any other way. 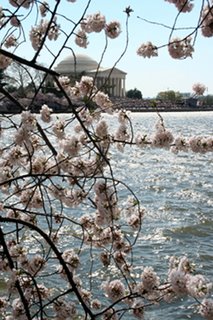